On my typical circuit on my property I cover a good bit of ground in a loop. Half way through this circuit is a nice piece of high ground and a great place to build a range shelter. It's a semi permanent camp that I'll use through out the year, either for over nights or lunch.

I set out today to build this shelter with my Norse Hawk. I've been reading some discussions regarding hawk vs hatchet or axe and since I do actually use a hawk this would be a good chance to post some pics of it. Where I am, in the southern tip of the Boreal where it dips into the states, the hardest wood I have is Maple and Ironwood, not a lot of the latter, plenty of the former. Most of our wood is soft, Birch, Pines, Poplar, Basswood and so on.

I own nearly every size axe that Wetterlings has built, including the 19" which is the closest approximation of my Norse hawk, which I have had for going on fifteen years now. The weight difference between the two is considerable. Because the hawk is light and I've reprofiled the edge I can do more with it over time, and expend less energy than if I was using a 19" Wetterlings simply because of the weight difference. Since I'll be cutting and limbing pines, I don't need the weight of the axe. It's more about speed and angle.

It might not look like much but this is where I'll build the shelter. The north wind blocked by the big pine.

In this image I've got my poles cut and I've limbed them, I used the boughs for the bedding. You can see a birch log rolled up tight to the boughs, I've driven two stakes into the ground to keep it from rolling forward. This lets me keep the bedding thick with no worries of rolling out of it. It also allows me to plane a flat on the Birch log for sitting while in the shelter. That too will be done with the hawk. 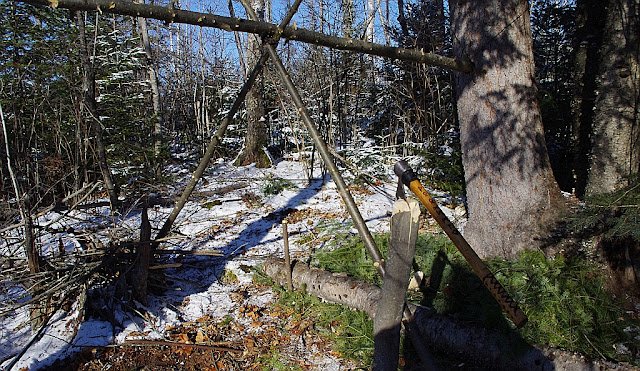 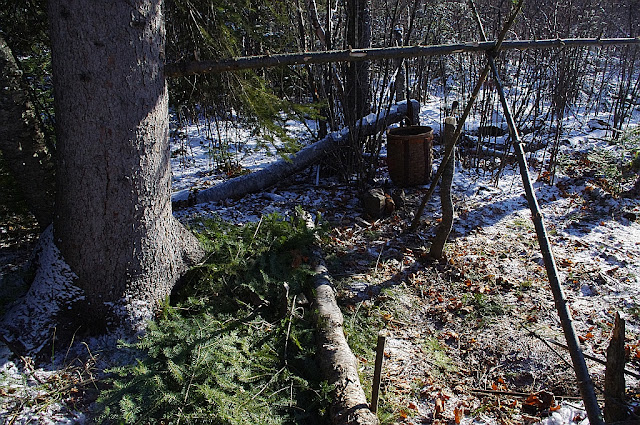 Laying in the rest of the supporting poles, you can also see all the boughs all over the place now, from limbing those pines. Primary ridge pole is secured to the main tree via 550, then to the a-frame of two other poles. Basically I wanted to have the bed area covered, and a bit of a working and sitting area in front of the fire. 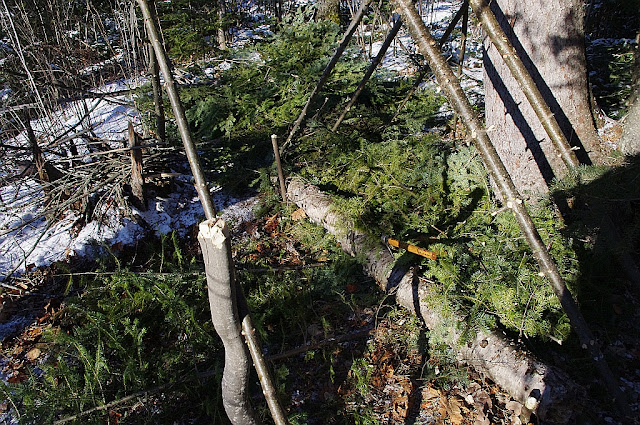 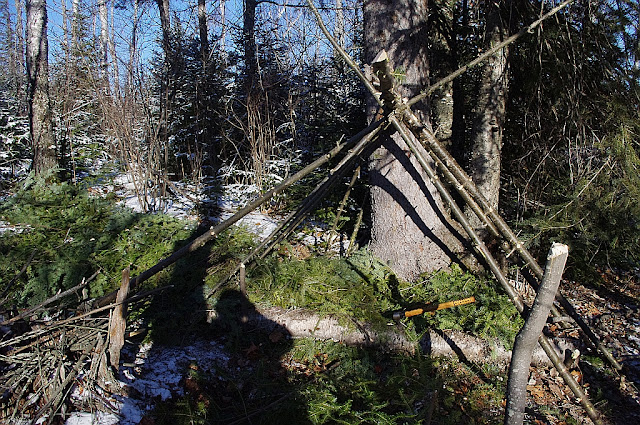 Because I knew I was going to do this, I previously ordered two of those casualty blankets from Bushcraft Outfitters. I wanted to make what amounts to reflector over on a shelter. In the image below you can see the back wall is one of those blankets. 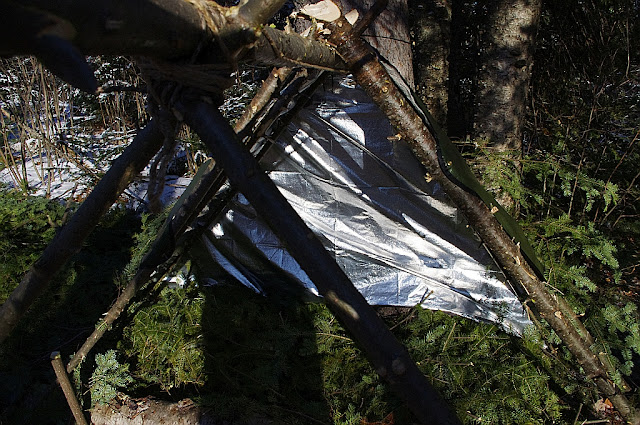 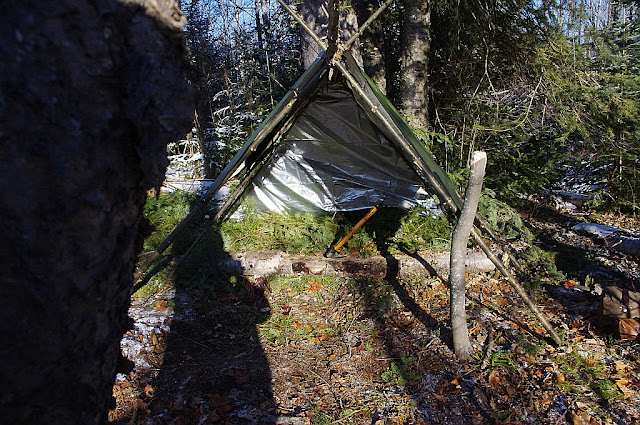 Now for the overhead, this one was positioned over the entire frame, doubling over the part of the first reflective blanket. It came forward and down to exactly where I wanted it to as the whole thing will be covered over eventually. 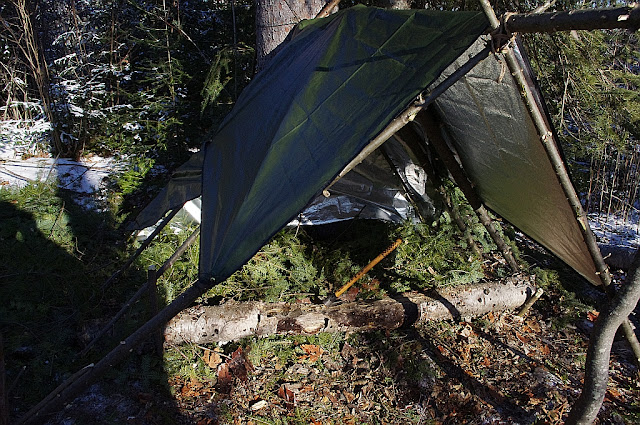 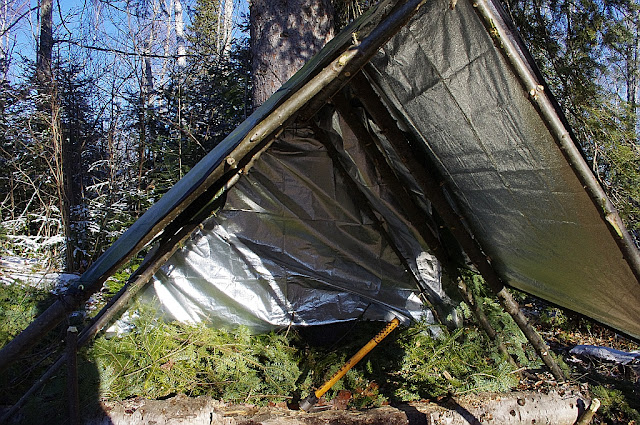 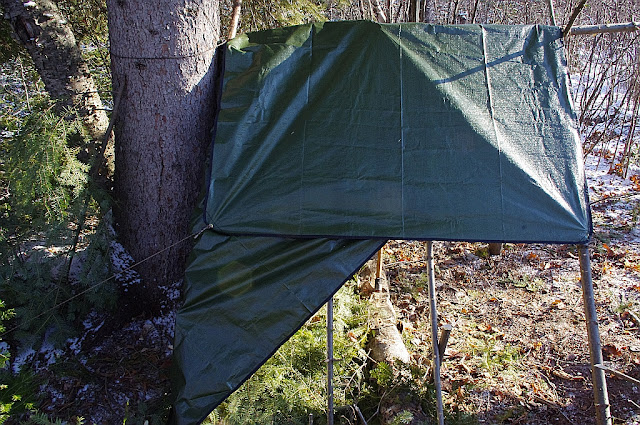 As you can see in the next couple images I stacked some Birch logs against that forward tree, these will form a reflective wall. When I get back out there I'll be taking a single regular space blanket and affixing it to that wall of logs in order to make a really nice reflector. That aught to bounce plenty of light and heat into the shelter. 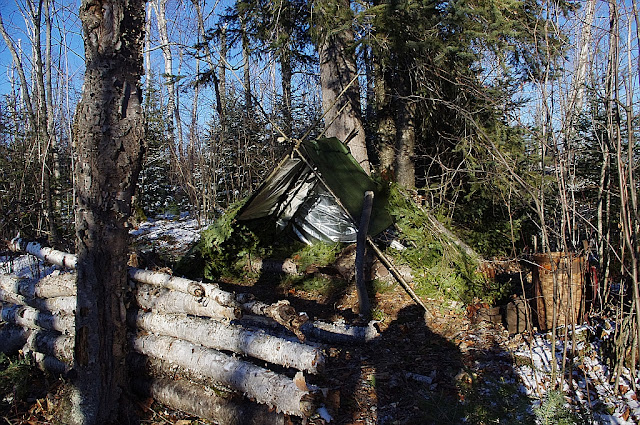 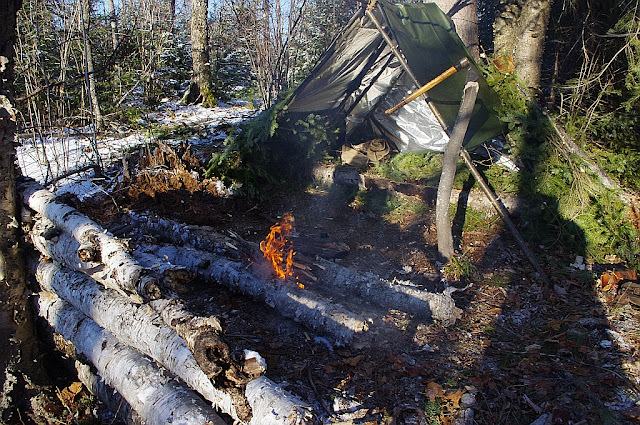 Time for some coffee and bacon, little break to refuel. 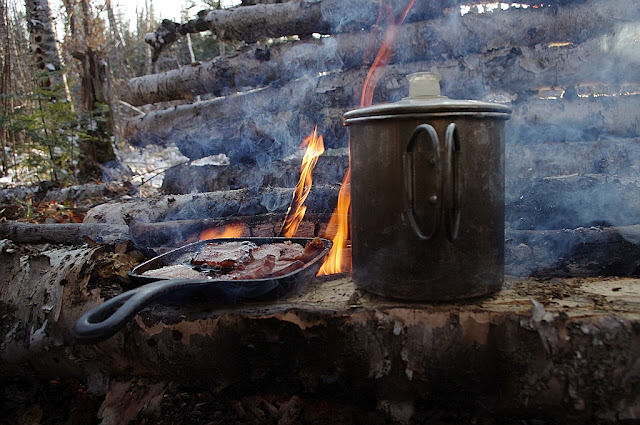 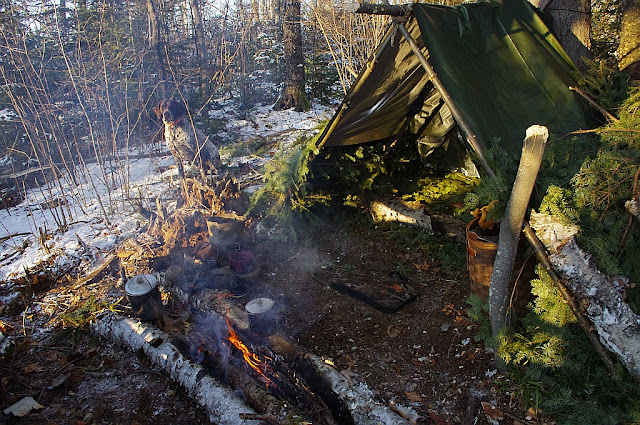 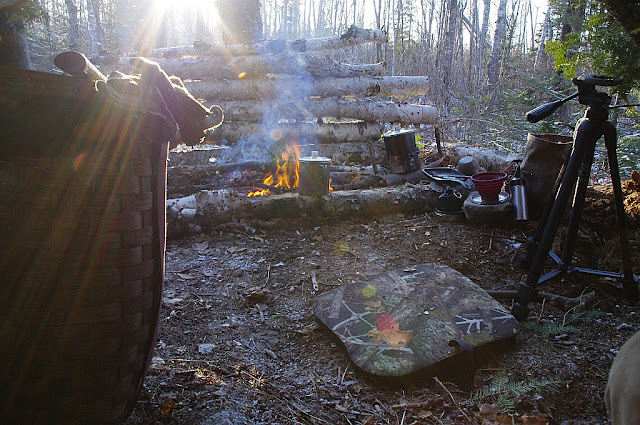 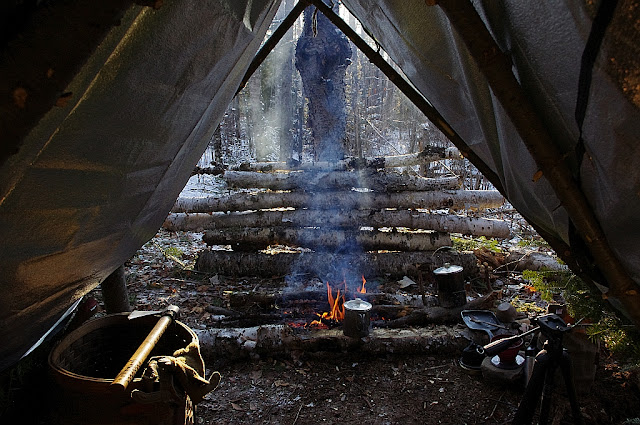 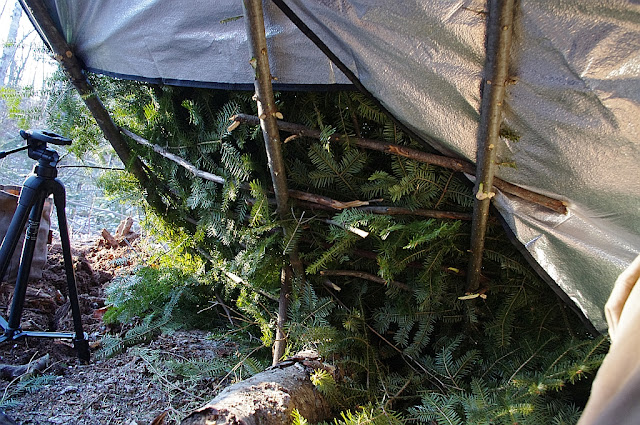 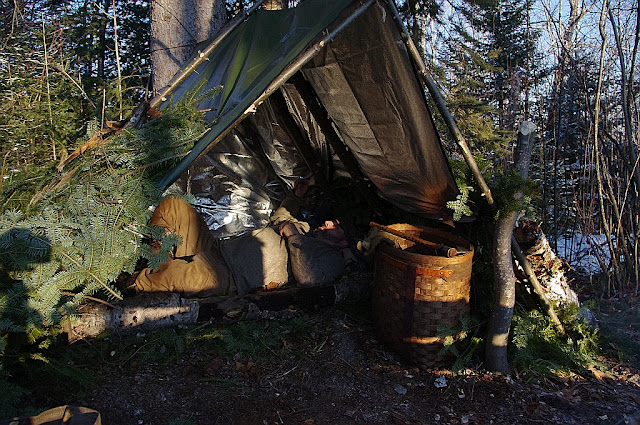 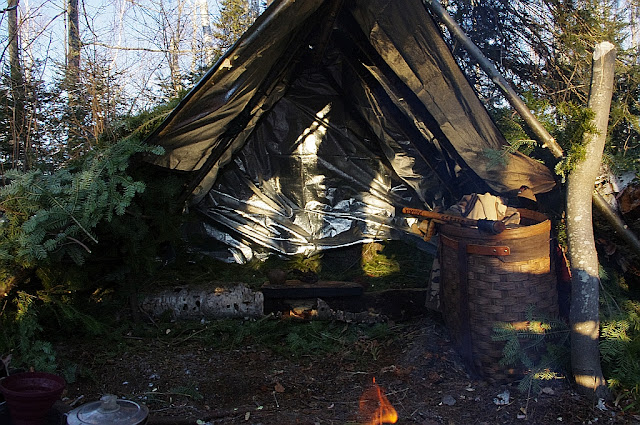 Time to enjoy the after bacon smoke! Camp is quite warm and cozy. 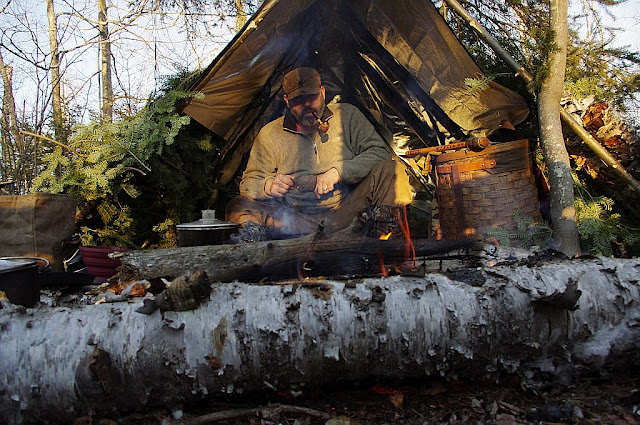 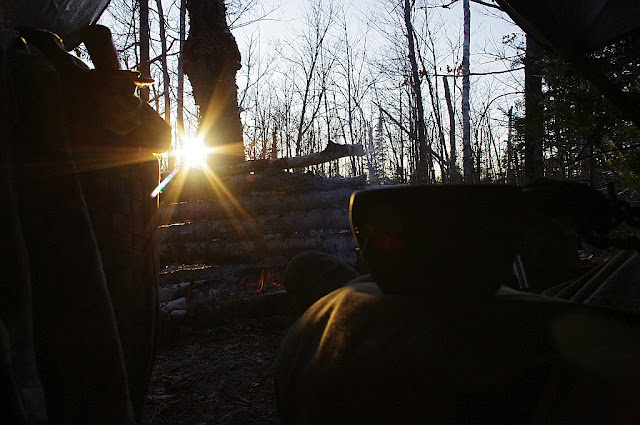 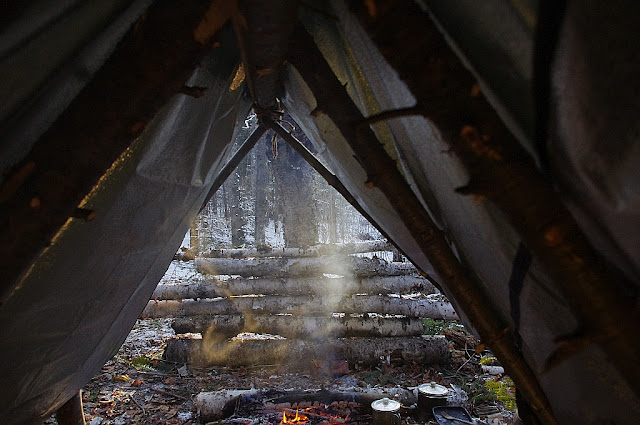 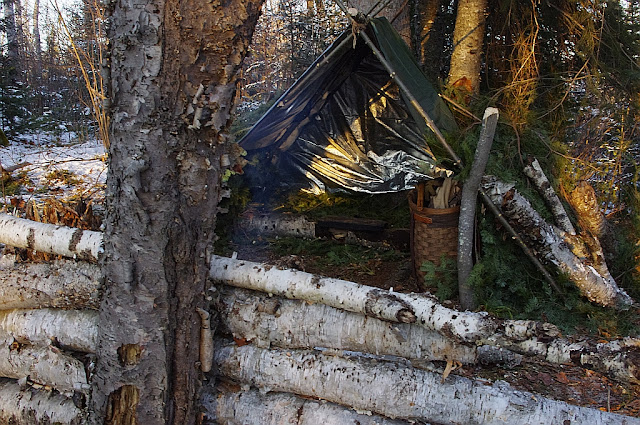 All work was done with that hawk, from start to finish.

Next time I'm out there I'll improve it some more, add the mylar to the reflective log wall, add more covering, straighten out the interior. I also intend to cut a piece of 6mil plastic for a front covering, turning it into a modified Mors supershelter.

This isn't the first time I've built a shelter with a hawk, I know from experience that the weight between this Norse hawk and the same length Wetterlings is huge, a lot of extraneous energy would have been wasted swinging that axe, when the same number of swings with the hawk was getting the job done.

For where I live, a hawk is perfectly viable option over an axe, especially if you have a bucksaw in your kit, which I do. It makes for a perfect combination, seeing as how my hawk and saw combined still weigh slightly less than a 19" Wetterlings or comparably sized Gransfor.

Will update this continuously as I revisit my Norse Hawk Camp. Thanks for looking!
Posted by Cro at 18:38