Sometimes the Decision is Already Made...

On the opening day of deer season I took my son hunting. He's been hunting before but this would be his first season behind the gun guided by me with the intent of him taking his first deer. One hour into the first day of the season he was breathing slow as he dropped the hammer on the old thuty-thuty and had his first deer on the ground. He was both happy and sad, and excited to say the least. I was proud of him and I was proud to have shared the moment. My first deer was on my own and while it was something it wasn't what it could have been, I didn't have that moment with my dad.

Here's second son after taking, cleaning, and packing his deer up for the trek out. 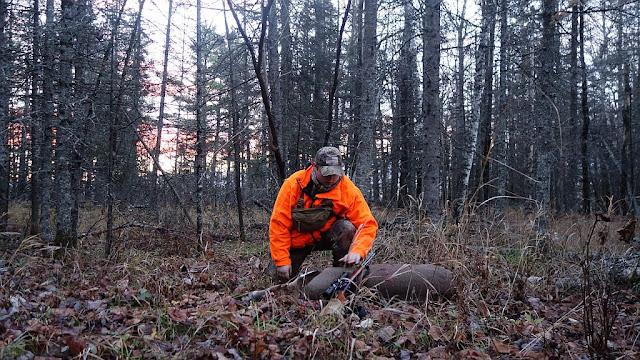 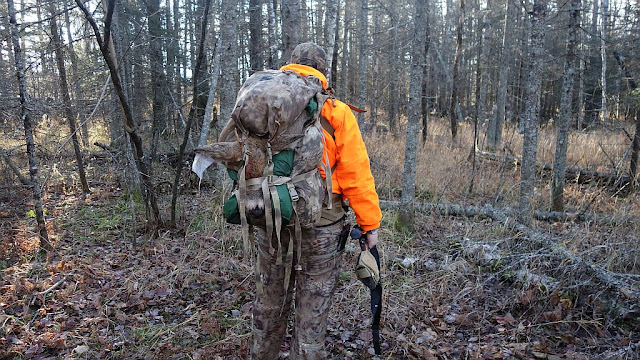 A week passes and after traveling out of town I came home to my eldest daughter's request to take her hunting. She'd finished her hunter ed and purchased her license. Eldest daughter has pretty much moved out at this point though she still comes by frequent like, and she keeps a room here, for all intents and purposes she's moved on. I had always regretted the fact that she hadn't gone hunting with me that much if at all in our past. Timing was usually wrong or her interests were elsewhere. I was quite surprised and pleasantly so, that she wanted to go.

So second son and I outfitted her and made a plan for Saturday morning. I swung by her place at 0540 that morning and off we went. Our hunting ground was the same as it was for second son, meaning we had to cross the river before dawn. I loaned her my Wiggy Waders, which by the way are worth more than twice their cost. I've used them repeatedly at this point, both in Alaska and locally and they are wearing like iron. For what little they weigh and how little they cost, I'm sold on their utility and at this point their durability. Anyway, she crossed the river in the predawn hour without kerfuffle and up the mountain we went.

Our first sitting spot wasn't that far from where second son took his deer. High ground, an outcropping of sorts between two valleys. Deer like to pass through there and often bed down there  for their midday siesta. We sat patiently with our backs to some trees near the edge of where the mountain dropped off.

It would seem that 0500 starts to the day are not the norm for eldest daughter... 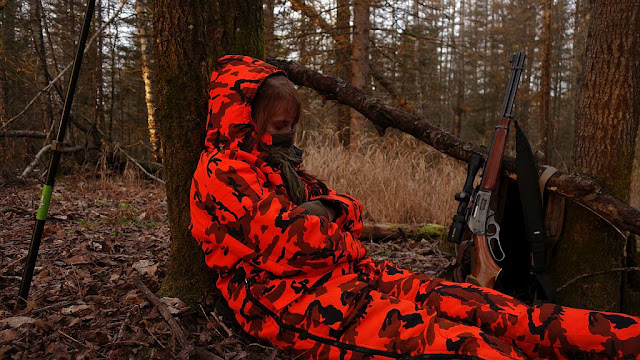 Time passed and we saw no deer. I made the call to wind it up to do some still hunting through the timber and off we went. We covered several miles of timber, and kicked up a couple does here and there but in this particular area it is buck only so kept moving.

Not long after noon we took up  another sitting spot, this time with daughter and second son looking to our fore and I kept an eye behind us. Not long into the sit we had does moving through our area. They passed peacefully on and we continued our vigil. 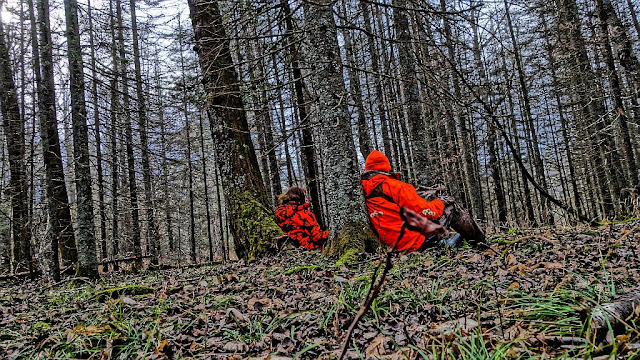 Nearing 230 I spied a buck moving funny like in the dense brush, gave the psst psst to daughter who moved to the rear of her tree and got ready. I went back to watching the buck. He was obviously hurt, he was putting no weight on his left front leg at all but was moving at a fair clip on the same path and direction as the doe had taken thirty minutes before.

Daughter had the rifle to her shoulder and was trying to pace with the buck who was moving surprisingly quickly through the dense under brush. He passed in front of her and beyond, she lowered her rifle, it was clear she wasn't comfortably taking the shot. I'd been watching her and him,, I felt both proud and frustrated, she was making a mature decision, had kept her composure, yet I wanted badly for her to take her first deer. Still, I wasn't going to let a clearly injured animal suffer any longer. I shouldered my rifle and fired, it was a quick matter, the decision wasn't even consciously made, the buck dropped instantly.

She wasn't put off and was still excited, I've known people twice her age with less than half her composure and patience.

When we walked up to the deer it was very obvious as to why he'd been limping. Someone had taken a very marginal shot, at a very steep quartering away if not straight away angle and had put a bullet through the muscle of the shoulder from rear to front. The wound had stopped bleeding sometime ago but was extremely swollen and it was clear it was going bad, infection was setting in. In the image below the entry point is on the right. The forward part of the shoulder was blown out. My bullet had entered behind the shoulder smack through both lungs, he died instantly. 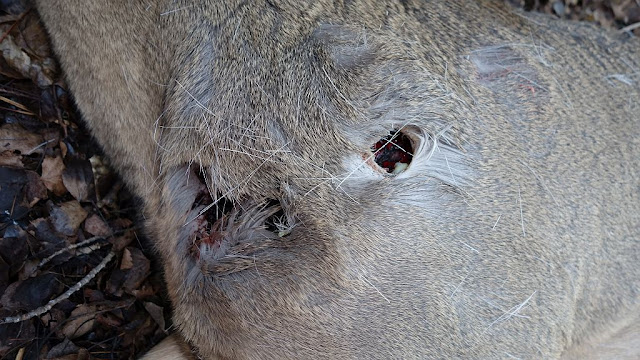 Seeing what I was up against I sent son and daughter back to their posts watching the trail about a hundred yards away and set about cleaning the buck.

It took me about an hour to clean and butcher him, I prefer to completely de-bone in the field regardless of animal type and pack them out. When I got to his injured shoulder it was clear that it wasn't salvageable. It was infected deep into the muscle tissue, it's unlikely in my mind that he'd have lived another week but that week would have been sheer agony. More than once I had some choice words for whomever had shot the animal from such a bad position, the deer must have been facing nearly directly away from that person, there was no humane shot position available and it never should have been taken.

Work complete and the meat in the game bags I loaded them into the Kifaru Meat Bag inside my pack and mounted it up for the walk out. 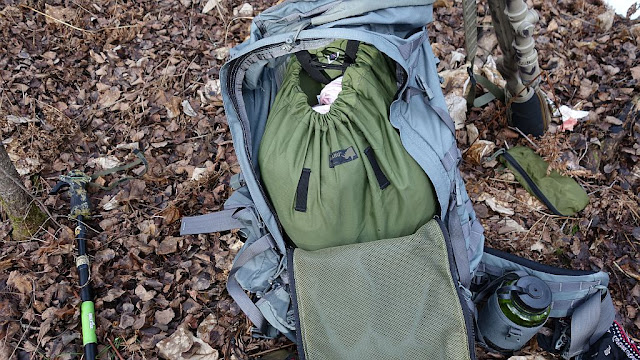 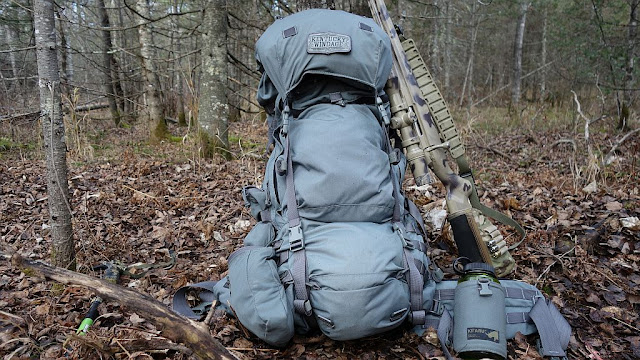 We hiked out and talked of the day, of the hunt and things in general. I admit to being quite happy to have two of my children in the field with me. And happier still that eldest daughter has a passion to hunt and the temperament to do it ethically.
Posted by Cro at 15:48 7 comments: