It was a dark and stormy night, the highway was empty, black and wet. The double yellow vaguely illuminated by the headlights, a ding sounded twice, the low air warning flashing on the dashboard. The right rear tire was under inflated...

It was a cold morning, the sun hadn't cleared the horizon, he could see his breath on the air as he walked to his car. "Crap" he said as he noticed the flat tire...

He saw the hazards flashing in the distance and began to slow. The car was pulled off the road onto the shoulder and a woman was standing at the rear of it with cell phone in hand. He pulled off behind her and noticed she had a flat...

He had driven the old logging road earlier that day, heading to his favorite neck of the woods. After spending the day afield with his best dog he returned to the truck only to find he had a flat tire...
After spending a day on the water and the sun sinking behind the mountains the couple pushed their boat towards the docks.

Their faces red and windblown, smiling but tired. With the boat waiting at the ramp to be loaded on the trailer they found one of the trailer tires flat... 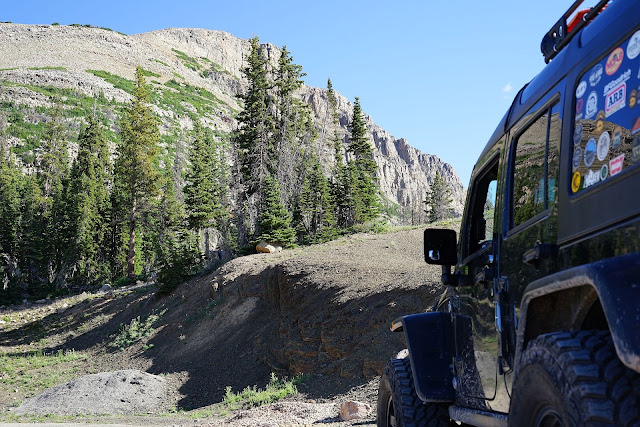 You don't have to be a hard core off road enthusiast to appreciate the ability to air up a tire without needing roadside assistance or a gas station's air pump. Needing air in a tire is one of the most common occurrences motorists face on the road, and off.

I had been looking at various options for a vehicle based air compressor.  Some were mounted and others were not. Prices ranged from under $100 to over $600. Those over $250 were eliminated as they didn't fit my budget, and some of them which required mounting and plumbing of air lines were overkill for what I wanted. I'd come to the conclusion that I wanted a mobile air compressor, not overly large but still capable of inflating large tires.

After reading multiple reviews and recommendations for several products I finally decided to give the Air Armor M240 a go.

Here's the description provided on Amazon for the M240; 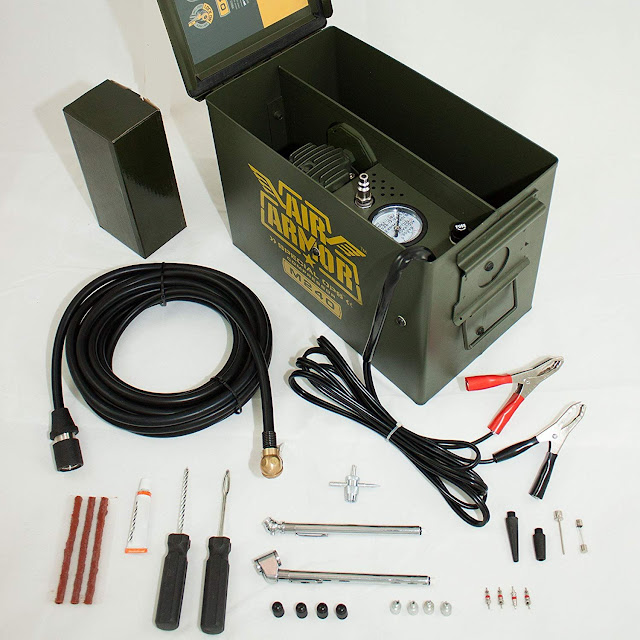 CONVENIENCE: The M240 12v air compressor powers directly from your vehicle’s battery and delivers air with a 25’ service hose. Included is a box of tire parts, tools, and accessories. All this in a tough as nails steel storage locker to have with you where ever you go.


MULTIPLE USES: You won’t be the operator caught dead on the road because you lost a part in the dirt - the M240 air pump has your back. Packed in the accessory box is an arsenal of 27 tire care and repair parts which includes a tire repair kit, 4-way tire valve tool, 2 gauges and an assortment of commonly lost or damaged tire parts like valve caps and cores.


EASY TO USE: At the core of the M240 is a 12-Volt, direct drive, high volume air compressor with a 10’power cord that clips directly to your vehicle’s battery. This 40mm powerhouse provides optimal performance in the critical tire inflation pressure range. Delivering 2.11 CFM you can inflate a full size truck tire in less than 2 minutes. Fully inflate a 35” tire from 0-35 PSI in less than 5 minutes. The system boasts an instrument panel with built-in air pressure gauge and type "M" style 1/4" air fitting to attach the unprecedented 25’ straight easy-to-coil air hose with lock-on ball foot commercial air chuck. Airing up has never been easier thanks to an extended 50% duty cycle and hose that reaches all 4 tires of even the longest wheelbase vehicles.


GREAT GIFT IDEA: The perfect gift for the rugged off road, outdoor enthusiast, Jeep owner who needs to air up and air down quickly and easily. A popular item with our Military and First Responder customers.


I purchased one on September 17th of 2017 and I've since used it countless times. A six week road trip exploring the American West in 2018, I used it every day. This was because I was airing down for a trail and then airing up again after finishing the trail. I covered over 6,000 miles on this trip, much of it off road in the back country of Utah, Colorado, Idaho, and Wyoming.Early on in the trip I was in Idaho on a trail that would put me in Wyoming. The road started as a rough gravel washboard road and eventually turned into a dirt and rock goat path. I aired down and like an idiot, set the M240 on my trailer's tongue box and drove off. Three miles later I realized what I'd forgot, turned the jeep around and headed back. I found the M240 scattered across the rough gravel road. It had fallen off and hit the road at probably 25mph. The ammo box was separated from the lid and the components were scattered about. I wasn't hopeful.

I reconnected the lid to the box, hooked the alligator clips to the battery terminals and hit the switch. The unit fired right up and worked just fine! The images below are post fall. 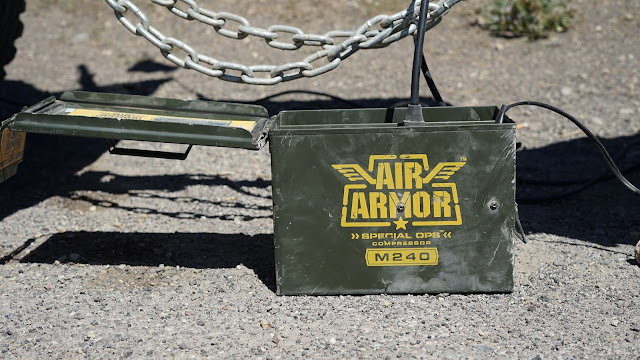 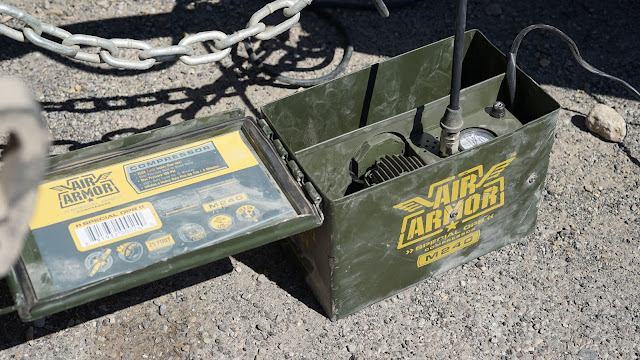 I'm running 35x12.50s, these are some large beefy tires. Typically I'm running 37psi on the street and air down to 23-25psi on the trail. Super slow rock crawly type stuff and I'll air down into the teens. For most of this specific trip however, the lowest I went was 23psi.

The M240 has a claimed CFM (Cubic Feet Per Minute) of 2.11.  To be able to inflate a 35" tire from 0-35psi in less than five minutes. While nearly all of my re-inflation efforts were quick, I don't know if the 0-35psi claim is realistic. On average, to inflate from 23 to 37 took about 3 minutes per tire.  The speed can be affected by the battery the unit is drawing from and heat generation of the compressor. There are some other factors but they tend to be not as impacting as battery and heat. I'm sure elevation has an impact as well but I don't know how much of one.

For the non off-roading type the unit is still a worthwhile purchase. The scenarios at the beginning of this article are common and could be resolved with a unit like the M240. A can of Fixaflat could potentially resolve them as well, however, there are a number of reasons you might not want to use Fixaflat. Tire Repair With Fixaflat-Use Caution lists the some of the reasons.

Having owned the M240 for a year, and used it extensively I can recommend the unit with a couple caveats.

1. If you're planning to use the unit to inflate tires larger than 35" you're going to have issues.
2. If you are inflating 35" tires it's likely going to take a little longer than the advertised times.

It's a quality product that fit my needs and performed as expected. Even exceeded my expectations when it comes to durability.