I was tagged by Survival Logic to name my top three pieces of gear. I've been considering it since he did so and I have to admit that I'm having a hard time narrowing it down to just three. Part of the problem is seasonal, what I carry in each season differs to one extent or the other, and what I'm about while I'm out. After having put some thought into it I came to my conclusions by recognizing there are some things that are always with me regardless of the season. I narrowed that down, hard as it was, to the following three.

As much as I enjoy building shelters in the wild, hewing them from natural materials. Building a lean-to or a wickiup from what is at hand is a rather romanticized but worthy skill to have. I've found over the years that I prefer to carry a lightweight shelter that goes up quick, is waterproof and makes getting oneself under shelter as efficient and easy as possible.

My relationship with tarps has been love hate for a number of years, more hate in the beginning and less so over the past few years. I've tried the cheapest, had a few of the most expensive, from the lightest in weight to the heaviest canvas duck. For one reason or another I found something lacking in each that just became deal breakers for me. The noise of the cheap ones, the weight of the canvas ones, the durability or lack thereof of the lightest ones, and then I ran into 70D 1.9 ounce ripstop nylon with a urethane coating and multiple tabs logically and soundly affixed, in two sizes. A 10x10 and a 5x7 BCUSA tarps.

The 10x10 BCUSA tarp gets used on longer trips where multiple overnight stays will happen, canoeing the Boundary Waters for example. Its sixteen tabs make short work of set up and no matter how taught I've pulled the lines they've never slipped or failed. It has shed water like a duck's back and blocked wind like a brick wall. However, it has taken a back seat to a pair of the 5x7s for my backwoods carry. I still use it mind you, but mostly for canoe cruising and longer trips, it doesn't have a permanent spot in my pack though.

I have a pair of the BCUSA 5x7s, the MEST (Multipurpose Emergency Survival Tarps) as they call them. One in woodland and the other in multicam. The weight of the both of them is less than the multicam 10x10, and since there are two of them the diversity of set ups and uses is double that of a single 10x10.

So item number one is quick shelter in the form of a pair 5x7 BCUSA tarps, these do have a permanent spot in my pack. Pictured below is the woodland version set up to keep me dry during a brief rainstorm. 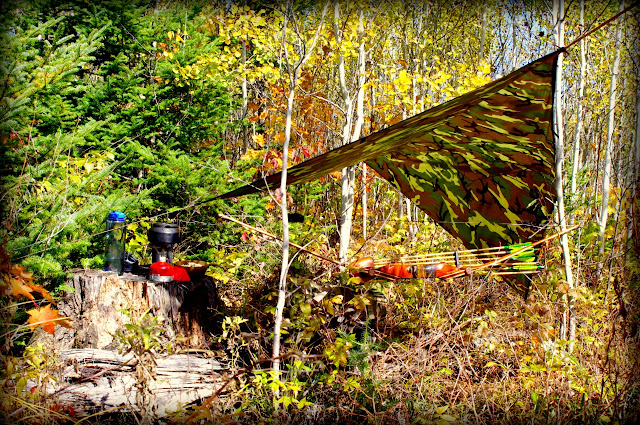 This is the second tarp, it rides atop my pack with a woobie inside of it that doubles as a blanket. Between these two items and a fire I've got three season shelter capability. 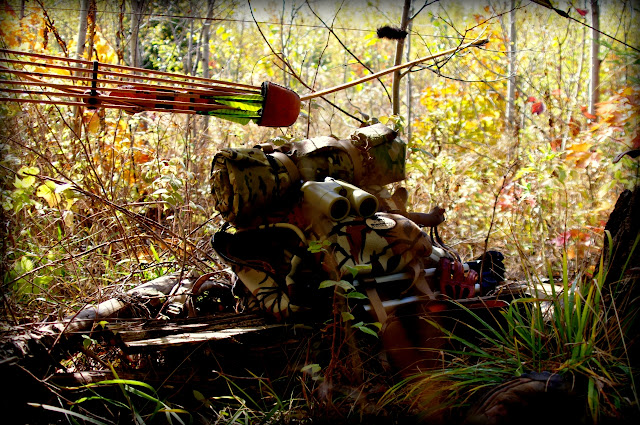 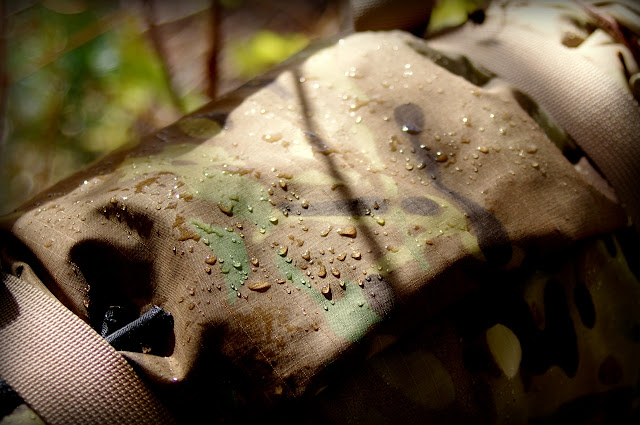 While I like to think of myself as a pragmatist, and I am, I decided to part ways here from the traditional useful selection and go with something that some might think of as not necessarily a piece of gear. Well I assure you it is. It's a hat. That's right, a head cover. It keeps the sun from my eyes when walking into it, the rain off my face and glasses, keeps the sweat from running into my eyes, not to mention keeping my head warm. It has also become a bit of a memory carrier as well.

It is a wool hat, and affixed to the leather band are memories. Two of my fondest, a four hundred pound black bear a few years ago, and my first grouse taken on the wing with my longbow. From the bear the right index claw, from the grouse the foot. 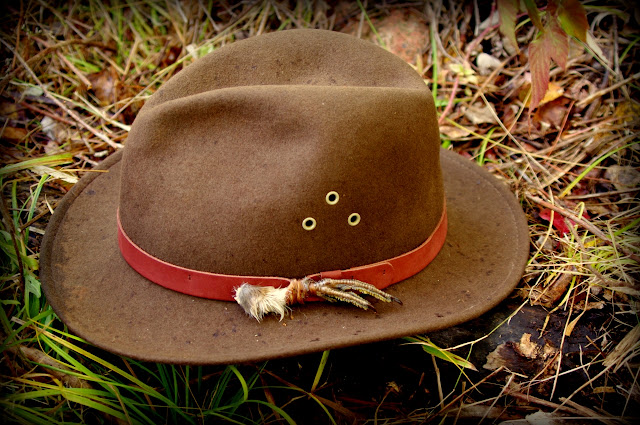 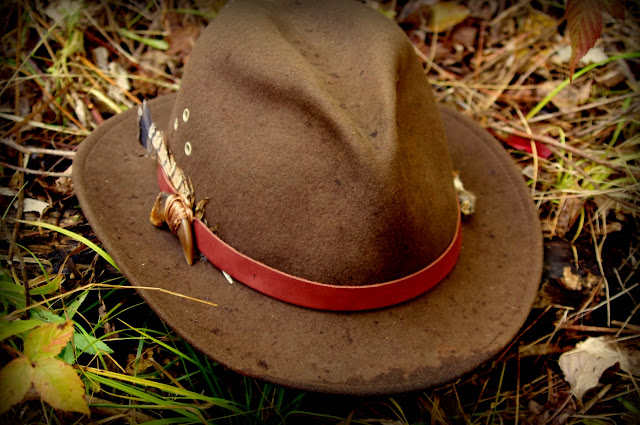 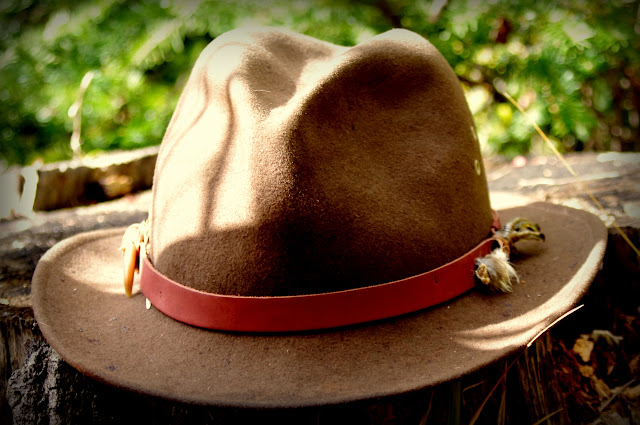 Inside the crown of the hat I carry a Kuiu 185gram Merino wool beanie. When the wind turns foul and chill I put the beanie on, down over my ears then put my hat back on thus maintaining all of its broad brim benefits plus warm ears to boot. 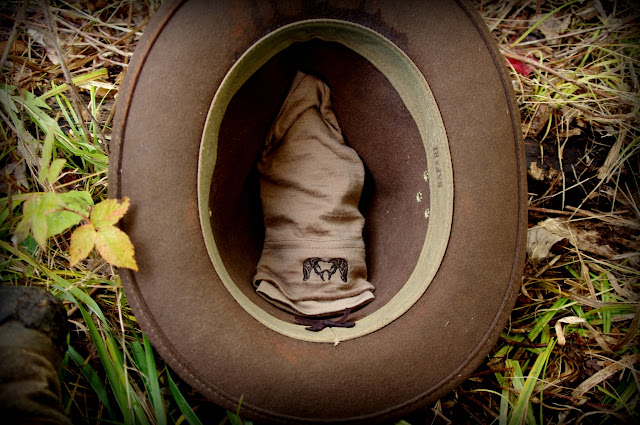 Also inside the hat behind the sweat band I keep two packets of steristrip wound closures. I work and play with sharp instruments, from axes, and knives, to broad heads. A cut now and again happens, and if there's a bad one then the wound needs closing as best as possible until proper care can be had. These will work for that in a pinch.

Additionally, because hats get loose I also carry some long green pine needles behind that same sweat band. This pads out the hat so if fits nice and snug, add or remove needles as needed to keep the fit just right. They also impart a nice pine scent to the hat, keeping it smelling pleasant. 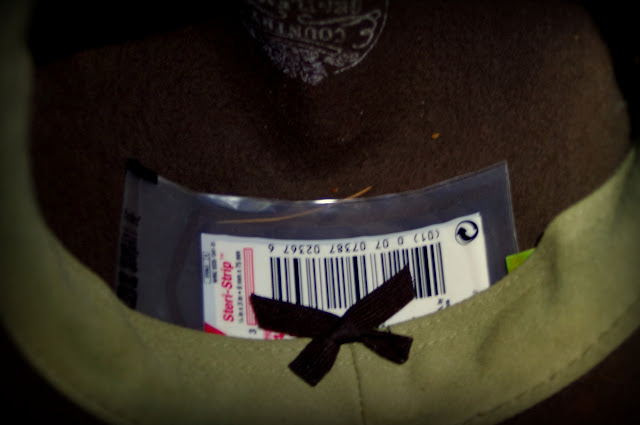 A good hat is like a good friend, always there, reliable and hardy, through the best and worst weather. They seem to be just as hard to find as good friends as well.

Which brings us to my third choice. This was the hardest I guess, as I have a fondness for all my gear. At first I thought this should be a knife, then realized I carry many different ones and cannot lay the mantle of favorite on any one of them. Each gets grabbed and used frequently, none neglected. Then I thought to name a favorite pair of boots but couldn't do that either for nearly the same reasons. Different seasons get different footwear and sometimes multiple different pairs of boots within the same season, no neither of them was going to do as the third choice.

A pair of good field glasses, no, that wasn't going to work either because I don't carry them on every outing. As much as I love my Leupold glasses they were not it, though they close enough to warrant a picture. 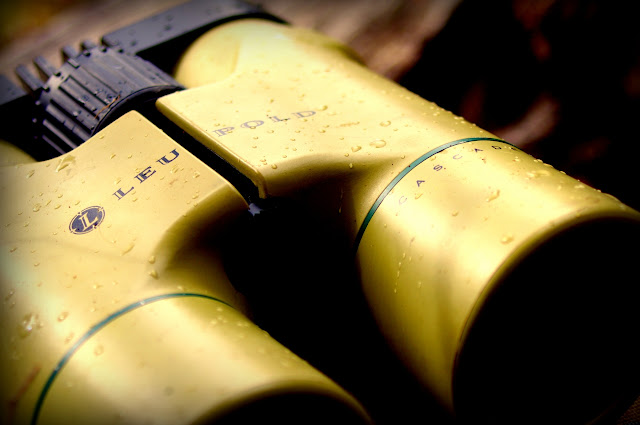 Then what about a pack? God knows I love my packs but again I don't always grab the same one. For day hikes and hunting I've been using my Bison Gear heavily, but for water based adventures Frost River still holds top billing, and since I've named them both, both get a picture but they are not third spot. 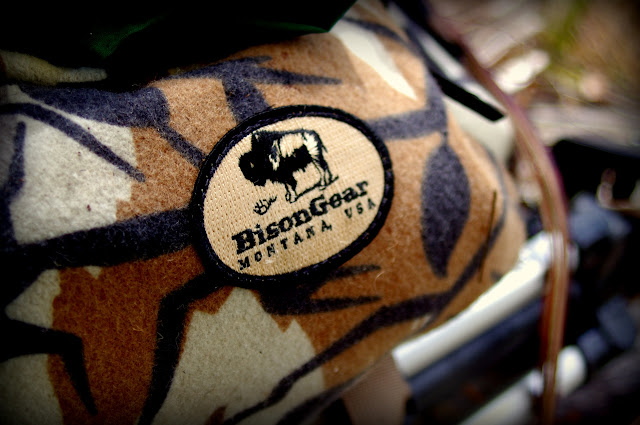 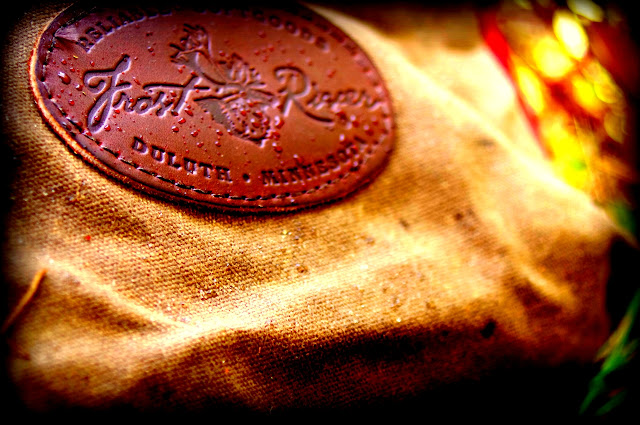 So what is the third piece of gear that I always have with me on all of my outings? What I document them with visually.

I've never had any formal photography training, just fiddled with cameras over the years. From point and shoots, to betweeners, to the DSLR I use now. A Pentax KX. So here's the third item in my most carried favorite list. 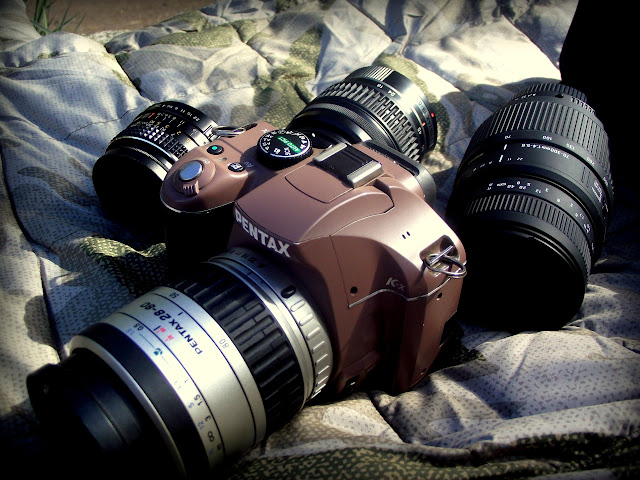 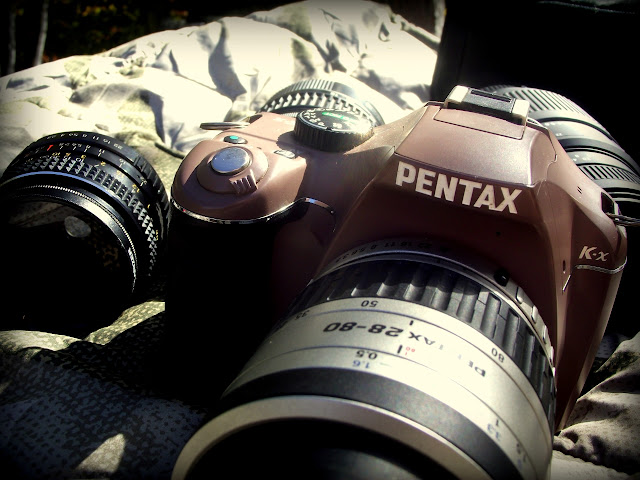 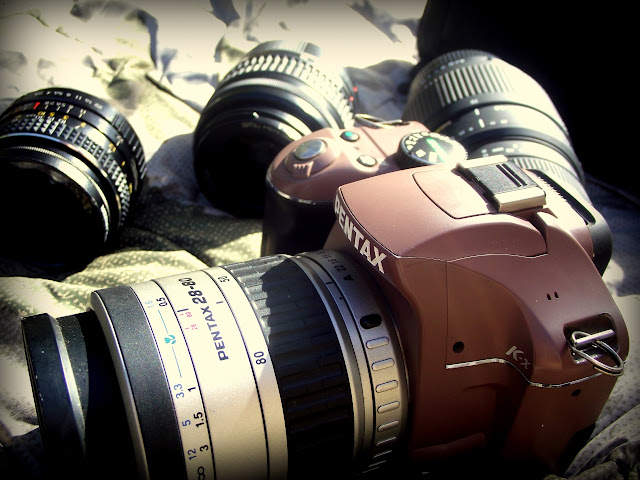 While memories are great and I'm a number one fan, they tend to fade sometimes. Coloring differently with time, little nuances change. Stealing a moment from time, fixing it permanently as it was, to be unaltered by the passage of months or years. I'm not sure if they should be called cameras, rather collectors of moments, places, things, and thus my third most favorite piece of gear.