Minnesota archery season opened on Saturday the 19th so second son and I hiked up the river to our favorite camping spot. We only had Saturday to hunt as we had a lot of things to get done on Sunday. It's early too so as much as we like to bowhunt neither of us wants to really end a season on the first day. Sometimes it is enough to just be in the greedwood, bow in hand and walking the mountainsides.

The path down to the river is worn away, the river sees a lot of hikers and fishermen through the summer. Come the fall though we usually have the place to ourselves, post snow and freeze I've never encountered another person in that area. Counting the days till winter! 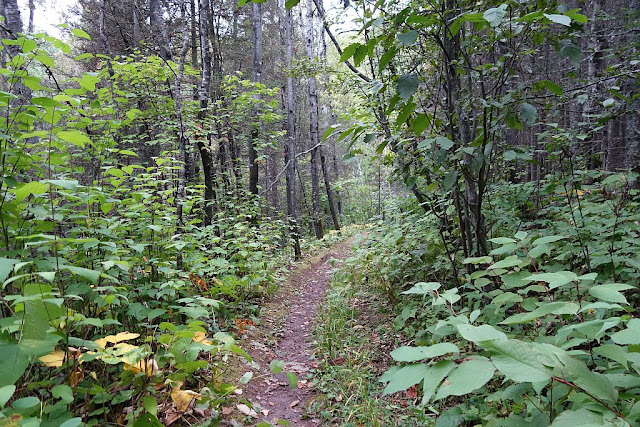 Son snapped this pic as I started down the trail. We were wearing our hip boots with our hunting boots strapped to our packs as the crossing is upper thigh deep in some places. 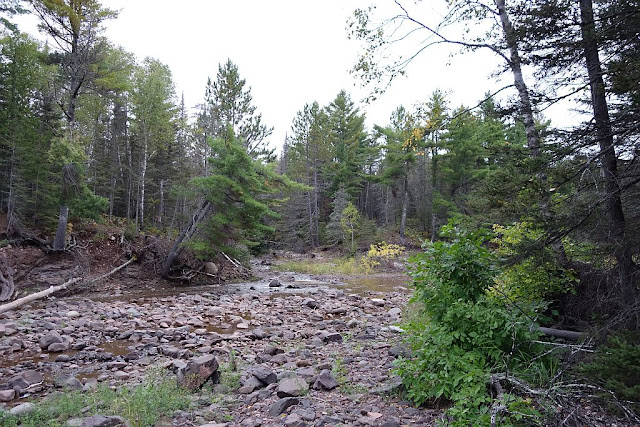 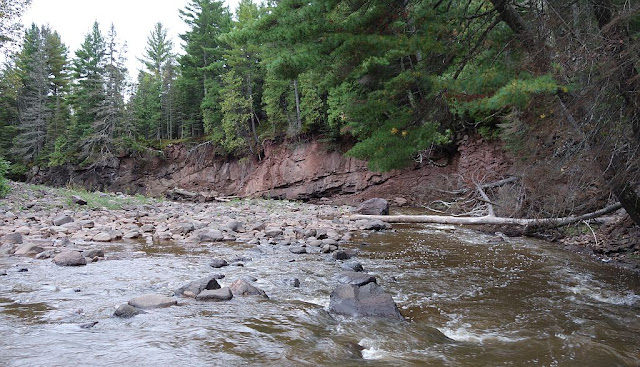 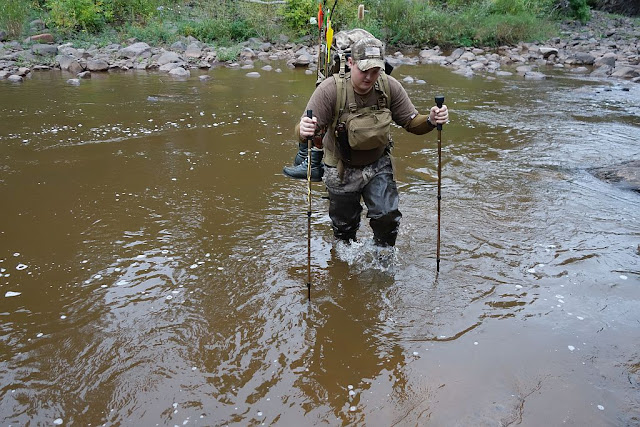 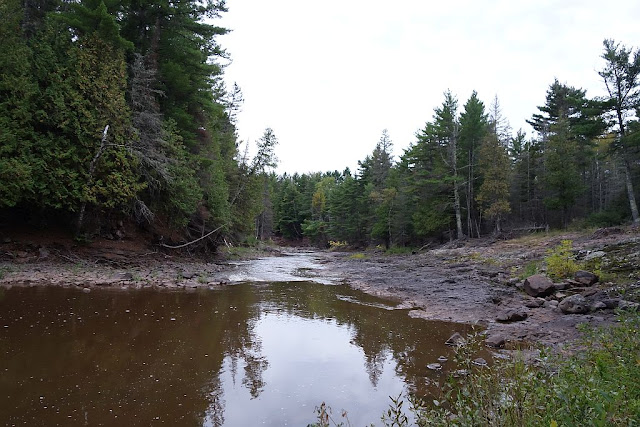 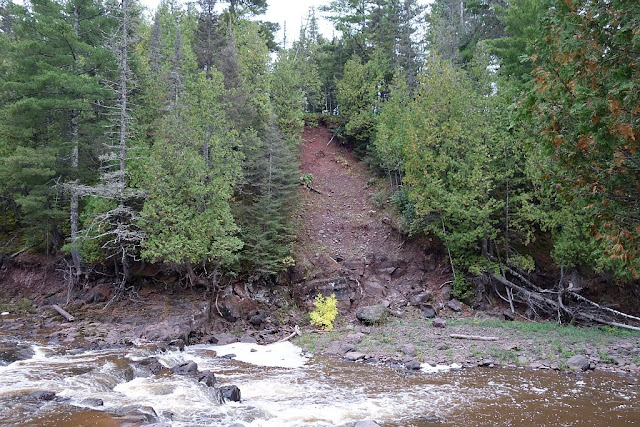 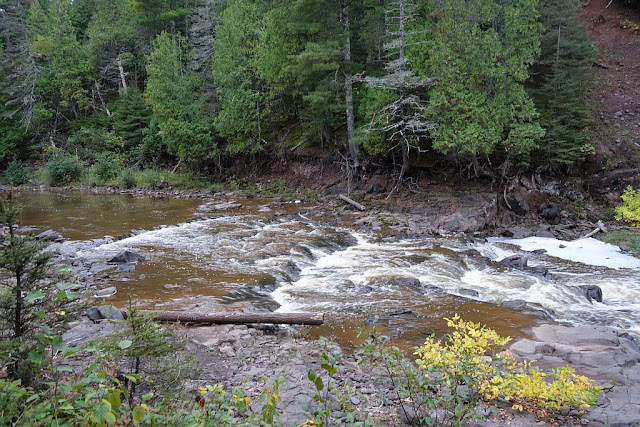 If the area looks familiar it is because it is the same one we spent three days on last year, much later in the season. Back then we packed in our big tent and wood stove as it was cold enough to need it. This early in the year we had lows only in the high 40s with highs in the 50s.

I loaned my Kifaru 7k Highcamp on a duplex frame to the son for the trip. He's between packs and trying out much of his dad's collection, looking for something to trip his trigger. I think all he has accomplished is to have contracted my 'needanotherpack syndrome',  a condition for which there is apparently no known cure. 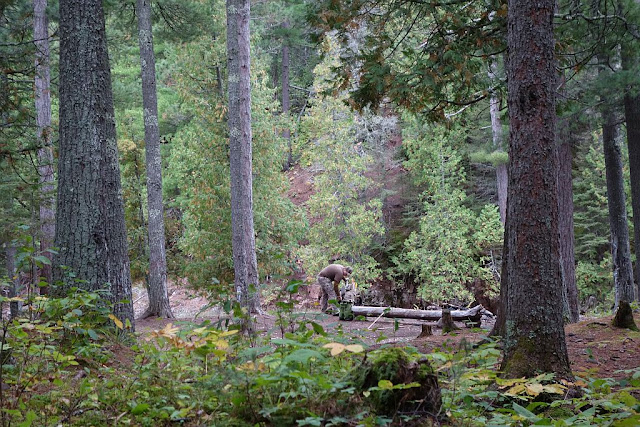 My pack was a Kifaru Late Season with some large pockets on either side, a medium in the center, a medium on the top and a dock and lock on the bottom. This was a trial run for this pack and set up. The pack is listed as 3400ci, with the pockets and the dock and lock I'm guessing it's around 5200ci. 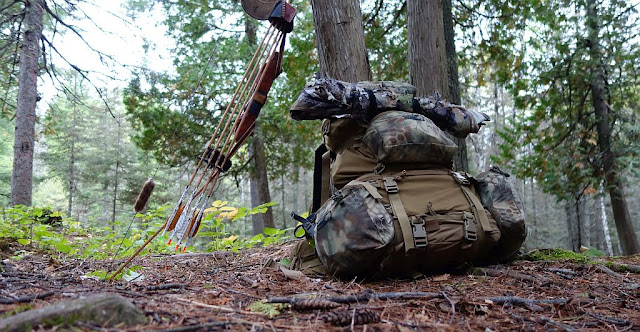 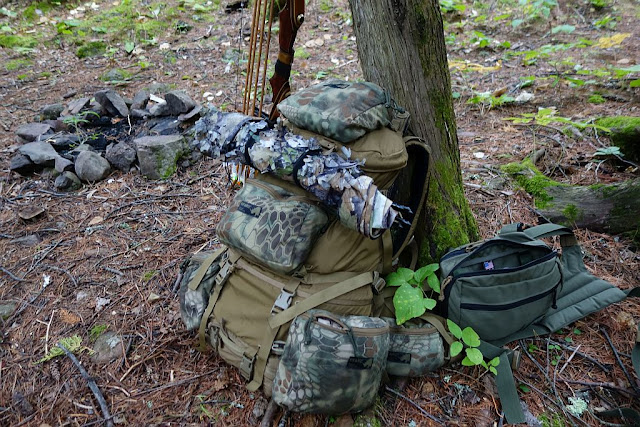 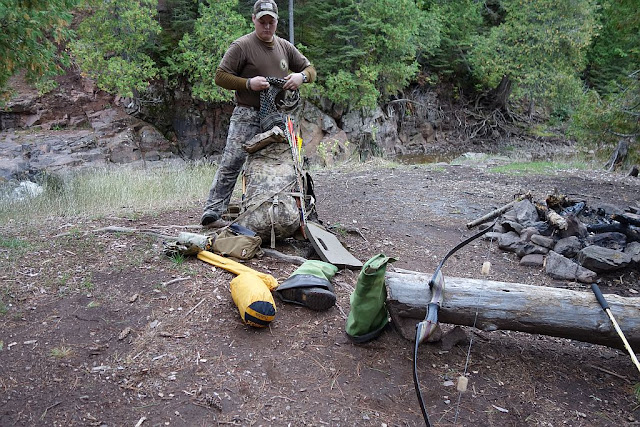 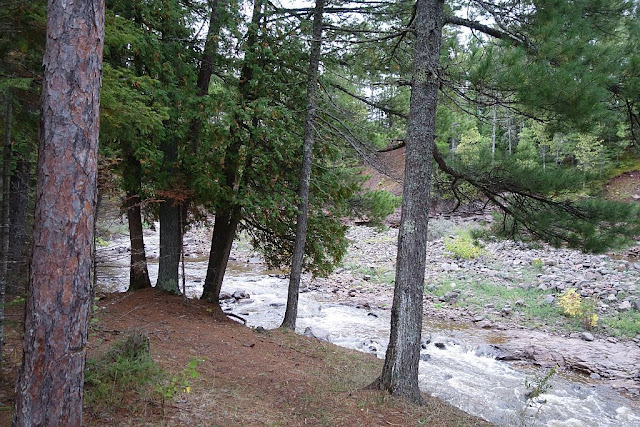 He's taken to using a page out of my playbook. A GSX tent under a BCUSA 10x10 tarp. A configuration I used several times and found super functional and comfortable. Plenty of ventilation, excellent weather and bug protection, gear storage area. It's a economical yet very functional set up. 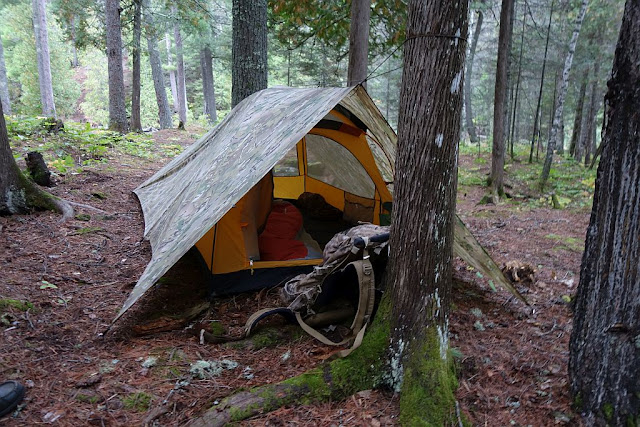 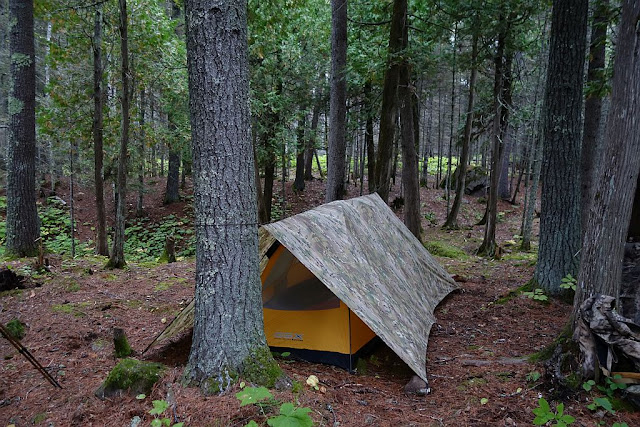 I was using what I now believe to be one of the top five pieces of gear that I have ever owned. A Kifaru Megatarp which has quite simply become the end all be all 'Taj Ma Hut' for yours truly. Winter, summer, Alaska to the high desert, river bottom to mountain side this has served me so well that I think it's probably as close to perfect for me as I'll ever find. While I have the annex and I also use the Bear Paw Net Tent 1.5 I used neither on this trip and simply left the front end open. 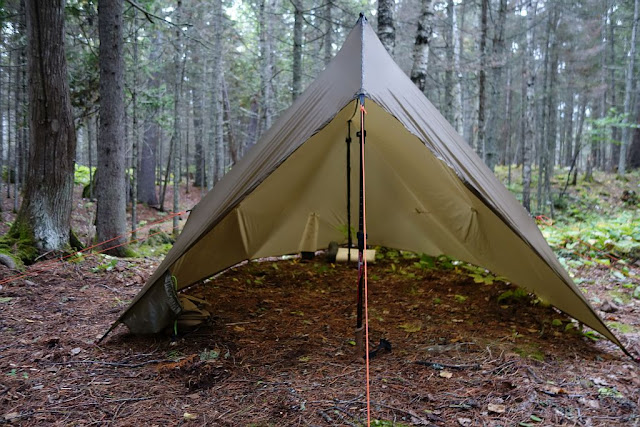 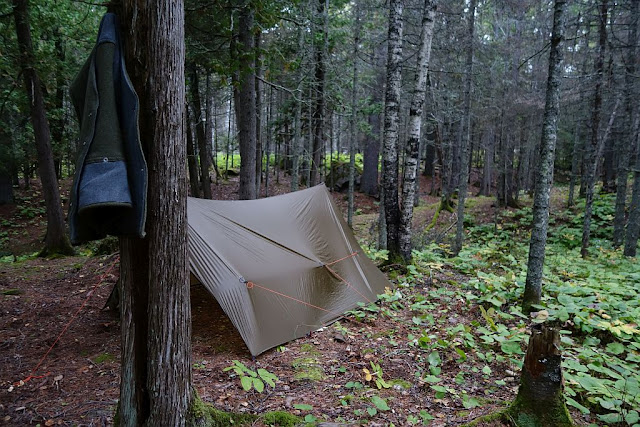 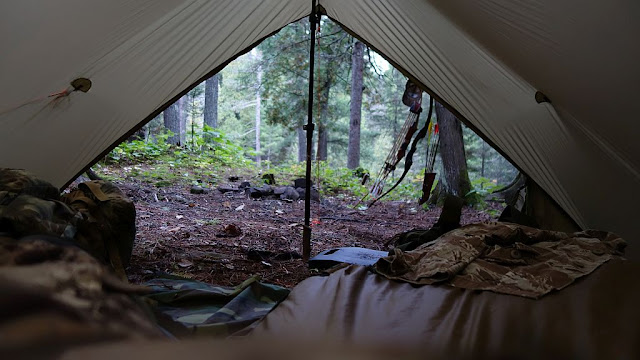 Once we had camp set my son set about getting a bag of water and I fiddled around and got my stove and food ready for dinner. Simple affair, Mountain Hause as usual. This MSR gravity fed water filter is now on its fifth year of use and still going strong! 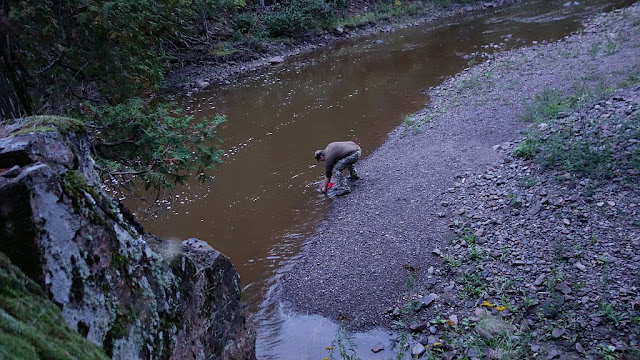 We crashed not long after dark, excited to chase deer in the morning I well if sporadically. When I woke at 0500 I set about coffee and breakfast in the red light of my headlamp. While I carry a larger headlamp (Petzl Tikka RXP reactive which won my headlamp war last winter) I've been carrying a Petzl e+Lite within my sleep kit. It's perfect for inside the shelter use, has multiple outputs including red lamp and weighs pretty much nothing. I consider it a mandatory piece of kit. 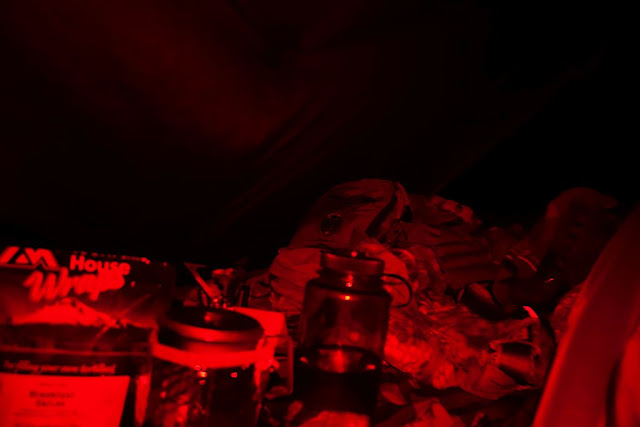 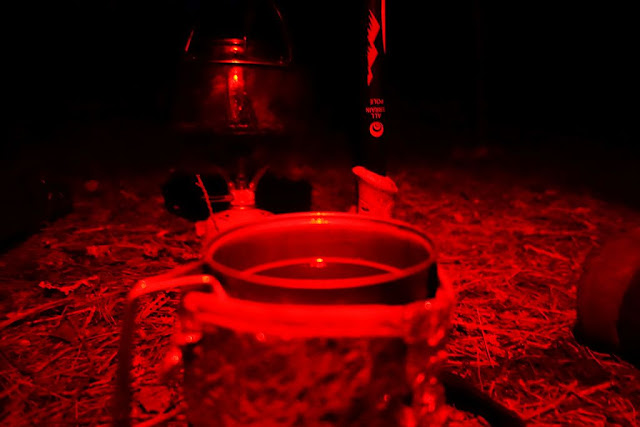 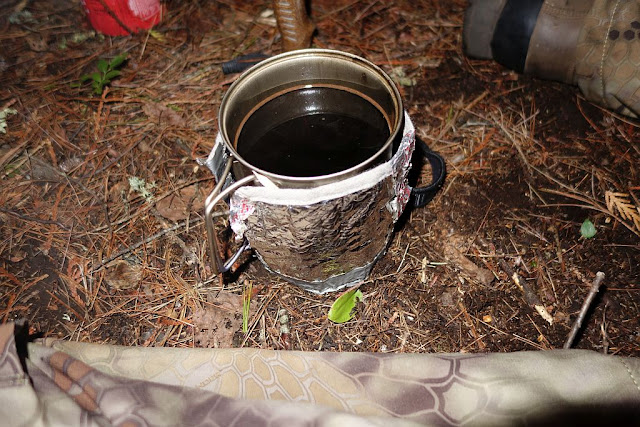 With Breakfast done we wished each other good luck and headed out in separate directions. I no longer worry about him being off on his own. He's quite competent and has shown the ability to make good decisions in the wild, a competent if young woodsman who probably enjoys being on his own these days more than me being over his shoulder. 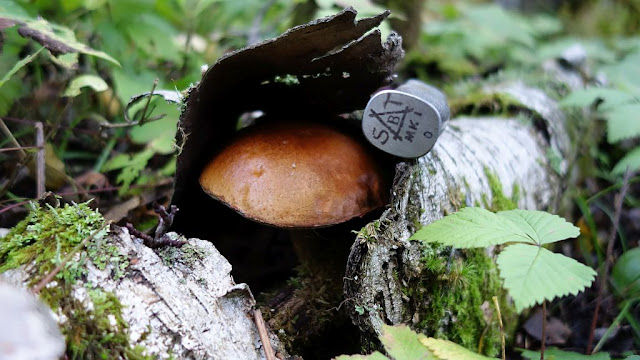 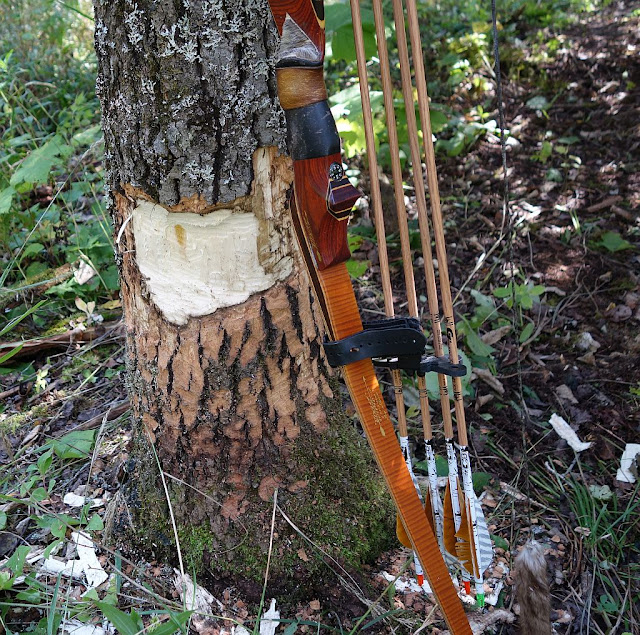 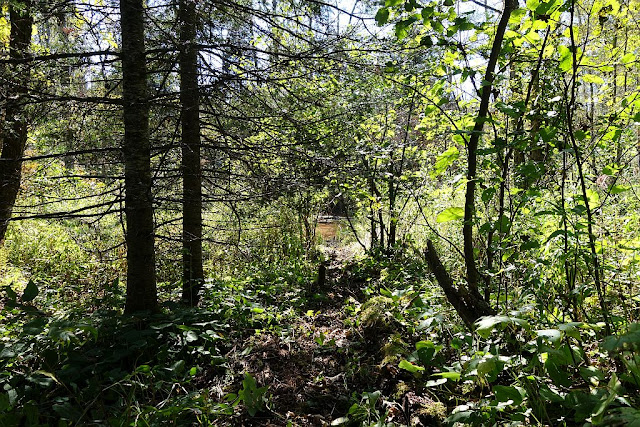 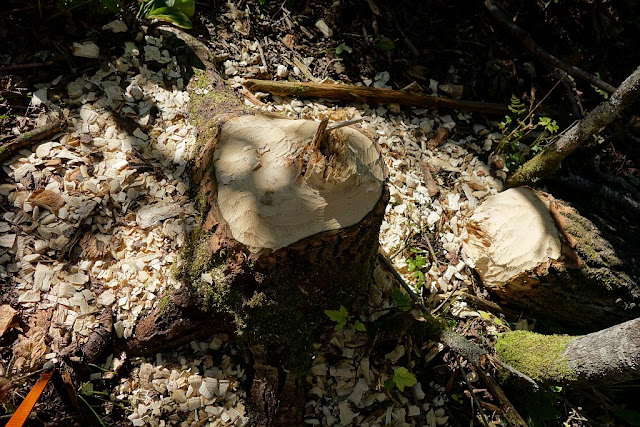 I enjoyed my time in the woods, more loafing than any serious hunting. Watching wildlife do their thing and learning what I could. We spend the day doing our own thing, while deer were spied no arrow left the string with lethal intent. It was enough to walk the game trails, ghost the timber, spy the beaver and wonder at the majesty of the wild.

Our hike out was uneventful and without much talking, neither had the desire to shatter the silence with what would likely have been meaningless words. It was enough to share the space so to speak.

Sometimes there is no need to talk, this was one of them.
Posted by Cro at 22:04