Our weather broke, we've been single digits or less and suddenly we have a heat wave! It got clear up 28 degrees Fahrenheit today. Warm enough to get some of the little ones outside.

I've got four of 'em, two boys and two girls with my third son due in March. We are all active outdoors year round but the temps of late have been just a bit too much for the youngest two. They've been itching for an outing and I was ramped up to get out with the new pack as well.

The snow was deep but it's been deep for a while now, I broke trail with no snowshoes so they could follow me with relative ease. One of the better things about Dad, or so my daughter told me as we trekked out, she apparently approves of my path breaking ability. We went about a half a mile behind the house and close to the Superior National Forest boundary. Trudging through the snow was taxing but I wasn't uncomfortable, the Timber Cruiser rode well and I had no binding or discomfort at all. Having everything contained in the pack instead of just strapped to it makes a huge difference.

Depth of the snow... 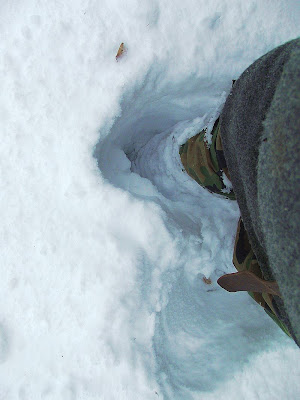 I wore a wool base layer, standard BDUs, a wool longhunter shirt, mukluks and gaiters. Snow hit waist deep on several occasions. Had this been an over night stint I certainly would have worn wool all the way around, since it was a day trip and the temps were pushing 30 the cotton BDUs were fine.

This is where we decided to build our shelter, it doesn't look like much but it turned out great...

Youngest son and I set to digging out. I know several folks commented on the amount of work involved in digging out but it really is the best way to do it in my opinion. Shed a few layers because you are going to heat up. It's great cardio! No matter how cold it gets, ground temps don't really get below 28ish degrees, when the air temperatures are well below that the ground is like a bit of a heater. Not to mention the fact that snow walls work just fine. If you do sweat heavily you need to swap into dry clothes when the activity is over. 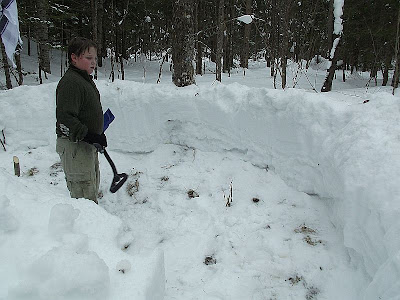 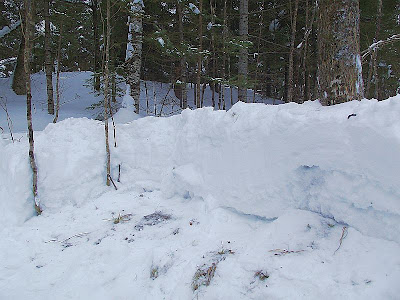 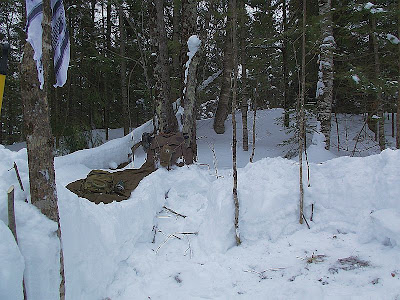 First part of the shelter up, this one is going to have a reflective wall as well, but it will be catercorner from the fire in order to bounce the heat back through the whole shelter. 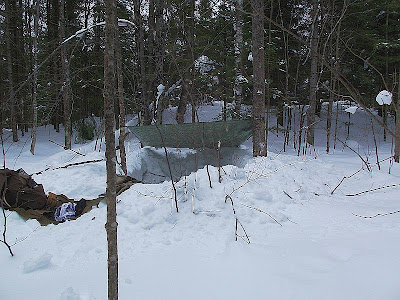 Youngest daughter starts in with the pine bough lounging area, my son was gathering them for her while I started in on gathering wood for the fire. 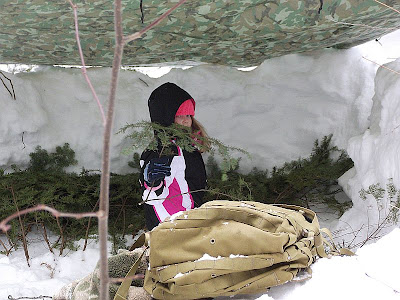 She's right proud of her work. 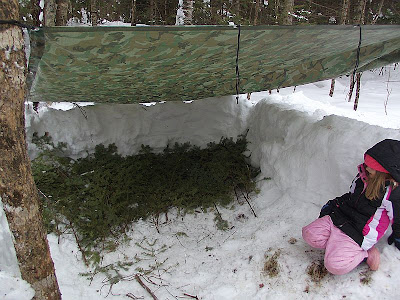 Son is finishing up the reflective wall. 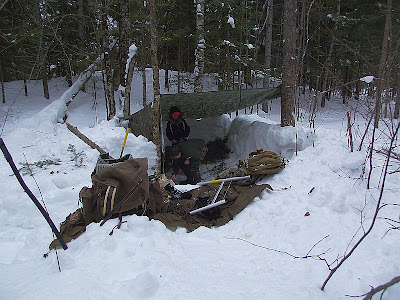 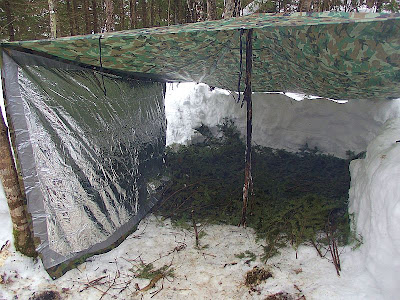 Dad finally got the fire and lunch going for the hungry Bushcrafters in training. 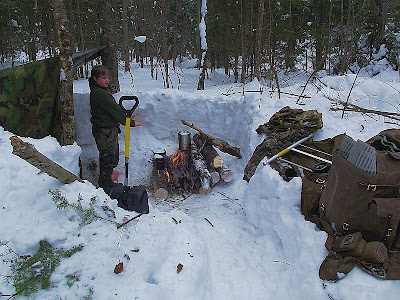 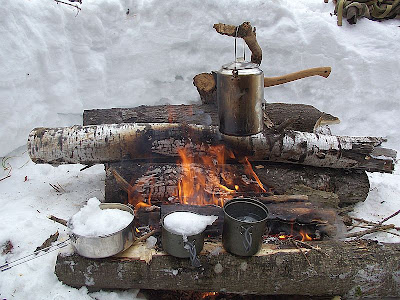 Some views from inside the shelter. 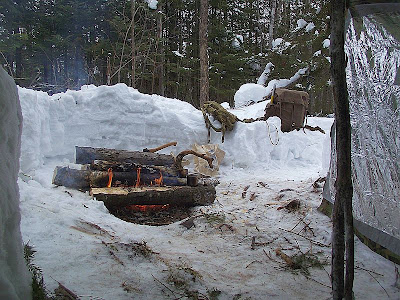 The dogs have joined us. 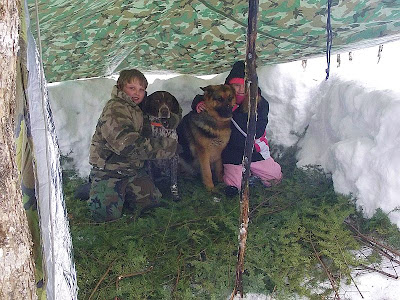 The following images were taken at distance, the shelter nearly disappears.. 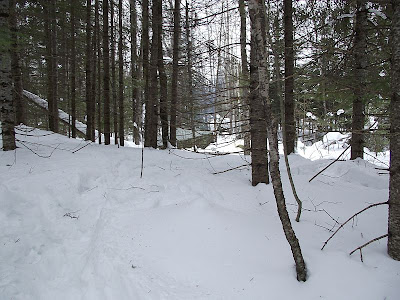 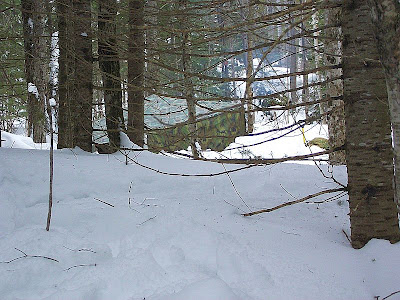 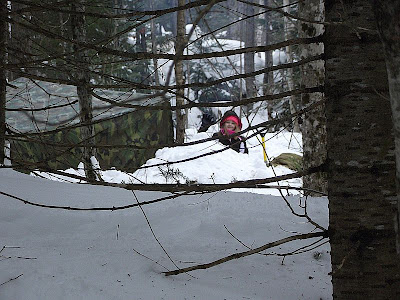 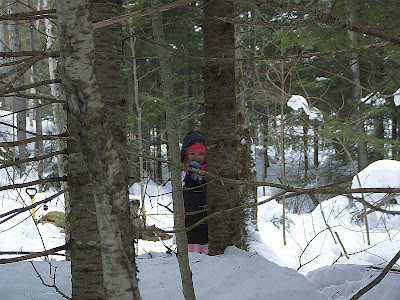 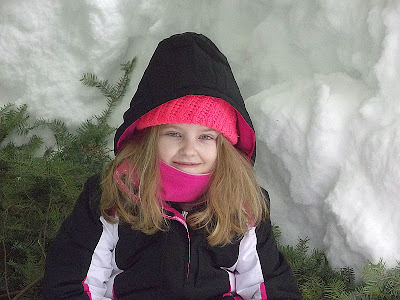 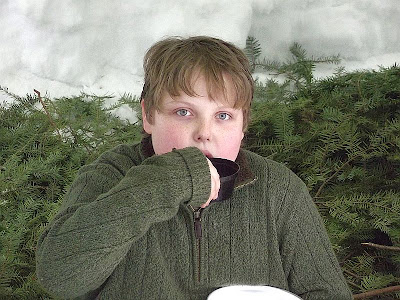 My daughter is a Kung-Fu champion. 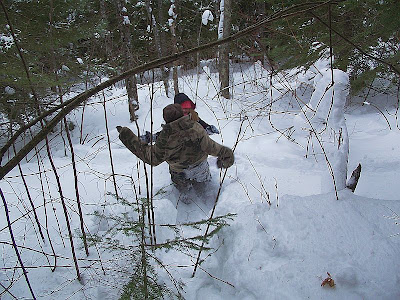 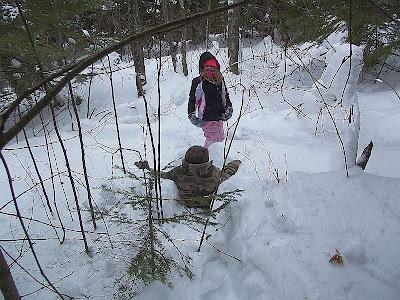 Great time was had, couldn't ask for better kids.
The pack did great, I did not have any problems with it. Obviously a mile total isn't much, but in that kind of snow it was something.
Posted by Cro at 16:29