A Tale of High Adventure, sort of...

I have a story about what I paddle, if you've time to hear it.

It was over twenty years ago, January, and it was cold. We were living in Virginia then, on some property that ran along the Little River about 13 or 14 miles from the Little River Dam. We connected with several hundred other acres and it wasn't uncommon for me to be bummin' about with my longbow in hand.

Light snow, maybe two inches on the ground, very windy, I was making my way along the river's edge. As cold as it was the ground, or the muck rather wasn't frozen hard and I kept sinking near to my knees in the goop. The dam was about eight miles downstream, they had been letting the river run for about three days, the water level was low and the area I was walking would normally be about two or three feet under water. Trying to pick out solid places to place my next step I saw a flicker, a glint of something.

The sun was at about one o'clock. Strange place for metal I distinctly remember thinking as I bent over to see what it was. I pushed some snowy muck aside and the run of metal slightly curved. What the hell? I kept pushing and moving the junk until the shape of a large canoe could be seen in the mud. Aluminum gunwales, wide, maybe 3' wide, must have been 17 to 19 feet long. I was struck speechless, here I was at least seven maybe eight miles from the nearest boat launch and this section of river had near cliff faces 80 to 100 feet tall, usually underwater at this point as well. How it got there I didn't know, to be completely filled with mud and cattails four feet high growing throughout I figured it must have been there for quite a while.

Curiosity had me though and I had to know what kind of shape it was in. I wasn't prepared to do the excavation at the time so I hiked the six miles back to the house, wondering the whole way.

The next day I hiked back, packing a shovel with me. I started in as soon as I got there, I think I dug that thick heavy mud for about five hours, I kept checking the thing as I dug, saw no obvious holes, it was clearly an aluminum canoe, looked like an old Grumman. Finally after several hours I was able to lift it and drag it. I was done up though, even though I was in great shape and held the enthusiasm of youth that canoe and that river were flat kicking my butt.

With what I had left I pulled it to the rocks at the base of the cliff, letting it drift in some water I didn't see any rushing in. Pulling it up on shore and using some 550 I had in my pack I tied it to a tree and headed home. Back then I was working grave yard and my shift would be starting later that night.

About a week passed before I had a chance to hike back to the lost canoe as I was calling it. I'd hiked it enough that I knew it would take me about two hours to get there. Based on what I knew of that river and a topo the canoe was about eight miles from the dam and the boat launch there. I strapped a paddle to my pack, told my wife to meet me at the dam at 2pm that afternoon. She rolled her eyes but said she would.

It was 26 degrees that morning and the skies were not looking kind. The wind was rolling out of the North West and was wet and crushing. I set a brisk pace, excited to see just how this was gonna turn out.

I made it to the canoe ahead of schedule, about the same time I arrived the heavy snow flakes begin to drop. I tipped that old canoe, catching water in it and sloshing it about then dumped it.

There were no seats, there was some old fabric long rotted away where the seats used to be. Nothing but wispy strips of it left, the bars where the seats used to be were somewhat close together. Pulling a spare jacket out of my pack I fashioned a bit of a seat. Lashed my pack to the front seat, pushed off and started paddling downstream. Eight long miles in a January snowstorm in a canoe that hadn't turned water in who knew how many years. Did I mention I was young?

I was less than half a mile from where I launched when the snow started going sideways, the wind was howling and I was having a heck of a time tracking a decent course. I noticed water in the bottom, not a huge amount but definitely there, and rising.

I doubled down on the paddle and really started pushing. Despite my predicament I was grinning from ear to ear. Moments like that tend to get me bent, wind howling, dropping temperatures, near frozen water, visibility disappearing, no sane man would do this I said to myself, smiling even bigger. Nothing like getting near the edge to make your heart pump.

Water was getting deeper, it was getting close to the tops of my boots, I had been pushing the paddle so hard I wasn't paying attention. That's when I saw them. The fore and aft of this canoe is a hollow enclosed compartment but there is a section about two inches wide that is not closed. The interior of these compartments are Styrofoam. Little balls of it were all in the water and the mice. Yes, mice, my guess it they had nested in those compartments during the week I had left the boat on the bank. Three, four, five, maybe eight as I lost count. They were swimming around the canoe and around my legs! I went for the bank at speed, using the paddle to flip mice out when they got close to me.

I was wet to the knees by the time I made it to the bank. Sloshing out I yanked her hard onto the rocks and rolled it back and forth until I was able to flip it. Water and mice and styrofoam came pouring out and I had to make a decision.

I was looking the canoe over trying to figure out where the water was coming in from, I found it in the seam of the bottom. There were some missing rivets near the Stearn at the seam and the pieces of aluminum were pulled slightly apart. I made my decision. I swapped ends, putting the stern forward and paddled from what would normally have been the front seat, my weight keeping the front up and slightly out of the water and paddled like my life depended on it, as it actually did.

Two hours later and two more shore stops to flip the canoe I made it to the landing at about four pm. Dark was coming on and I was beginning to freeze. My legs had lost feeling, my hands my back, motor control was slipping and I was not grinning.

The sight of my wife at that landing sitting in the truck was like stepping up to a roaring fire. I didn't care how pissed she'd be because I was hours late, for once I was looking forward to hearing it!***

That was 20-something years ago, me and that canoe have done things and gone places most folks in kayaks won't go. Class III didn't make me blink, wide open water, not a problem. It's been painted, bent, wrecked, dropped, fallen out of a truck, had a tree dropped on it, froze solid and sun baked. In some ways that old canoe reminds me of me, beat to hell but somehow still tripping.

I've got 'er out now and I'm stripping the paint from the last time the kids decided to paint it. There's not a single inch of surface that isn't dented or dinged now. I've re riveted the seams several times, built new seats every three years. I've paddled all my kids across river and lake in that canoe before they were a year old. Brought deer out of the back woods, crossed the Boundary Waters and traveled down the Cloquet River every spring in it. I've moved her across the country, paddled waters in eleven different states, slept under it in a ravaging down pour and once we even used it as a sled down a long hill covered in good powder.

I know there are lighter canoes, better performing canoes, better looking canoes out there, and some day I'll probably buy one of them, maybe when I can't portage this 90 pound monster anymore. This boat has stories though and you just can't buy that.

So, while she might not look like much, she's mine and man oh man have we got memories! 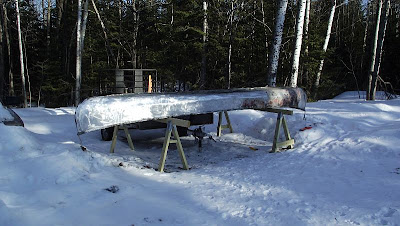 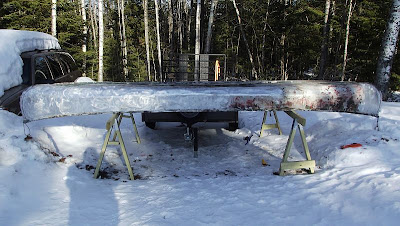