The Modern Aversion to Winter...

It's detrimental to healthy living, this much I do know, the aversion and dislike of the cold months I mean.

It's not hard to find a plethora of modern science papers and opinions expounding on how winter brings on depression. They cover everything from reduced light causing depression to actual hormonal changes because of winter. I'm sure with all the degrees and PHDs expounding on the topic it would be rather difficult to disagree with the opinions and theories. I intend to do just that though. I won't be writing a paper, I'm not a doctor, don't play one on the television or on the internet, but how about some common sense? It isn't 'Winter' that causes a darn thing in this equation, it's man and his continual attempt to create life of the ultimate comfort in his opinion, regardless of season. To all things there is a season right? So why does man toil at removing them from his life? It's this toil that leads to the problems, not Winter itself.

Because Calvin Rutstrum said it much better than I can I'll quote him here:

"Man has largely been fighting the natural elements instead of adjusting to them since first he wandered away from nature's indispensable benefits. He has endeavored with tragic failure to substitute an increasingly artificial and consequently not a particularly happy life for his natural heritage."

"And since the urban population lives in homes that are essentially machines, their travel is primarily in machines. A snowstorm- natural and magnificent as it can be- tends to foul up the mechanized order of life, until season after season, urban life maladjusted to winter, sags into a kind of chronic discontent."

Rather succinct in explanation when delivered in such a fashion. Man is doing it to himself, winter has nothing to do with depression or how we feel, rather the feeble attempts by man to live beyond winter's touch causes the negative feelings, removing the natural world from a natural life is disharmony by definition. Rather than adapting to it, the effort instead is spent trying to avoid winter. How much healthier a man, steadily living through winter, adapting by way of correct clothing, continual exercise via the out of doors, rejoicing in the the beauty and austerity of the fourth season? Instead of avoidance, living in accordance provides for a much healthier aspect, it's a matter of perspective and engagement.

Our health and mental acuity are not static, they ebb and flow dependent upon the challenges faced. A body at rest that rarely expends energy, will have little energy to expend. A mind rarely challenged will not readily adapt and process through a challenging line of thought. As Rustram said, Use it or Lose it. Many people willingly shut themselves indoors come winter, poor air and little physical activity leads to illnesses and mental malaise. "Don't go out there, you'll catch your death of cold!" How many times have you heard that one? More of the ever encroaching army of Nannies hell bent on removing all of "their" perceived dangers within our society. Never mind the fact that the people who spend inordinately large amounts of time outside in winter fall ill to colds and the flu at a pace dramatically less than those who spend it indoors. Much like everything else the "Nannies" don't like, be it guns or knives, facts be damned in their crusade to "baby-proof" our society. As a friend of mine says, "Mind your business and quit ruining my life!"

Life is what you make it, this applies to the fourth season as much as it does to the other three. To think we can shut ourselves away through a season, artificially control our climate and pretend winter does not exist or to try to ignore it is folly and as folly usually does, it brings discontent to our winter. Better to live within it, embrace it, find its beauty and fuel the mind and the body with it. Life is not all sunshine and flowers, trying to make it so will end in nothing but disillusioned depression. Stop trying to change the world, learn to live in the one we have. 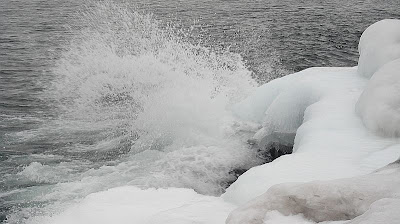