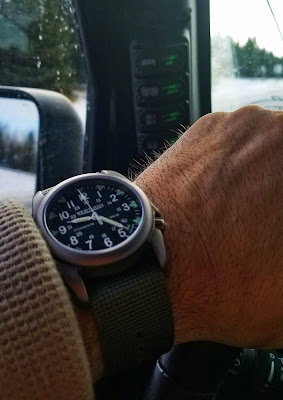 I don't really know why I've always been fascinated by timepieces, classic timepieces more so than modern. What I do know is I've had a watch on my wrist since I was a young man, I believe I was twelve or thirteen when I got my first one and I've had one ever since.

In my final years of corporate life the bane of the smartphone rose to prominence. I can honestly say I've never seen anything more damaging to productive and wise use of time than the smartphone. I witnessed the disappearance of many a wrist watch, or saw them replaced by extensions of smartphones, a la the apple watch. True, there were some who still wore a timepiece and I never failed to notice that. I also studiously observed those who checked time on their watch, usually a glance that could be measured in milliseconds versus those who checked their phones. What starts as a look at the time turns into multi-minute affairs if not longer, because invariably there were several push notifications, text messages, emails that drove the person to check out of the meeting and essentially disengage from a productive state within the group. I digress.

The history of wristwatches is fascinating, when they first became readily available they were for women. The venerable pocket watch was the male timepiece of choice. The first record most often pointed to was in 1868, and until the first World War they remained on the wrist of the fairer sex. War would change that.

In the book 'Now it can be Told' by Philip Gibbs, he says;

"The watch hands [on the officers’ wrists] pointed to the second which had been given for the assault to begin, and instantly, to the tick, the guns lifted and made a curtain of fire round the Chateau of Hooge, beyond the Menin road, six hundred yards away.

“Time!”
The company officers blew their whistles, and there was a sudden clatter from trench-spades slung to rifle-barrels, and from men girdled with hand-grenades, as the advancing companies deployed and made their first rush forward."

Post war, production of wristwatches for men exploded and the world never really looked at alternatives again, until the modern smartphone became commonplace.

However, there are many who never took their watch off. Now seem that watches are making a come back. or so some have written

Fast Company; Millennials Think it's Time to Bring Back the Analog Watch.

Wired ; I BOUGHT A DUMB WATCH TO RESCUE ME FROM MY PHONE

The analog field watch, the kind of watch most of our father's fathers and then they themselves wore. Found upon the wrist of travelers, adventurers, hunters and fishermen as well as mill workers and foundrymen police officers and of course soldiers, aviators, squids and lounge lizards, the world over. (No offense to my fellow Navy Men and Marines.)

I've had a number of them over the years but I won't bore you with all of them while leading up to what I think might be the most affordable, durable, functional version I've owned. In fact, I've liked this watch so much I have several of them, but none of them have worn out or stopped working. So why so many of them? Because of minor changes since they were released that had features the prior version did not have. I've owned four of the Bertucci designs, all of them are still kicking.

The final iteration that has been on my wrist for a while now, the Bertucci A4T Illuminated. It was the first of the line that had all of the features I wanted, many of the others before it had some or most but not the complete feature set I was looking for.

While there are many features, the primary for me is the watch is a single piece of titanium, no pins and the fact that the crown is at the 4 o'clock position. That feature alone is huge to me. For a number of years I had a permanent callus on the back of my hand where the crown on a submariner dug incessantly into the tissue to the front of it. The 4 o'clock positioning of the crown on the A4T eliminates this issue. The watch is incredibly lightweight, and while it is a 44mm  case it is quite slim and doesn't catch on sleeves and the like. I like Marathon watches but they're bricks on the wrist and incredible thick.

The single piece of machined titanium. It's a clever design that does away with the pin method of attaching the watch to a band. You run the single continuous band through a bar, under the watch and then through the next bar. Done. Virtually indestructible.

The A4T Illuminated has continuous illuminating micro tube hands & markers. The tritium microtubes are brite and unfading. The face is classically styled after many WWII Field Watches, the crystal is sapphire and virtually unscratchable.

The only feature I wish was available is a solar powered version. Which brings me to why I've abandoned automatics. While they are great pieces, all automatics have to be serviced, some of them within four or five years, the longest I've ever seen advertised is ten years. And while that's a long time, even five years, the cost of servicing automatics is often atrocious. I've been quoted and paid from $250 to $1200 for a service that was usually required every five years. So, as much as I like automatics, I no longer own any. Solar is interesting and I've had a few, and is the only missing feature from the Bertucci A4T in my opinion.

There are a slew of bands that will work with this watch and the manufacturer offers three materials. Nylon nato zulu types, Horween leather and Tridura which is a polyurethane infused webbing. The band is 26mm in width.

All of the Bertucci field watches are available in a polymer resin, stainless steel, and titanium. The polys are the least expensive and offer the same one piece no pin design and the 4 o'clock crown. These are a great option for younger folk, my seven year old son has the A-2R Bertucci DX3 as does my sixteen year old daughter. It's a very inexpensive ($59.99 @ the time of this writing) very durable watch!

If you're looking for a classically styled field watch with a modern execution that is unencumbered by 'smart stuff' you need look no further than Bertucci. If the A4T isn't in your price range you can get essentially the same watch as the A4T Illuminated for quite a bit less if you're willing to forgo the Tritium, and or the sapphire crystal. The A2 for example is about 1/3rd the cost of the 4T. In fact the entire range of Bertucci watches can be had quite economically depending upon your choice of build and features.

See the entire line of Bertucci Watches. The ordering process at Bertucci is either over the phone or via email, in this way you can pic the exact watch, features and band type that you want. For those who are not interested in custom configurations, you can find nearly the entire line at Amazon.
Posted by Cro at 23:21