As part of the 'Planning an Adventure Part II' I spent last week and through the weekend on a dry run of the wolf hunt to determine what will work and what won't.


I'd planned on 2800 calories a day and picked the MH based on a minimum of 100 calories per ounce and found there are a couple that run much higher than that. The Breakfast skillet for example, meant to be used with a wrap, weighs 4.73 ounces but runs about 800 calories per bag. Nearly 200 calories an ounce and it taste pretty good too!

Clothing was merino wool base layers, Kryptek Cadog pans, Kryptek Aquillo hyper dry down puffy and a wind break jacket, for additional security I took my wool pullover as well. I didn't pack any extra clothing other than my sleeping base which is just another set of merino.

Sleep system was a 25 degree down bag from Kelty, my HPG Mountain Serape as an over bag, and I took a Ti Goat bivy. Thermarest ridge rest pad.

Primary pack was Kuiu Icon 7200 and I packed a couple day packs to try out.

Because I knew I'd be crossing a mostly frozen river I took the LaCrosse Aerohead 18" boots instead of my normal pac boots.

Weather indicated snow every day, temps topping out in the low 20s and lows in the single digits. 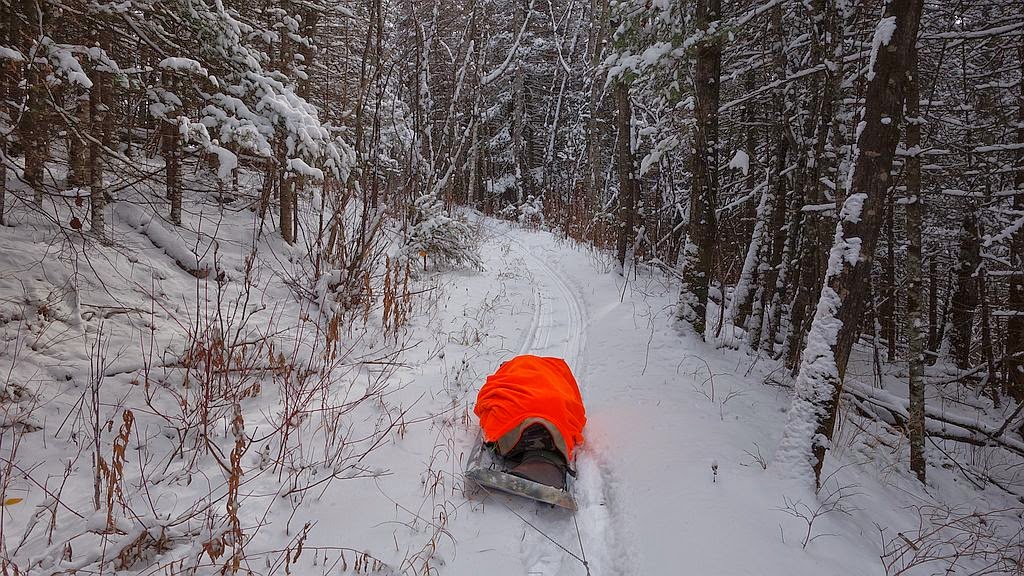 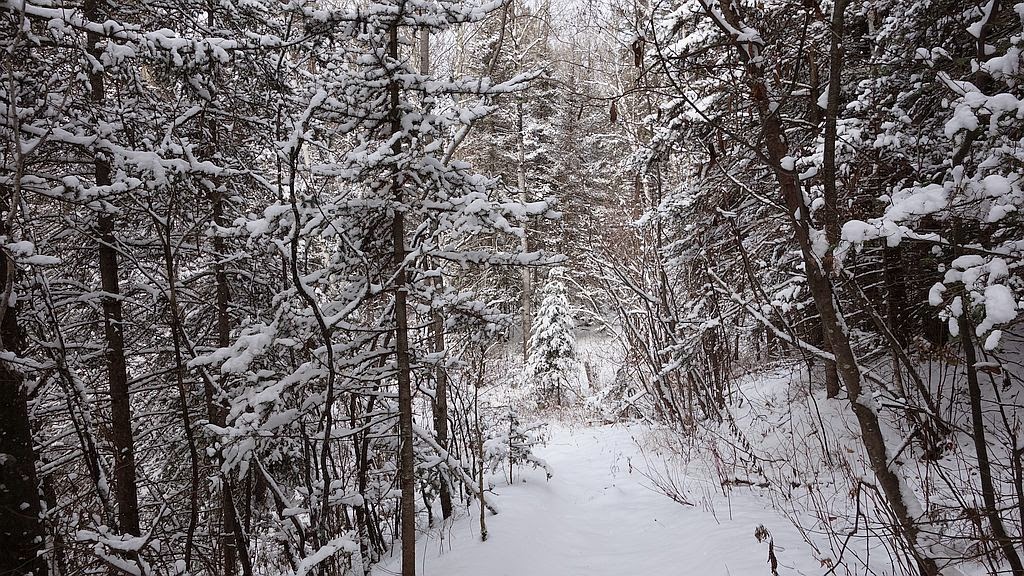 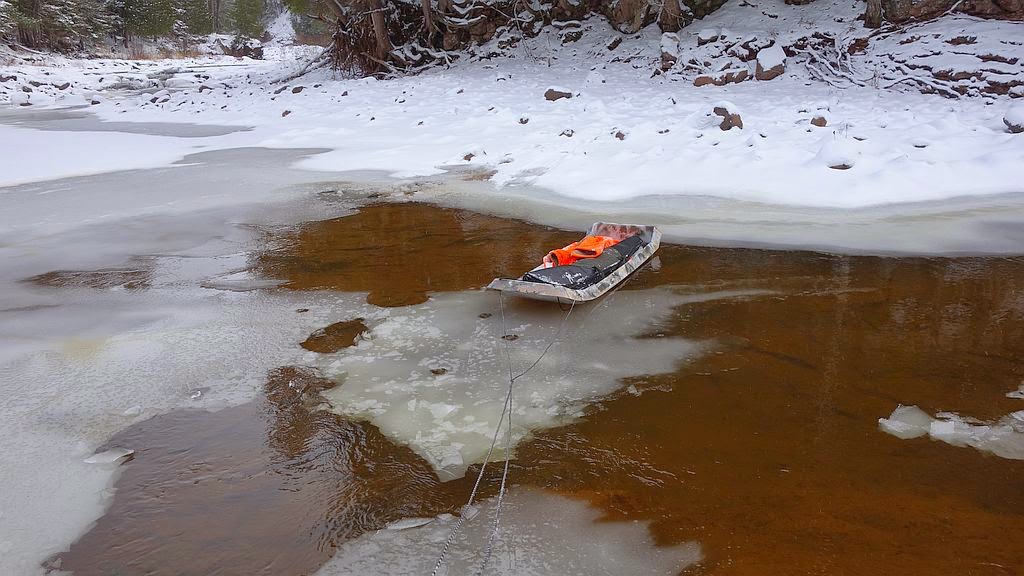 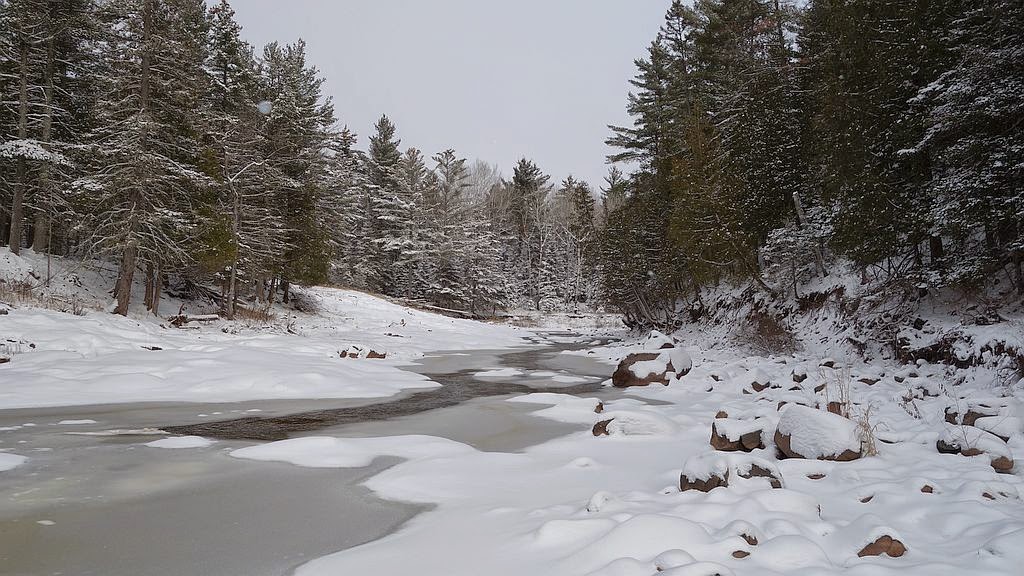 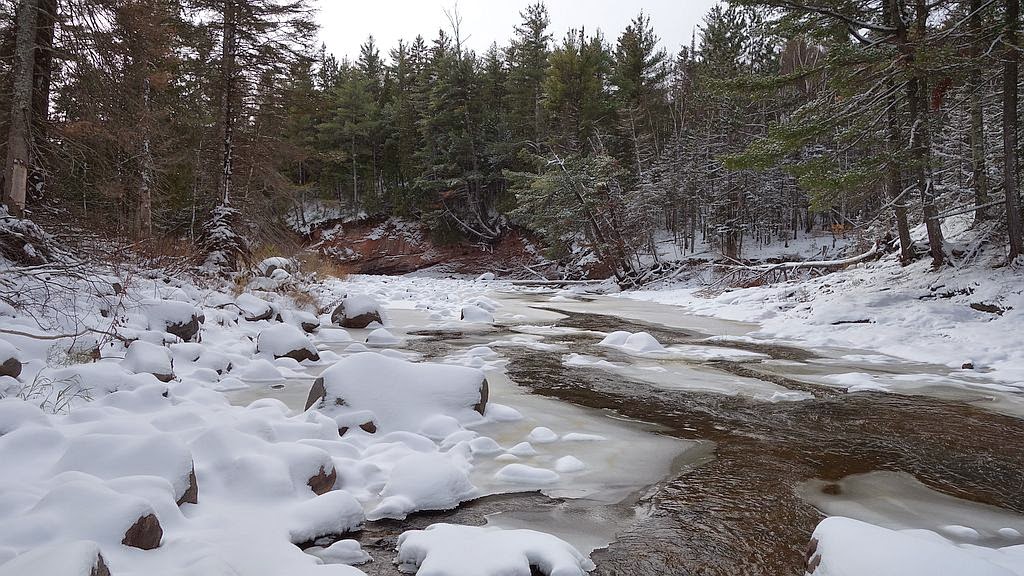 Once across the river the hike back to the camp site is about a mile and a half, that walk was uneventful. 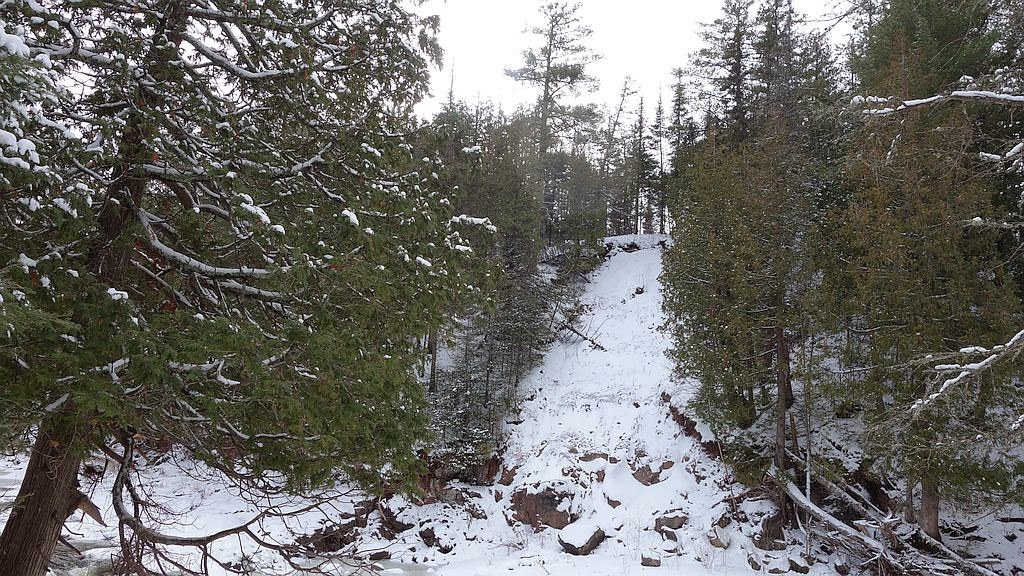 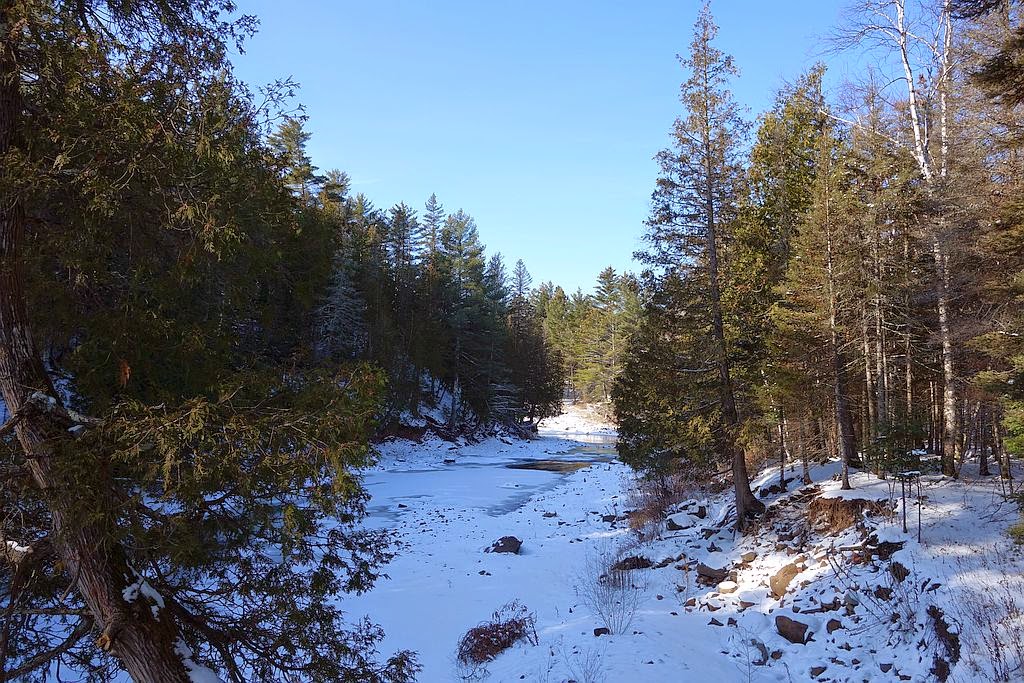 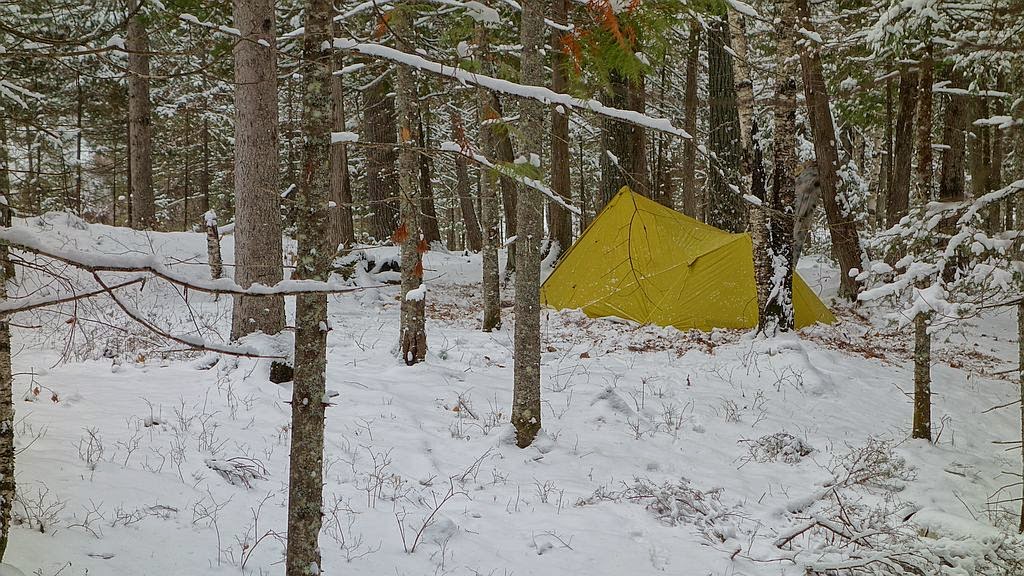 After getting camp set up I headed out for an afternoon walk up the river with the intent of climbing the ridge line a mile up and circling back west and south then back into the valley returning to camp. 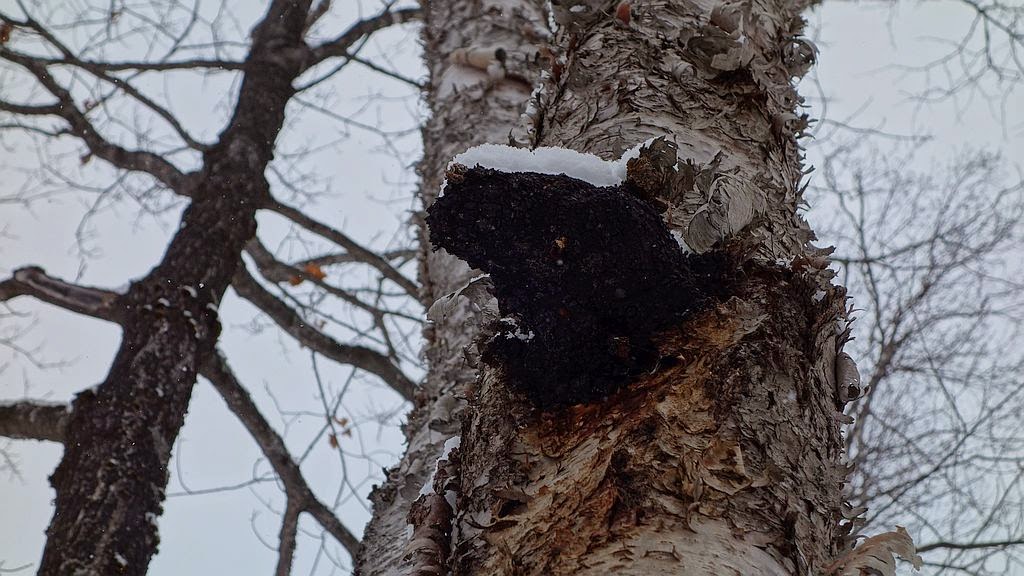 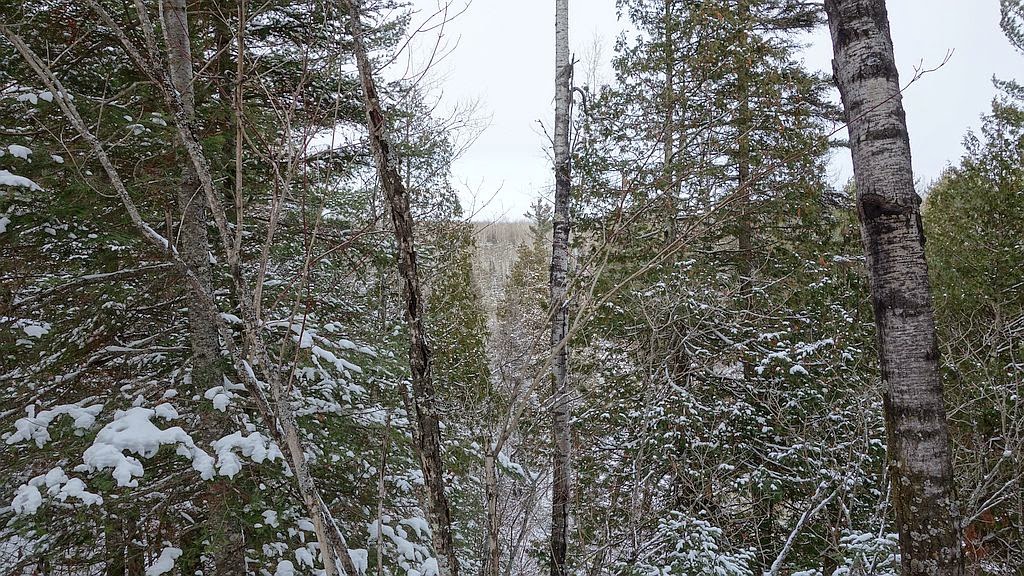 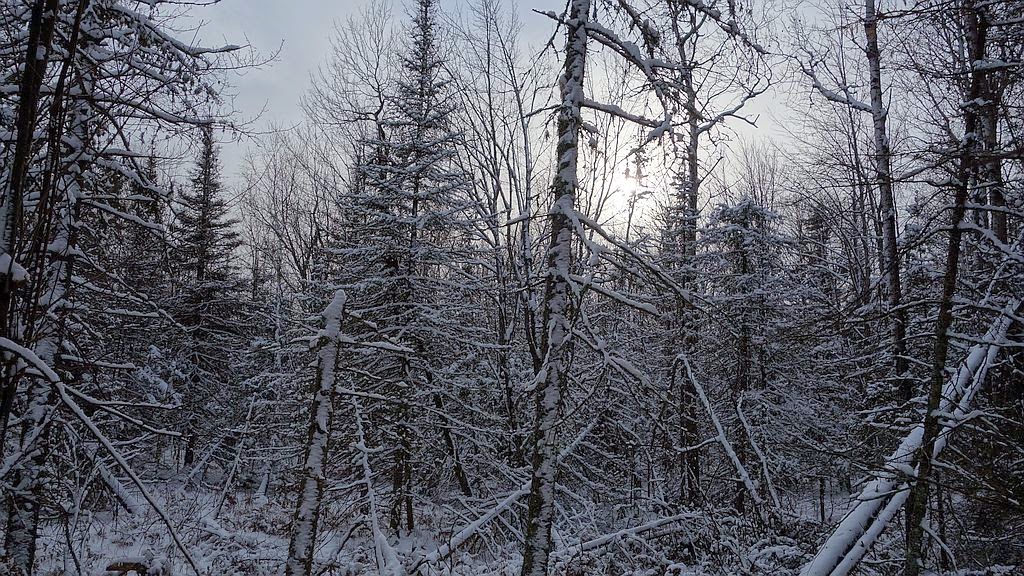 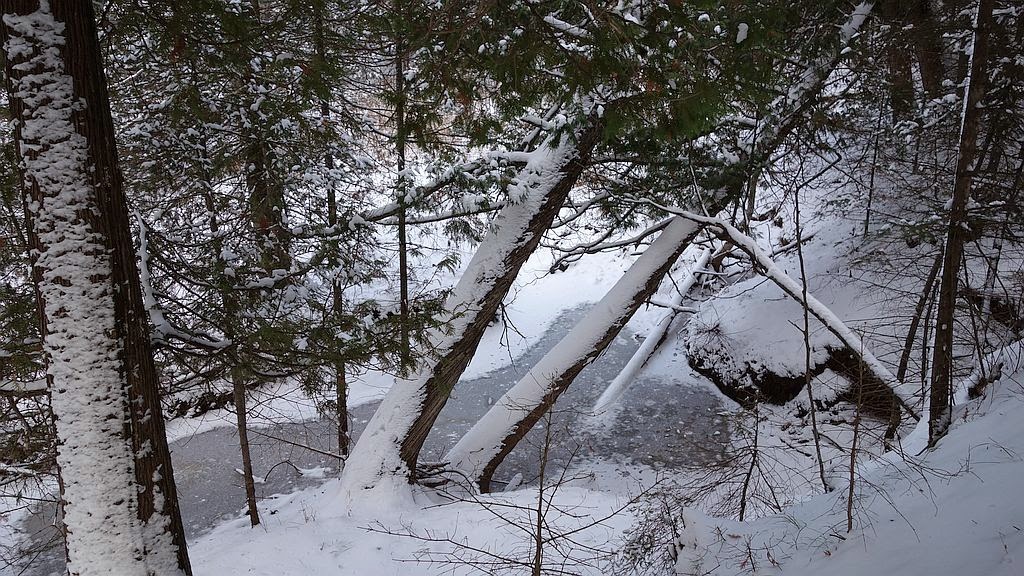 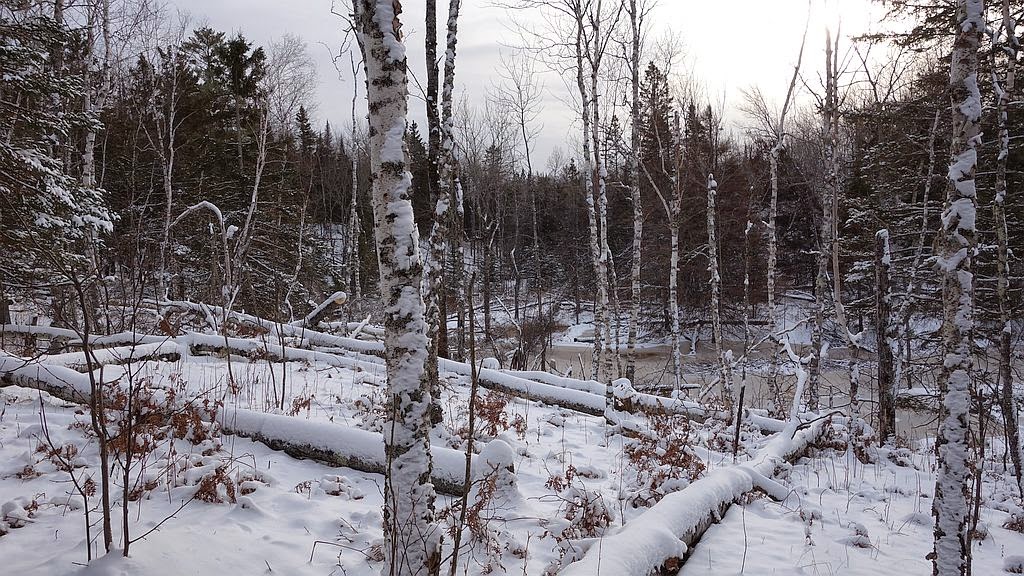 As is the norm for the northeast Minnesota back country you find beaver ponds in every other valley it seems. This one was rather unexpected, there was nothing on the maps to indicate it was there, in fact there wasn't supposed to be anything but a small creek. It would appear Mr. Beaver has been living up to the busy as a beaver moniker.

He was fun to watch, his small pond was losing the battle with the ice though he was fighting the freeze up. He had two holes left and would swim from one to the other and then claw/climb around the edges though his effort was futile, the ice would inevitably win. 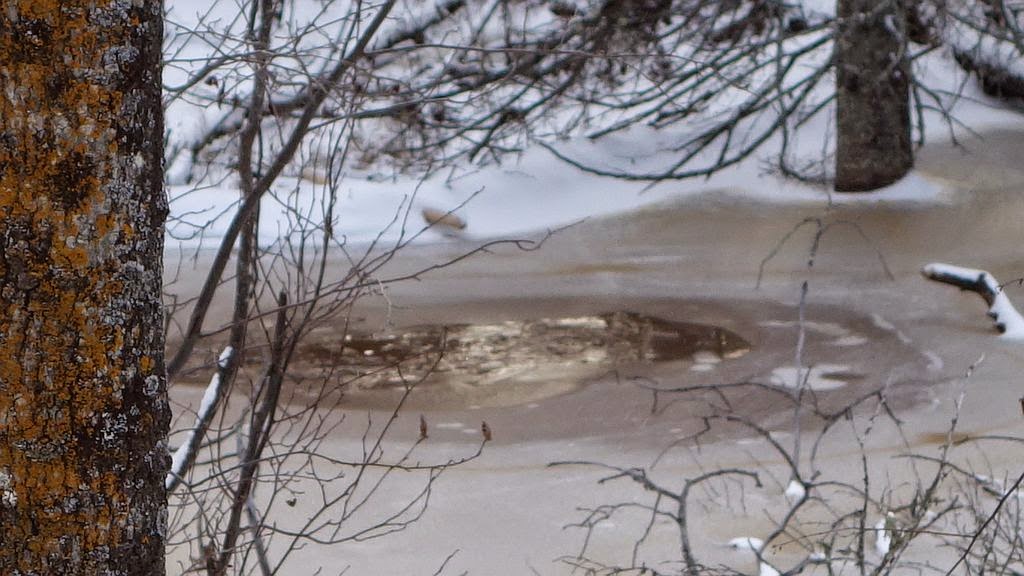 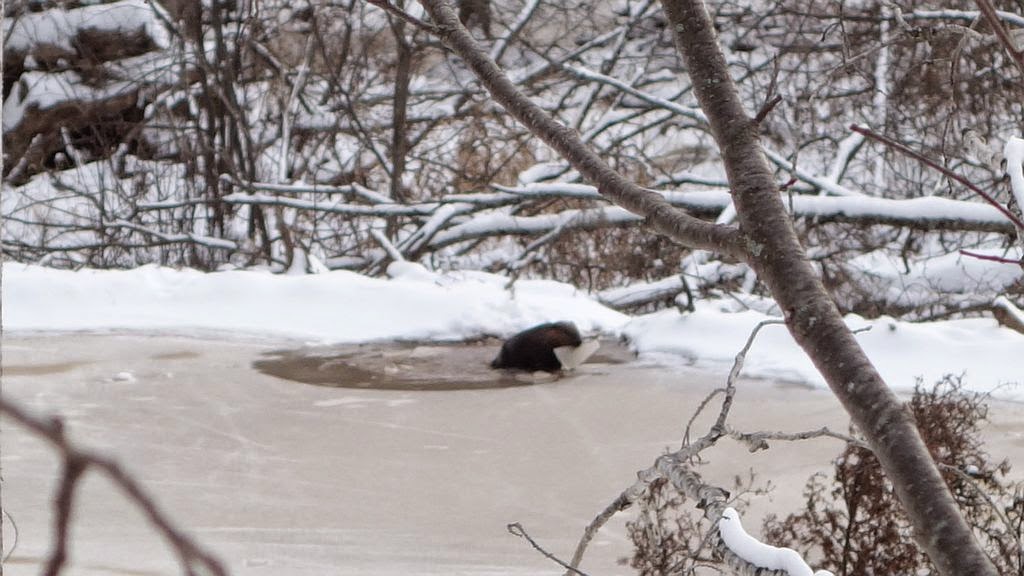 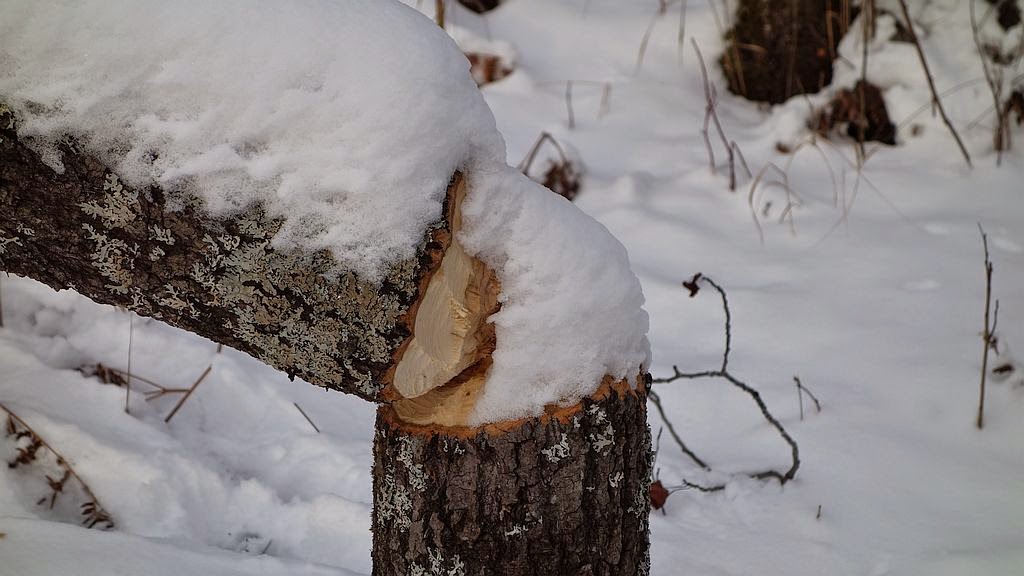 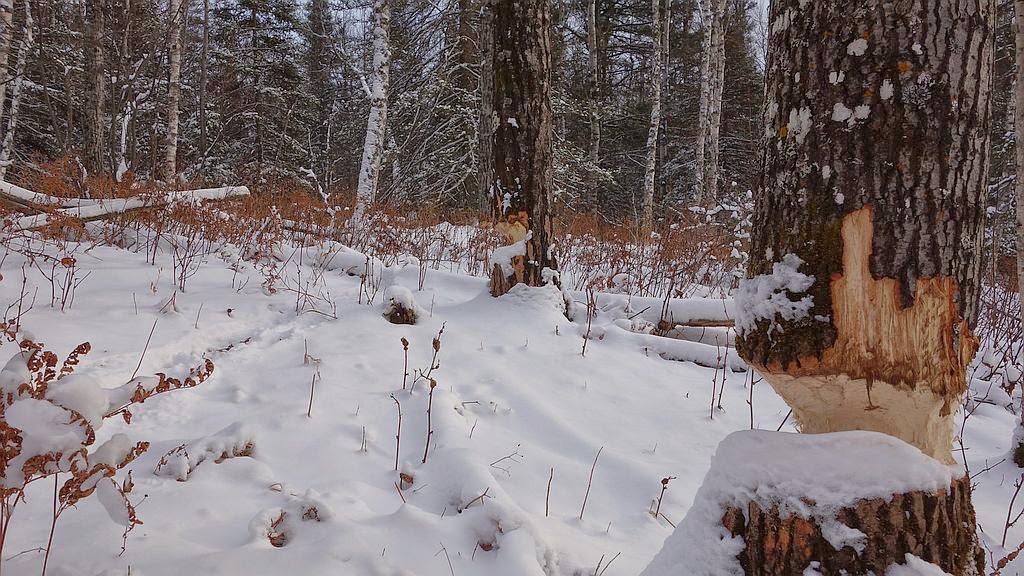 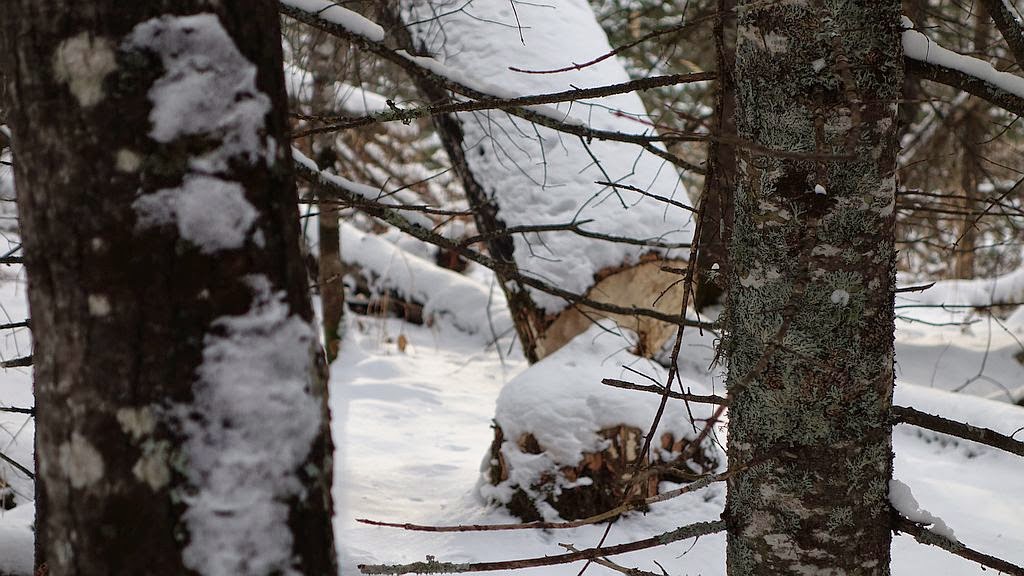 Back down through the drainage towards the river I followed multiple deer tracks, crossed many lines of fox travel, the temperature was dropping though and an ominous feeling overtook me as the sun settled behind the mountain. I shrugged it off and headed for camp. 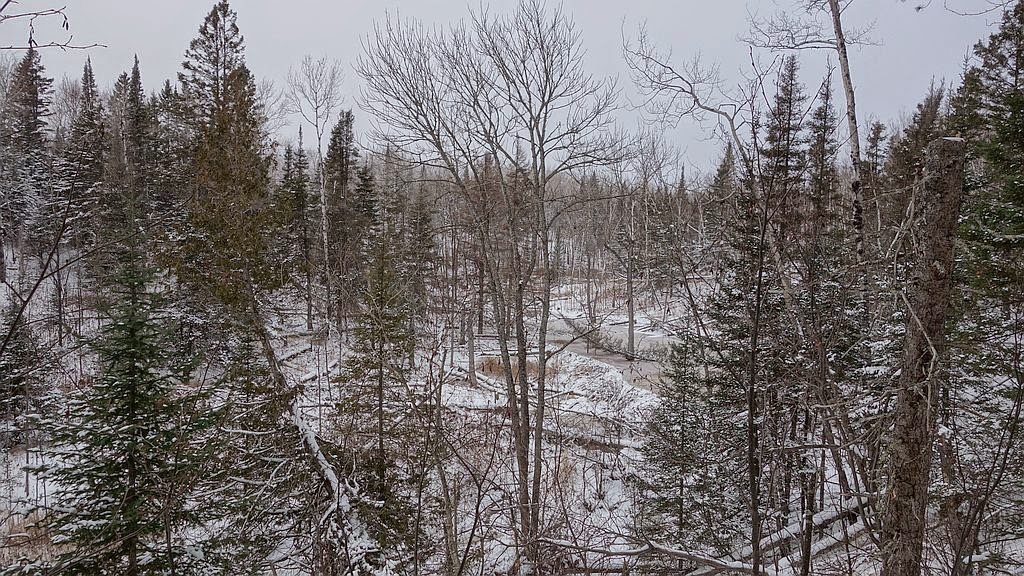 It would seem that no matter just how far back into the wilderness you go, you will occasionally find the hand of man, pun intended. 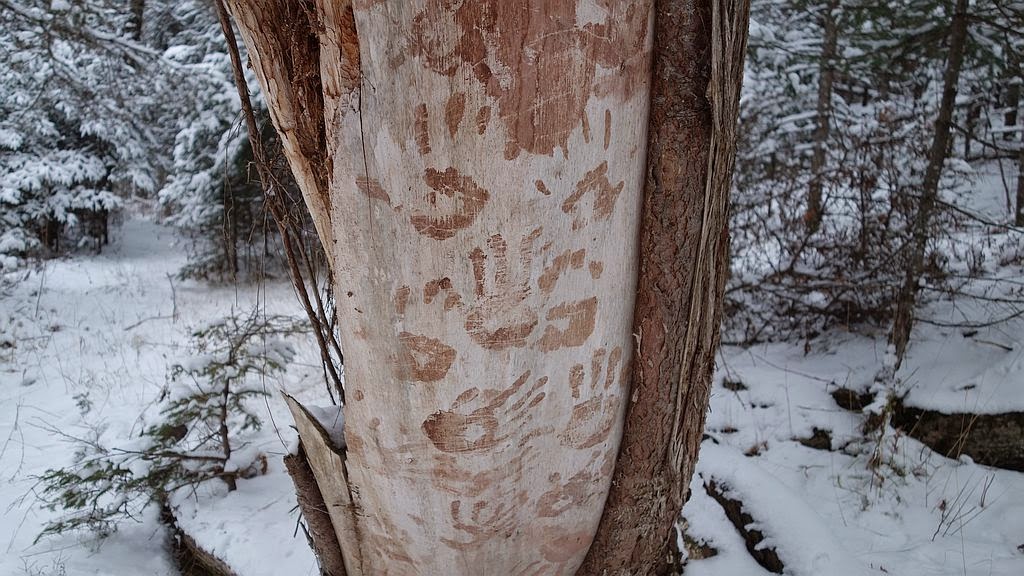 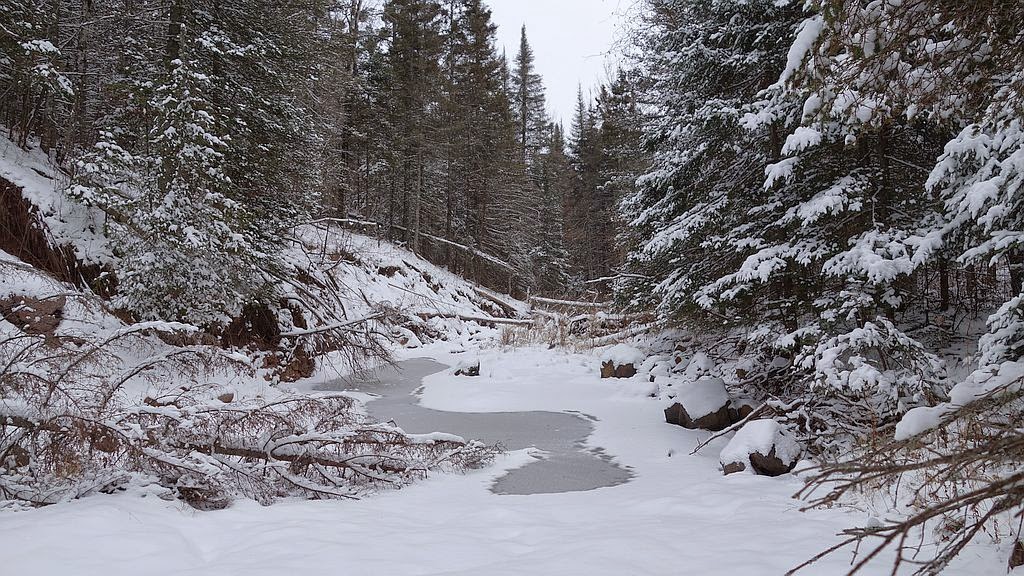 As I rounded the bend in the valley floor there was a flurry of red about a hundred yards further upriver. It darted from the edge of the ice into the tree lines. I stood and glassed, sure enough there was a fox working the area. He came back out close to the edge and became fur, he's going to make a nice ruff around the hood of my youngest daughter's parka. 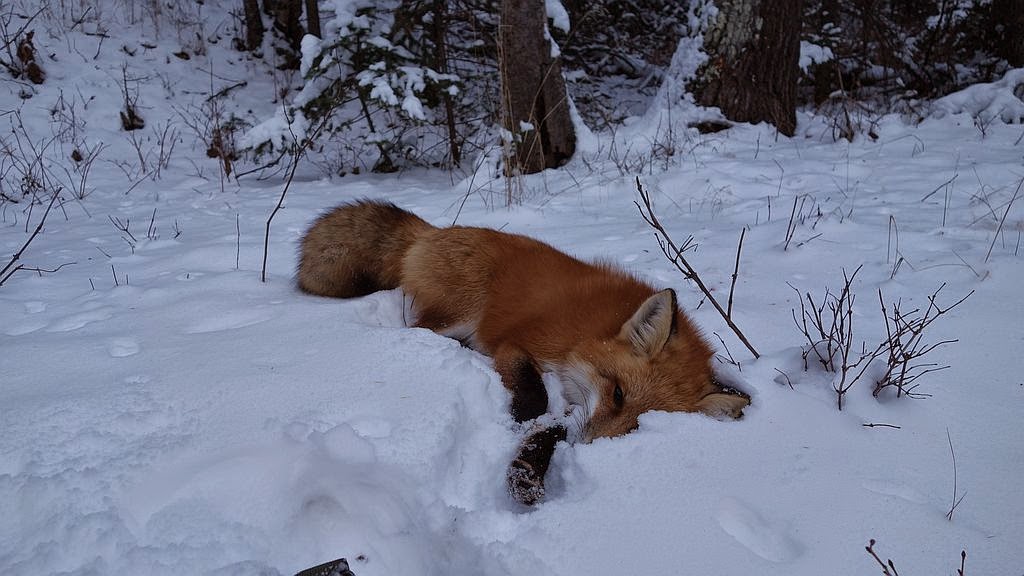 Food was my priority when I finally made it back to camp. I hit the pump on the fuel bottle and connected to the Whisperlite, chicken and rice was on the menu! 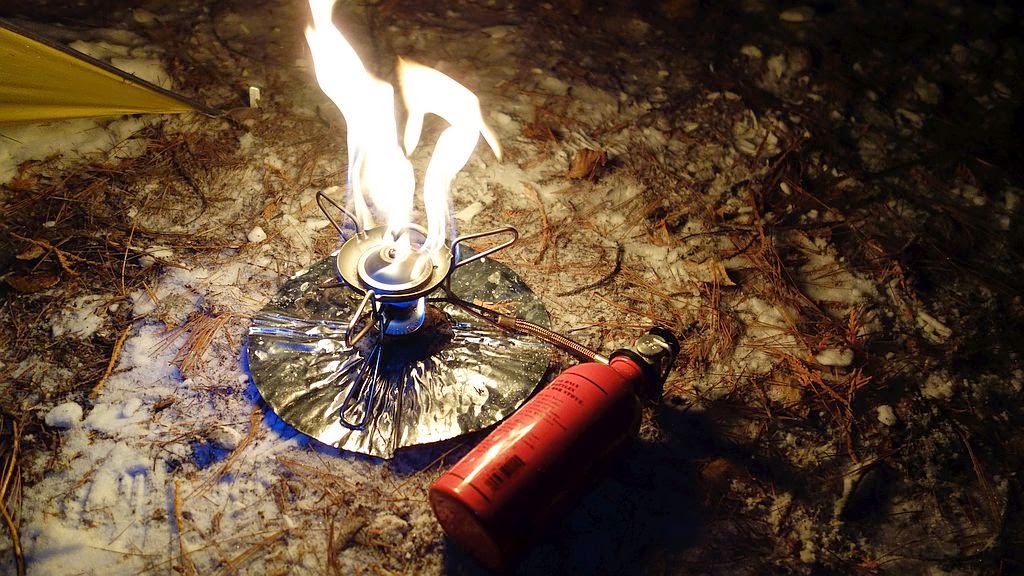 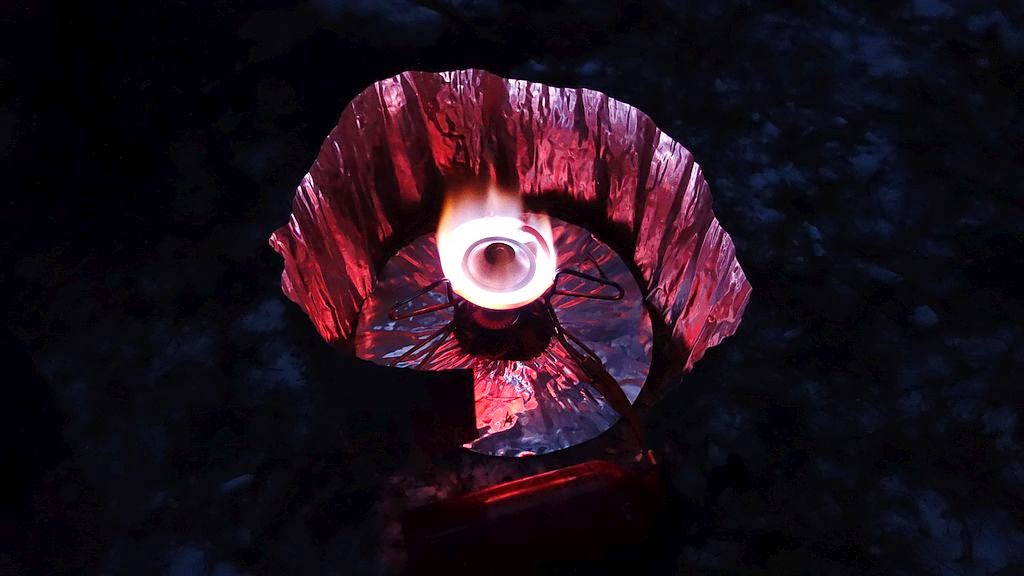 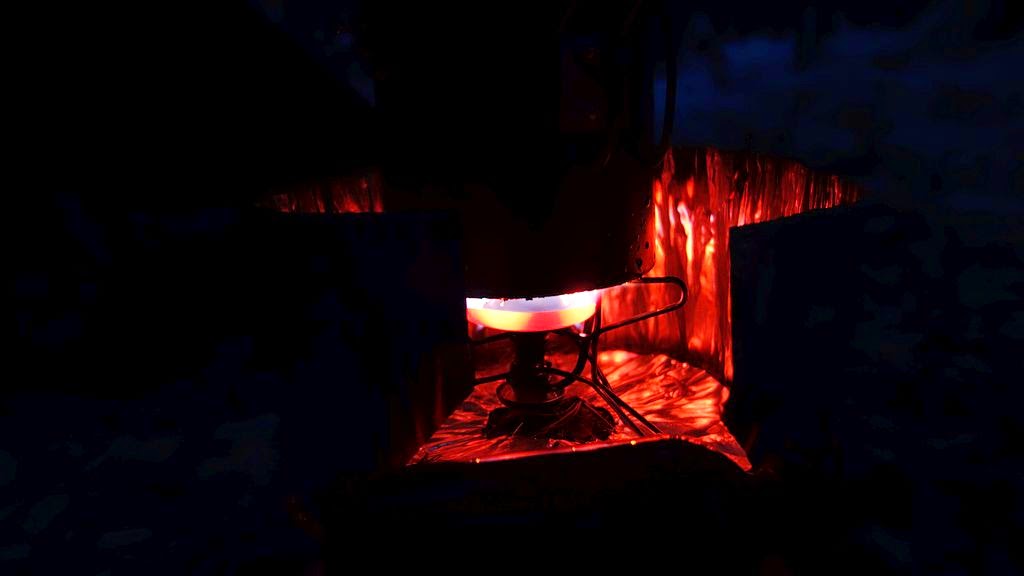 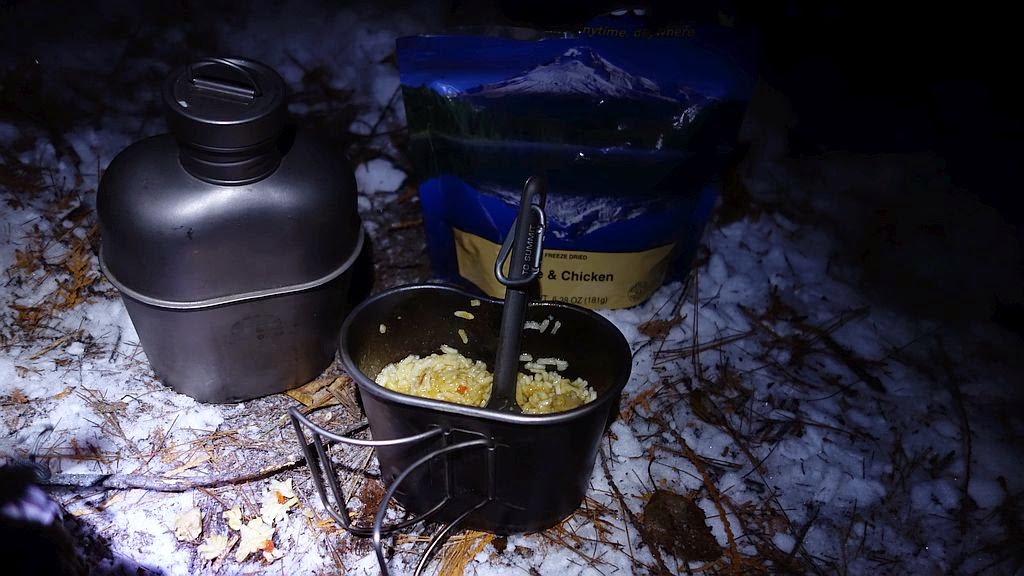 Not long after dinner a light snow began to fall, and thus day one ended. 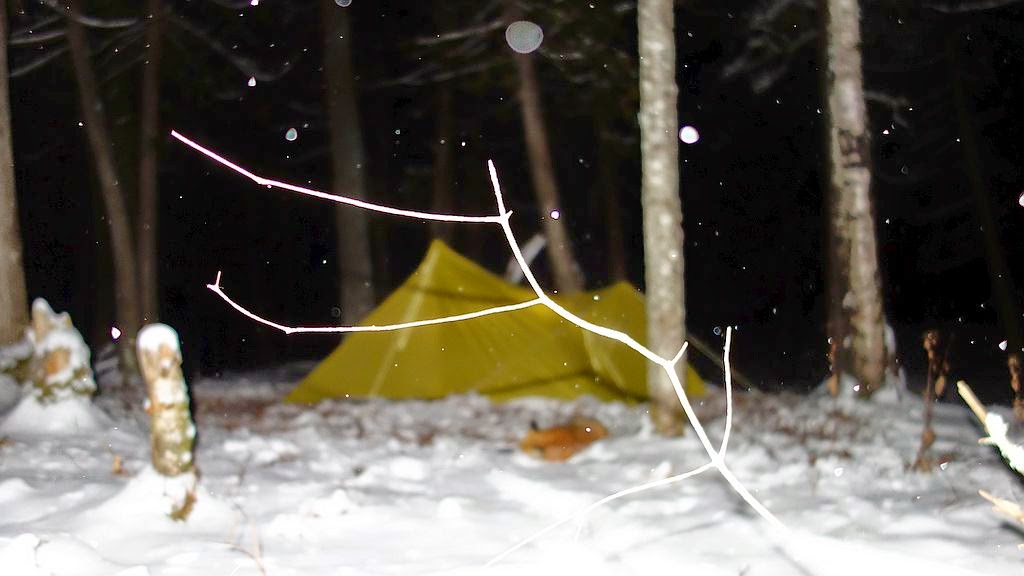 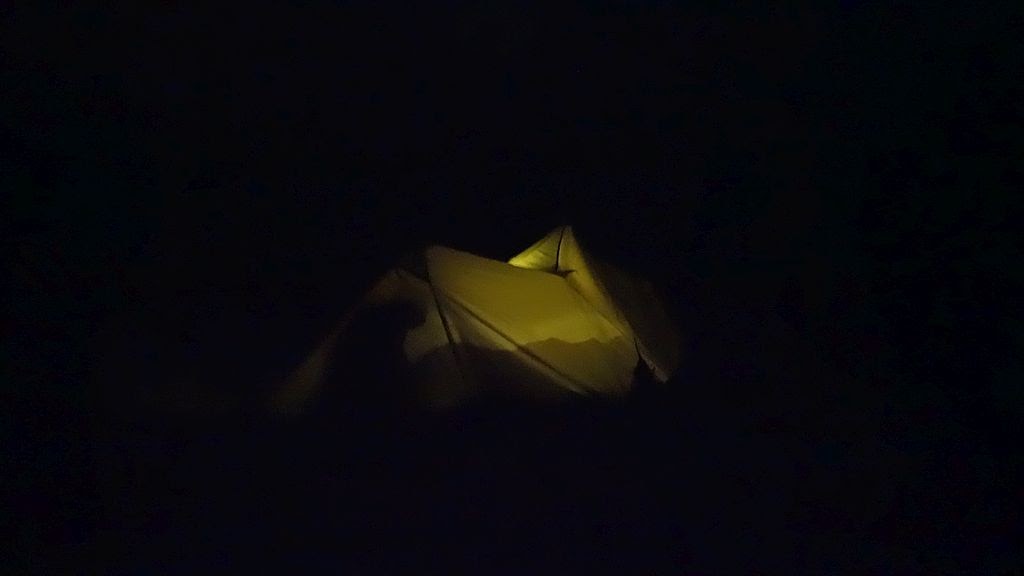 It didn't take long for me to realize I had a condensation problem with the set up. The bivy over the bags was wet on the exterior. My breathing was putting a lot of moisture into the air which would then freeze on the tent walls, but the bivy wasn't freezing it was just wet. The HPG bag was quite damp as a result. I stripped the bivy off the bags thinking it was partly to blame.

In spite of the dampness I was toasty warm to the point that I shed my socks. One of the benefits of the HPG Mountain Serape as an over bag, its synthetic insulation, while wet still provides warmth but more importantly it kept the down bag dry and free of dampness. The system worked.