Of Fox and Rabbits and Turleys Oh My...

If was in fact quite cold this morning, I figure most sane folks would stay inside but I think 'sane' is the only thing I have never been accused of. I was excited though and wanted to get out in the anorak and see how it did. I'd also put a couple snares out last evening and needed to check them so this was as good a time as any.

Early on it looked like it was going to be a cloudy overcast day as the sun did battle with the clouds. 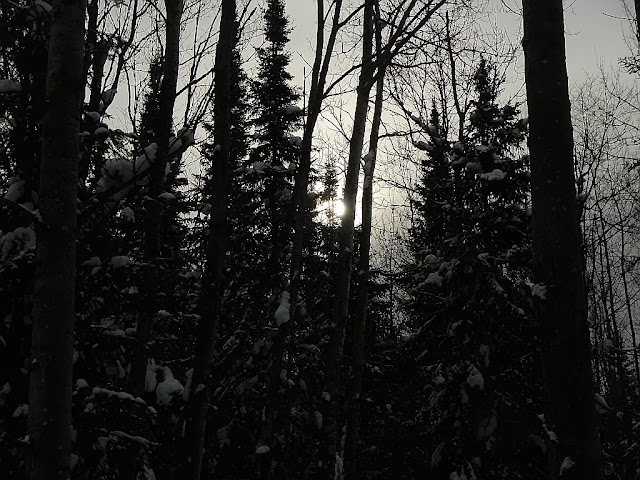 Along with trying out the anorak in extreme cold I also wanted to try out my version of a minimalist gear belt. I've been toying with the idea of setting up an essentials only gear set that is attached to a belt and eliminating the need for a pack. The roughed out system supports fire, shelter, food & water. Other essentials are carried in my HPG kit bag which rides on my chest. This has a couple pieces of emergency gear, alternative fire starting methods, field glasses, navigation kit. I've showed the kit bag before, so here's the gear belt prototype.

Here's the whole belt, from left to right; knife, Moose toe bone fire steel, utility pouch, another pouch that holds my cook kit, Turley Shepherd's Hook, last is the waxed canvas and leather foraging pouch. I've got some updates to work on but this is the general set up. I've still got to add a dedicated canteen pouch. I'll be replacing both pouches I think with something more in line with what I line. These were some I had laying about and pressed them into service to try the idea out. 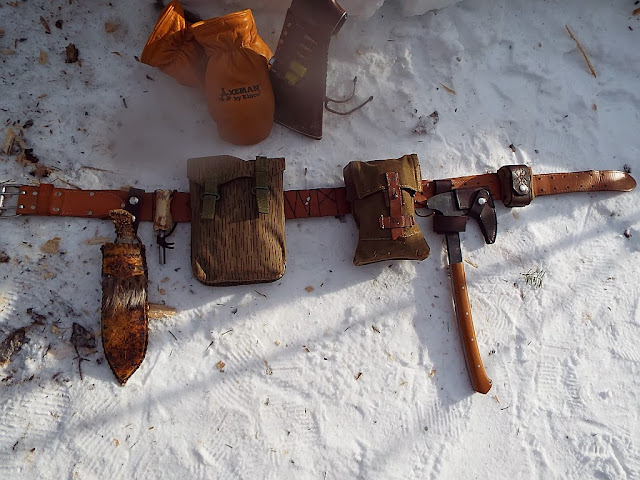 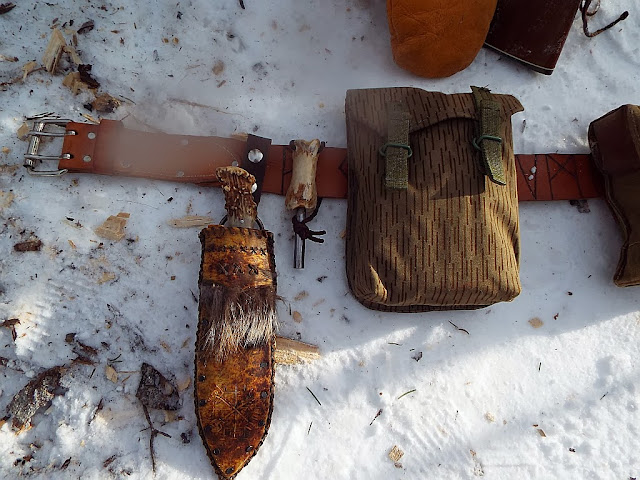 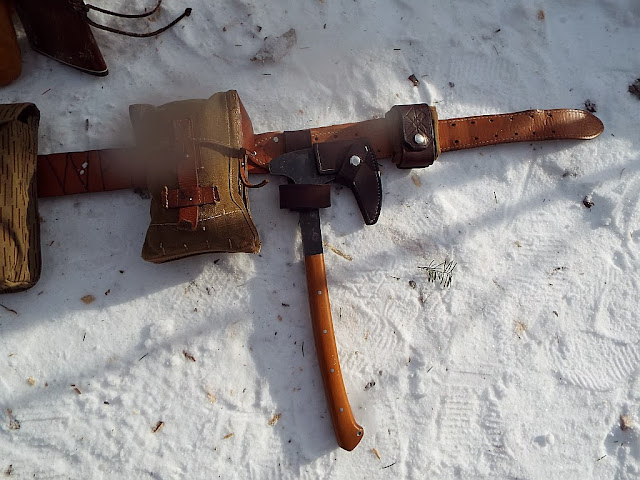 This is the nesting cook kit I'm using for now. It's a Stanley cook pot that nests in the other cup. 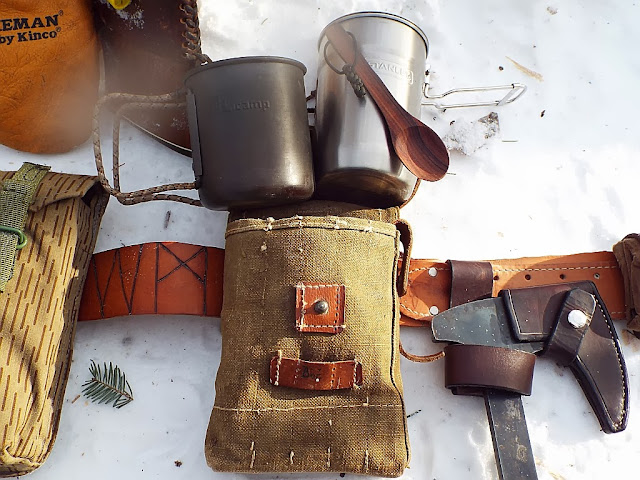 Inside the utility pouch I've got a insulated bottle, in this case nice hot coffee, there's also a multi-tool in there and my snare kit. 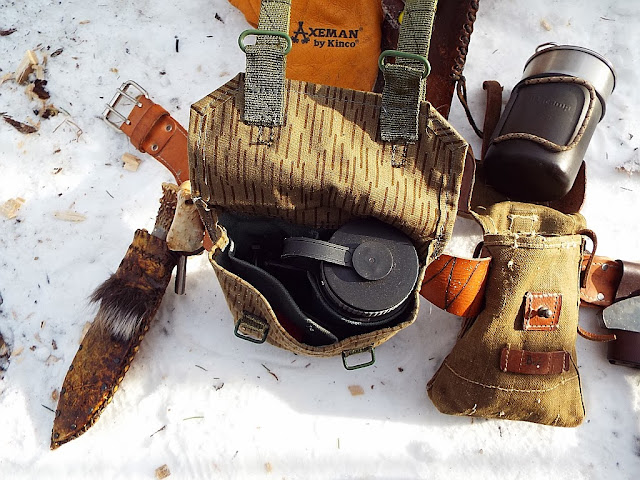 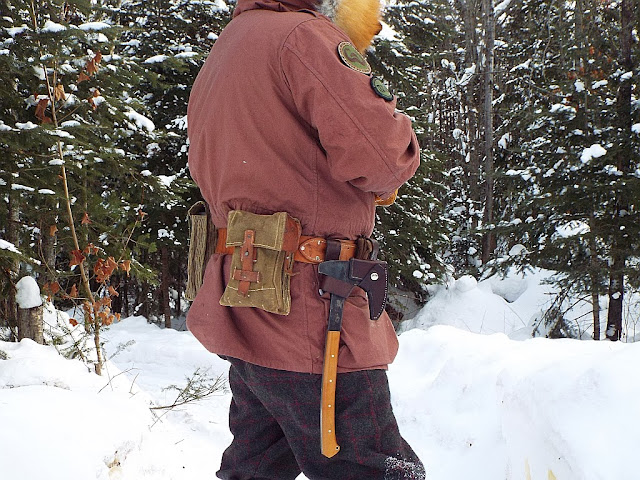 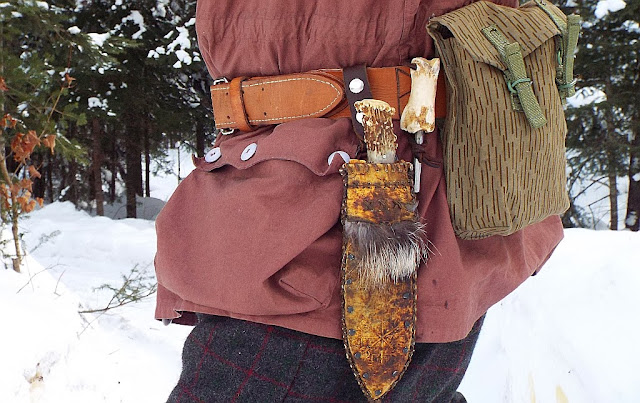 Other than this and  some camera equipment along with the Savage 24V I took nothing else save the snowshoes. The mitts are Axeman 1930 model from Kinco.

On the way to the old hunting camp I checked my snares, first two were empty but the third was a score. A nice medium sized snowshoe hare. 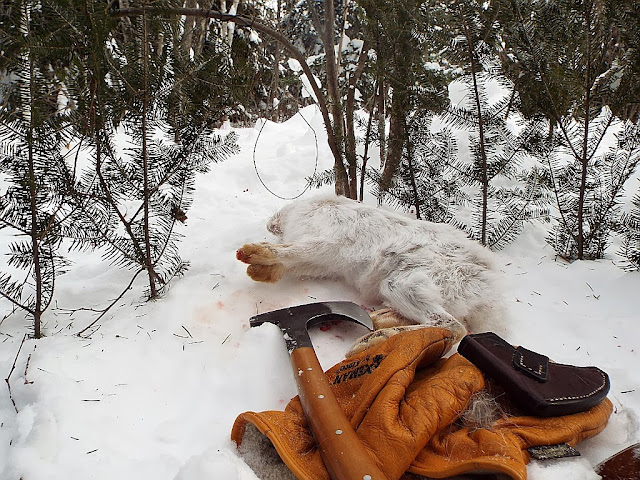 The sun finally won the battle and broke through the steel grey skies. 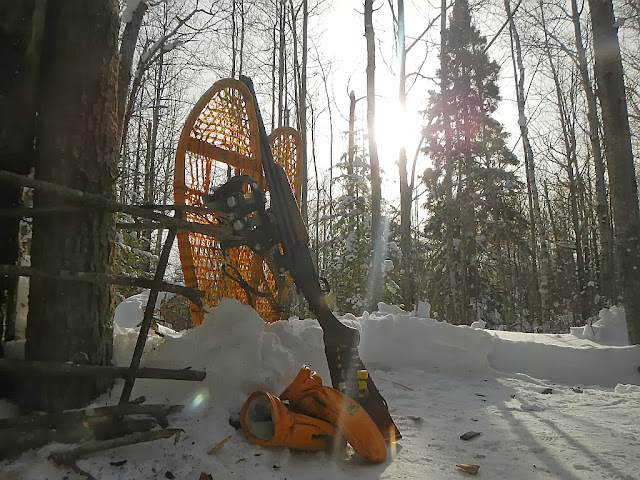 The anorak was doing a fine job. Today I was wearing the same thing as the last outing except no Filson Double Mackinaw Cruiser this time. Instead I had a wool pull over and the anorak. Less bulk, more freedom of movement and actually warmer. The wool pullover in conjunction with the anorak and the fox fur I was pretty toasty even in the extreme cold.

I used the whole fur, uncut, still has the legs and tail. It covered about 2/3rds of my head when up. By using the metal stiffening rod in the hood I can control how the hood rides, half, three quarters, or all the way up thus allowing me to ventilate as needed. I can also tighten it up around the face or open it up.

Frankly I am amazed at how well it works. 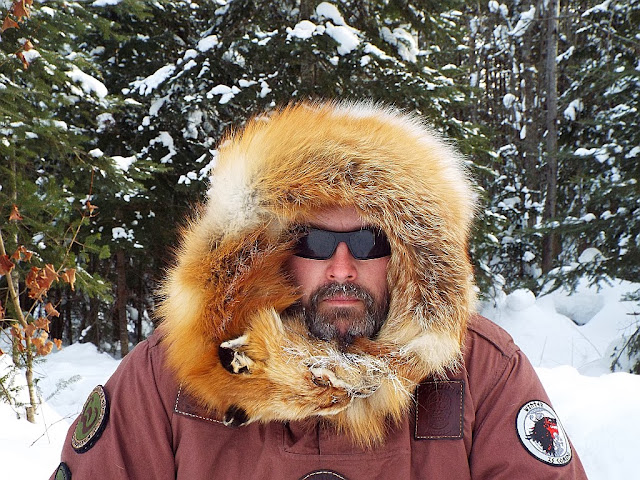 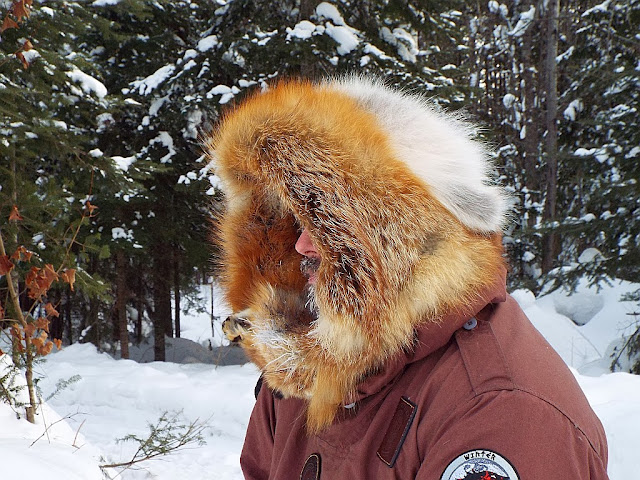 Fire prep time. I made a small bed of boughs to catch my feather shavings. The bottom of the bed was made of one larger stiffer bough to which I left a solid stem. This way when I got my places I could pick the whole mess up with that and put it into my fire lay. 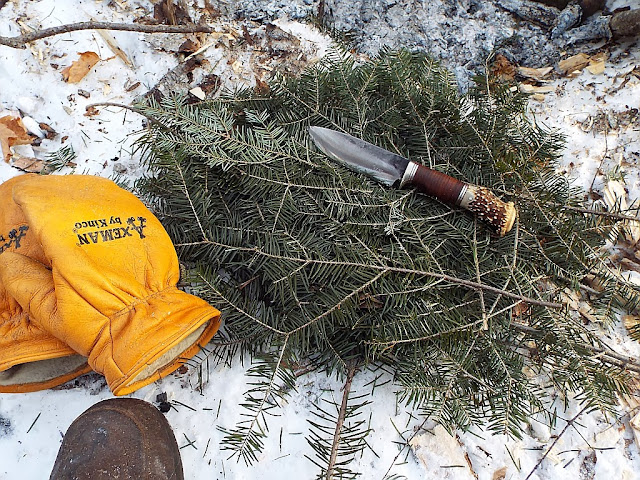 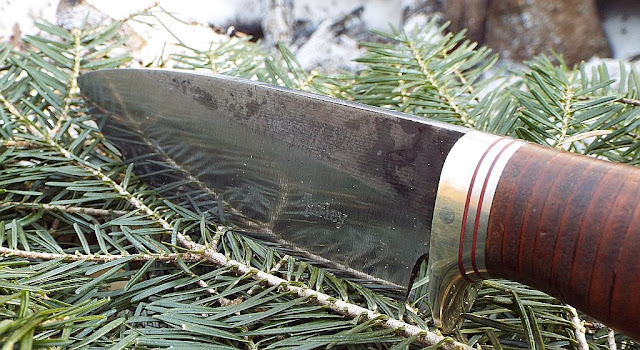 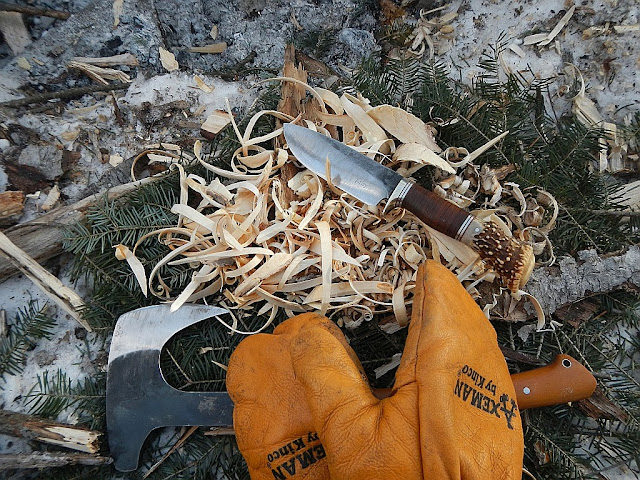 I only took the backstraps from the hare, taking the rest home for a small stew. Heated my coffee up and cooked the straps on twigs. 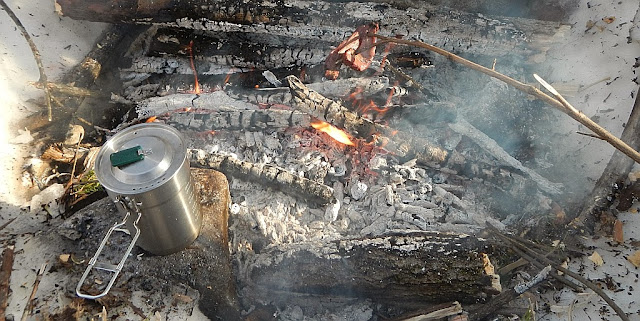 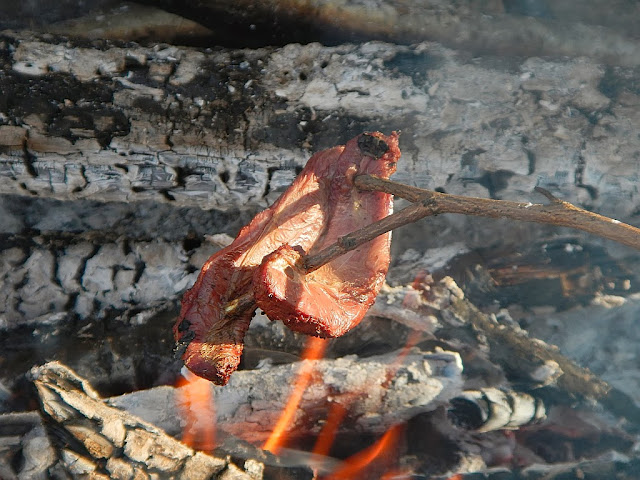 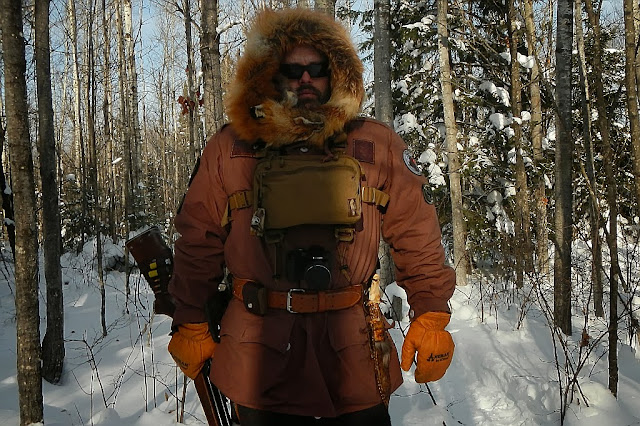 A good beginning to a new year.

Video recaps the above and a bit of fire building etc.