After lunch I headed right back out, my plan was to set up yet again in the Valley of the Beaver, further back from where the fresh water was flowing. My hope was I'd catch them coming back to the water later in the day and close to dark, figuring they'd water up before they set out for the night's hunt. I was also planning on deploying the electronic caller, it has a range of three hundred yards allegedly and I'd been using it at well over a hundred so I didn't doubt it's capabilities.

The hike back to the valley was uneventful save for the fact that the mist had intensified and the wind was essentially zero, it was like a dead calm which had me worried. The sky was battleship grey and visibility was diminishing. 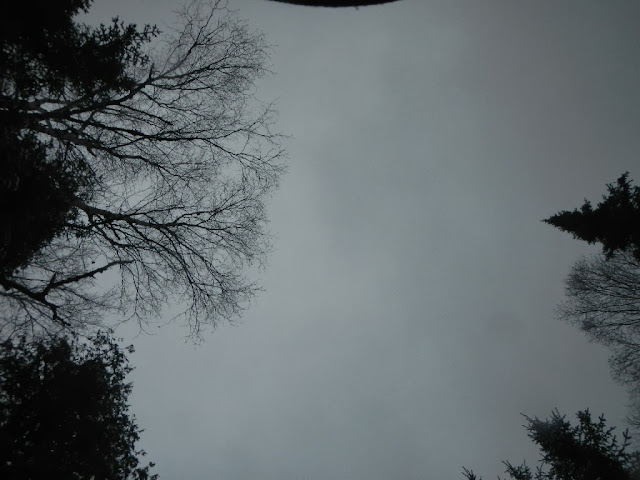 As I walked I realized I had not seen any moose sign of any kind. Something that was prolific during my early scouting efforts. I had not seen a single track on this hunt, just nothing, almost as if they had disappeared.  According to the Minnesota DNR, in a report they released back in February of this year, the rate of population decline has accelerated dramatically, that the northeast population declined 35 percent from last year. Since 2010, the moose population has declined 52 percent. Based on the aerial survey conducted in January, the new population estimate is 2,760 animals, down from 4,230 in 2012. The population estimate was as high as 8,840 as recently as 2006.

In the years that I've lived here there has not been a year until this one, that I did not observe moose in the wild. The last calf I saw was over two years ago, and I've not seen him since though I routinely haunt that area. The cow was active there for years and I'd seen her with more than one calf but no longer. It is in doubt that the moose population will recover in my lifetime, which makes me think of the first encounter I had with a moose and how I felt, and how my sons may never know this feeling.

Once back in the valley I surveyed the surroundings and spotted another overturned tree with a massive root system above the ice about two hundred and fifty yards from the watering hole. It was situated nearly in the center of the area and offered concealment with a very wide view across the valley from north to south.

I put the e-caller half way between what would be my hide and the water hole. This would give me a good amount of distance and still enable me to use the caller. Based on the terrain and tracks I was expecting that if they came in they'd becoming either from the north or the south and I had both vantages covered from the hide. 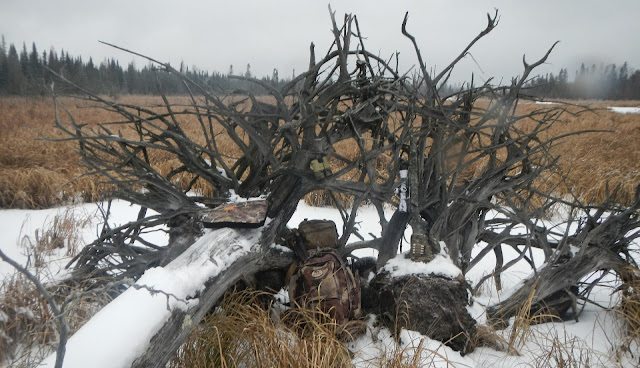 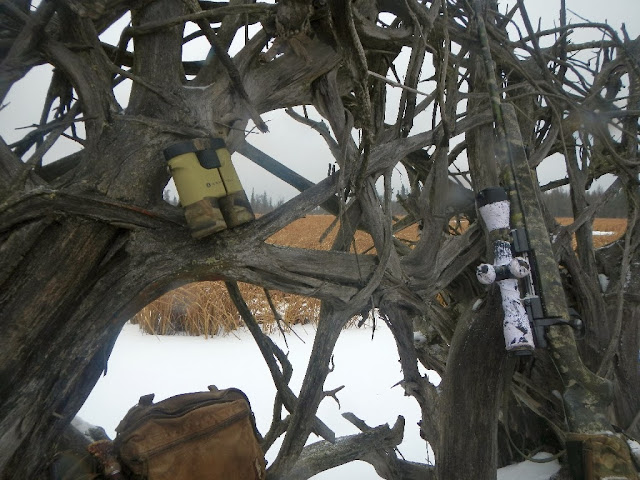 I felt the set up was a good one, I knew there were wolves in the area, I had good cover and could see a great distance so I settled in and started glassing. I had about three hours of light  left, a full belly and a high hopes.

As time wore on I started glassing in cycles, spending about fifteen minutes on the glass and 15 minutes off to save my eyes. A slight wind had picked up from the north, while light it was a stinging wind, definitely colder air moving in.

I fired the caller up and it worked at range, I started with distressed rabbit and almost immediately I had a small owl come through and light in a tree near the caller, he was looking for what he could hear. 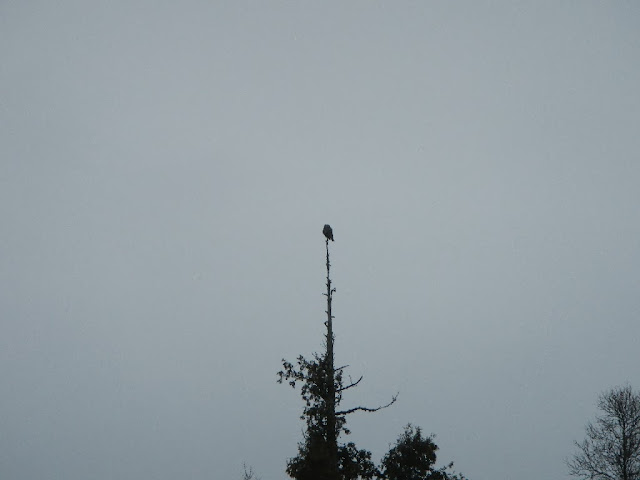 He was too far away for the camera to get good shots of but he was enjoyable to watch. The caller had him confused, he'd take flight and buzz low over the ground near the caller then back into a tree. He did this repeatedly each time landing in a different tree and trying to find the source of the sounds. After a while he gave up and flew off.

I shut the call down and let it go quiet for about an hour or so. The valley was silent again though I could now hear the wind getting a little stronger. 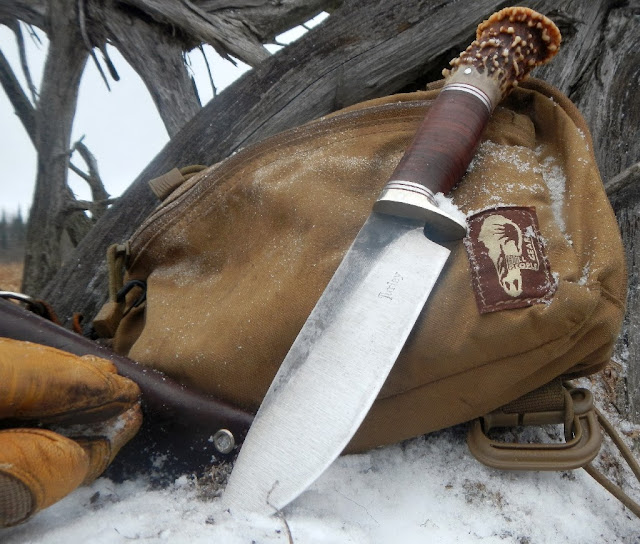 The caller I am using has the ability to do two calls at once. I set off the female coyote howl and then about ten seconds later the male coyote, this gives the impression that they are answering one another. I got a response within a couple minutes but it was faint, I could hear wolves howling again for the first time since the end of day two but they sounded way off. I started glassing again.

The minutes began to creep by, I paused the caller and listened for the wolves but could hear nothing now. I waited fifteen or twenty minutes and fired it back up, again I heard or think I heard howls in the distance but couldn't be sure.I didn't know if the picking up wind was diminishing what I could hear or if they were moving off, or even if they were responding at all.

Frustration began to mount. I used to stand hunt all the time, there was a time I would sit in a tree from dawn till dark but over the years my patience level for sedentary hunting has waned. I know full well that ambush hunting of this sort is productive though quite tedious over time.

Light was waning fast now, I set the caller off again and glassed for all I was worth, nothing. Nothing but wind and cold and mist and a hunter's fading hope.

I continued until I could no longer see. Strapped my pack and gear back on a now freezing frame and set off in the darkness towards my camp.

Like all hunters I have moments of dejected disappointment to deal with. Hunting is hard hairy serious business. It's filled mostly with idle time interrupted occasionally with heart ripping moments of intensity, intensity that drives the body and mind into a state that cannot be had through any other pursuit that I am aware of.  That moment in time becomes a crystallization of  emotion and physically intensity, time slows, vision becomes incredibly sharp, awareness hits a high, a heightened sense of smell and hearing. This is what it feels like to be an apex predator, the senses become such that they are nearly overwhelming. In this moment life is sometimes taken and given, this is what it means to be a hunter.

As I walked through the darkness I was lost in self analysis, in consideration of my hunt and hunting in general and what it means and is to me. I hunt for a lot of reasons, chief among them is sustenance for my family and myself. Roughly seventy percent of our meat intake comes from the wild, from a hook, a bullet, or an arrow. I am acutely aware of the fact that I make things die so that I and mine may live. Of course I could sub contract this work like most folks and let my meat come by way of someone else killing and butchering, packing and shipping meat to lay beneath the florescent lights of the meat case wrapped in cellophane and styrofoam. I don't judge or condemn those who do this, I bear them no ill will nor do I malign them, but I cannot do this for a number of reasons.

I want to know it was my hand that made the meat, that this gift from the wild places came by my effort. It helps me feel a part of the cycles, it helps me understand life and death. It solidifies my feeling of responsibility to my self, my family, and the natural world. There was a time when I could not hunt as a result of time constraints and where I lived. I knew what it meant then to be outside of the cycle, to be out of touch and a sense of being lost and without direction overtook me during that period.

I choose to be a part of a world, a cycle that many believe to be a archaic barbaric throw back to the primordial mists of our distant past. I chose to when I can, envelope myself in what is to me the natural world where wits, sinew, muscle and mind combine with instinct and knowledge and lead a man to sustenance, to experience, to a place where the soul feels energized and fulfilled. There's more that the body and mind require than mere food, there is something inside that flies within me, the closer I get to the natural world, the closer I get to the old paths.

This feeling extends beyond hunting, I also feel this in a different way when it comes to the food I raise, from the garden to the chickens, it is sustenance as a direct result of my effort, directly, not through a third party but directly through my own efforts.

I have heard it said, and have said it myself, that the hunt is the reason I do it, not the actual kill. Being honest with myself it is the experience of the hunt that drives me, but so too does the culmination. The cycle is exactly that, hunting is only a part of it, completing the cycle requires killing, without it the cycle does not complete.

There is ancient wonder in the hunt, we're hardwired for it though I think many have lost the understanding and the feel for it. I know my mind clears, my spirit climbs to higher levels than the way I feel on a normal day to day basis. I breathe differently, I walk differently, I notice more, smell more, hear more, I find I feel more alive.

So how does a sustenance hunter, a meat hunter, reconcile the hunting of an animal he will not eat? This is the sticky place, the grey place, the place that is hard for me to articulate in a way that I am comfortable with. There is the logical piece where the managing of the wolf population is the primary reason, this is easy to understand to me. Then there is the predator in me that is similar to the wolf, who also will kill other predators when opportunity arises, the wolf does this to protect turf, to eliminate competition, which in turn leads to more security and resources for the wolf. Am I not also doing the same thing?

These were the thoughts of a wandering mind as I walked into camp, tired, cold, and hungry. My mind shifted and thoughts of bacon wrapped backstraps became all I could think about.