Day Four - The Beginning of the End

I woke stiff and sore, the miles and terrain and cold temperatures were beginning to take their toll. I was very tired even after sleeping, pain in my knees was intensifying. I rolled out and decided once again to forgo a full breakfast instead I downed some cold smoked ham and had some oatmeal. Today I wanted to head towards another highland area that I had not been to yet, where the trees were more deciduous than spruce in nature. I figured I'd hunted the lowlands hard enough and probably should shift to a new area.

I preemptively put the fixings for a fire in both the wood stove and the fire pit, it was definitely colder today than any of the previous days and the wind was up, there was a change coming in the weather. I was kicking myself for forgetting to bring my emergency radio. I had gotten it out with the intent to take it with me but I left it behind on the gear bench. The last forecast I had seen was now four days old and virtually worthless. I had not seen the sun since Friday and then only briefly at sunset. The endless grey was all I'd known and with no clouds to read I had no idea what was coming.

The trail I was on leads through some moss and firs on the way to the high country. 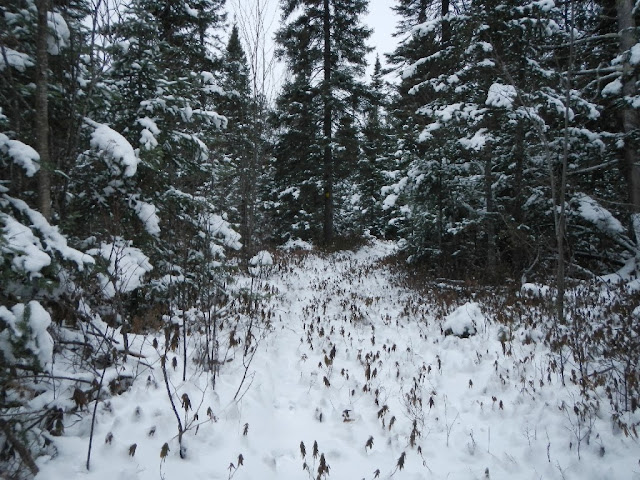 More of their scent marking. 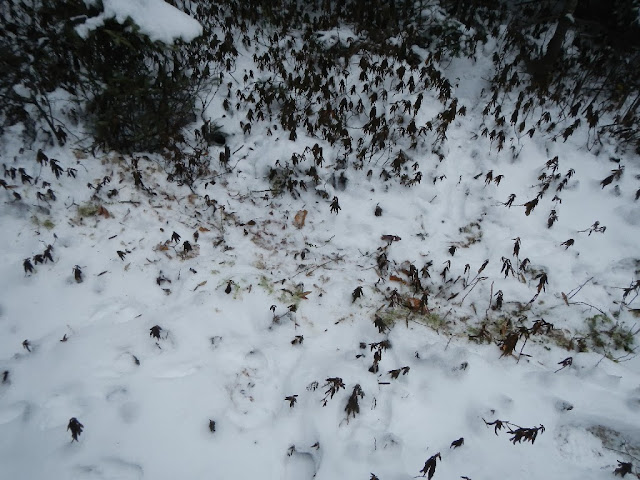 As I was passing through this section of the forest all was stillness, here in the firs the wind was low to nonexistent, there is a reason wildlife takes cover in areas like this. I was creeping along in still hunting mode, a few steps and then stand for a while and observe. About a half hour into this I had my heart jump into my throat at an explosion of sound and fury.

There are two things on this earth that have the ability to startle me this way, one I haven't heard in over twenty five years and hope I never do again, the other is the flushing of a bird underfoot completely unexpected. Grouse was the last thing on my mind when this one busted cover and flew about twenty odd yards from where he'd been holding.

I peered through the understory to where I thought he'd gone to ground. I slipped my pistol from the HPG kit bag while slinging the rifle on my off shoulder. There he was, standing still and looking at me at nearly thirty yards. I had an opportunity at a fresh meat lunch so I took it. I don't practice a lot with a pistol these days but it's good to know I'm still at least a fair shot. The .40 caliber round was just above the shoulders but below his head. 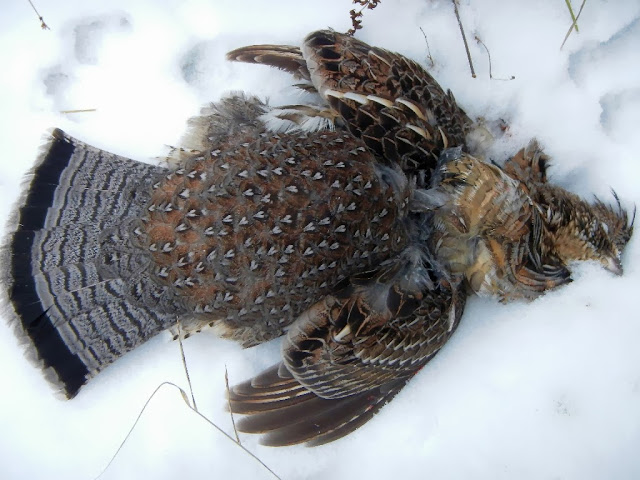 I cleaned him on the spot, laid the meat in the snow for moment, cooling it quickly and then into the pack, going to be a good lunch. 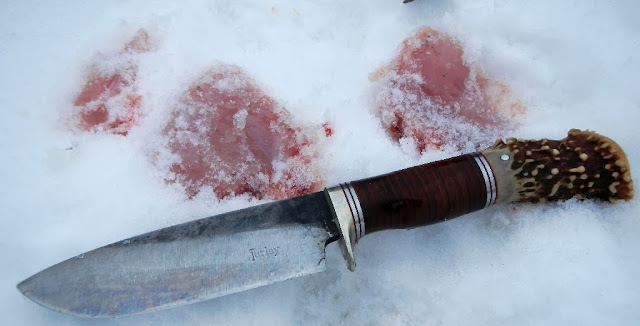 Good sized chaga horn, I marked its location on my map, I may return for this one someday, it's a good one. 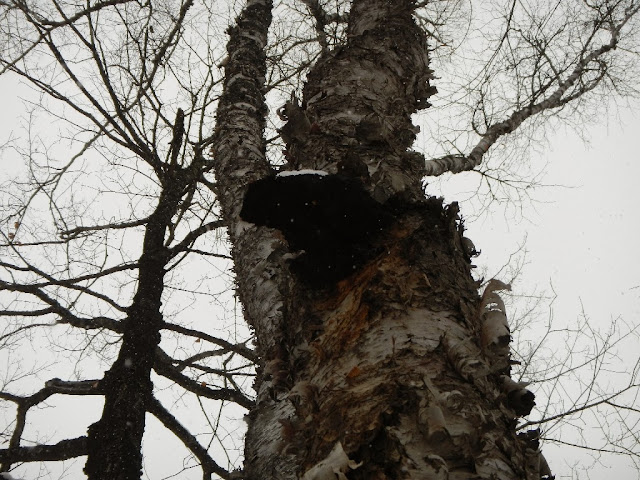 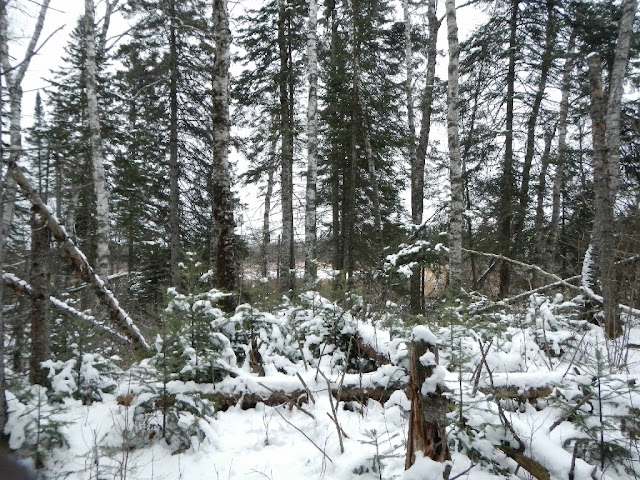 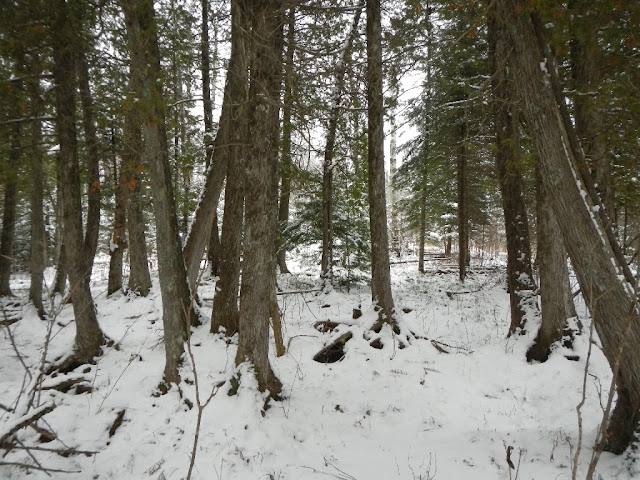 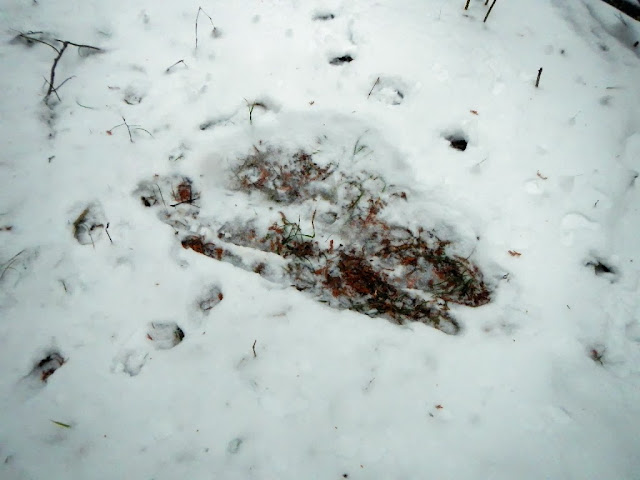 I sulked along the forest trails until early mid afternoon without seeing any sign of wolf. No tracks here, some deer activity and flushed some more grouse whom I left alone, but no wolf sign, old or new was to be found. Figured it was time for lunch.

I chose a spot near some downed trees, gathered some dry twig wood and laid up a quick teepee fire, with some birch bark for tinder. While setting this up I once more marveled at the gift to the woodsman that the birch tree is. There isn't a part of this tree that I do not use and I use it more than any other tree in the north country. I grew up in the halls of oak and hickory but little to no birch at all, here I have firs and birches and a fair bit of maples. While I miss my oaks I do not think I could live again where the birch is not common. Here it's two out of six trees at a minimum. 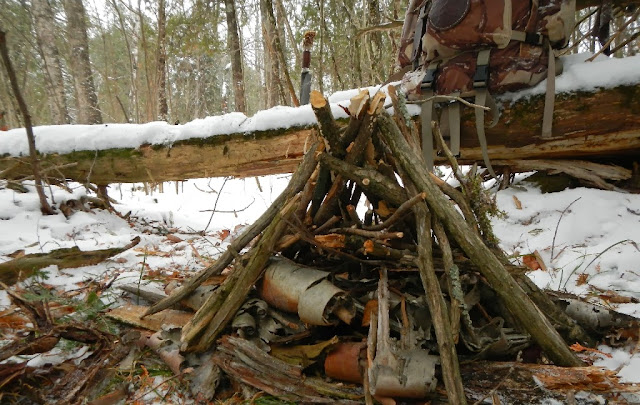 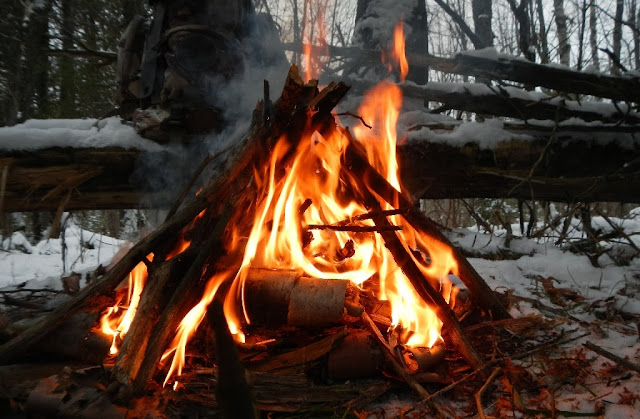 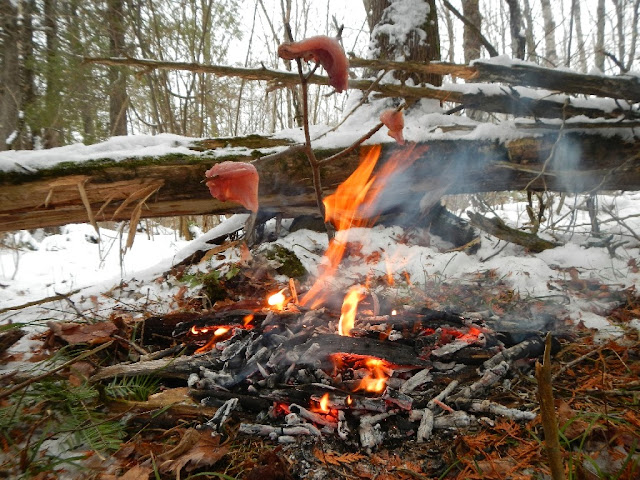 It was a quick but exquisite lunch though not as filling as I wanted, merely whetted the appetite. Grouse are good eating like this but without something with them they don't go that far. I was already thinking about dinner which is breakfast for most, I'm a freak for bacon and eggs any time of the day and that's what I was planning for dinner.

Packed up and ready to hit the trail again. 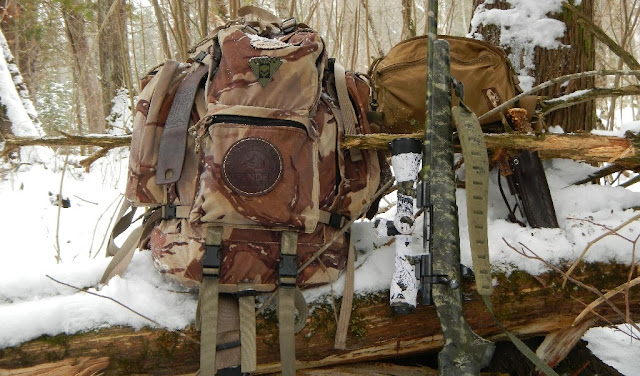 Other than early in the morning I had not seen any other wolf sign, place was devoid of it and I knew I'd come to the wrong place. While a costly mistake in that it cost me a day, I did learn something. The wolves seemed to like the lowlands much more than I had figured.I think they've evolved to like the proximity to deep cover and I also think there are probably better den opportunities there than in the highlands. I have no idea if this would hold true outside of this area though.

On the hike back towards camp I took a side trail and ended up in some fairly big woods that I was unfamiliar with. 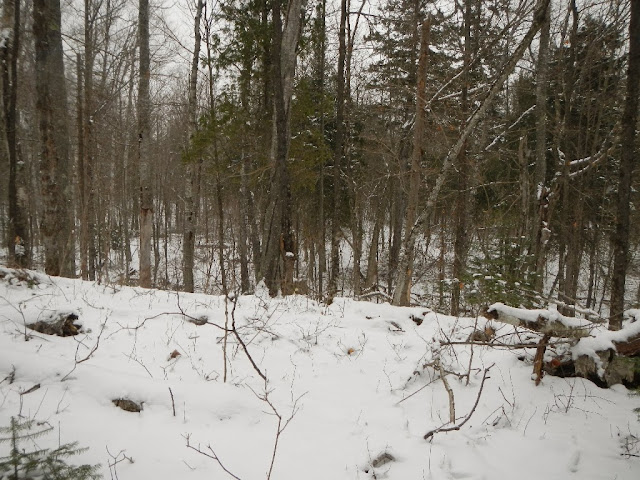 These fellas were working the trees in this area and seemed to move with me for a while. They are either Downy or Hairy woodpeckers, they both have the same markings and are hard to tell apart at least for me. The Downy has a smaller beak and small black marks on white tail feathers. 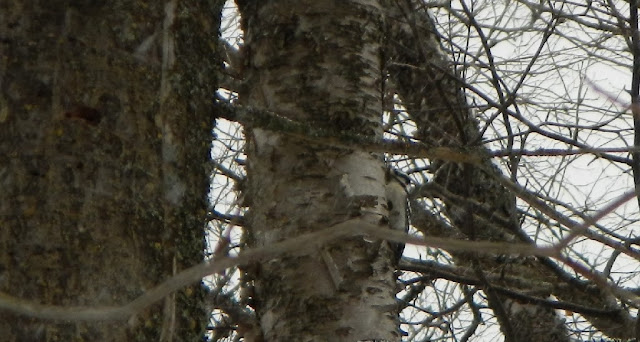 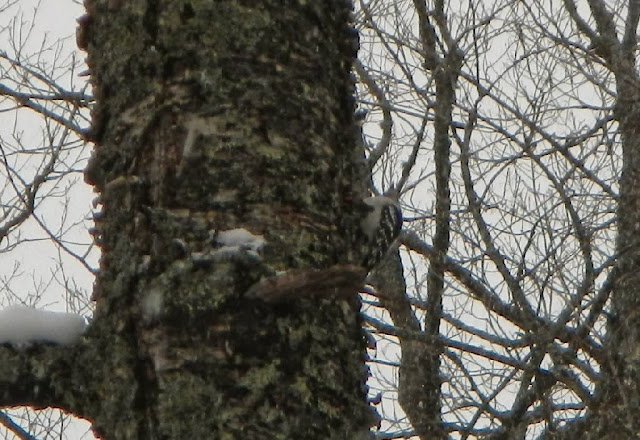 In wandering this part of the forest I never found any sign and soon even sign of deer disappeared. It's a fairly deep wood and o more than one occasion I had to take a compass heading to make sure I was on course. 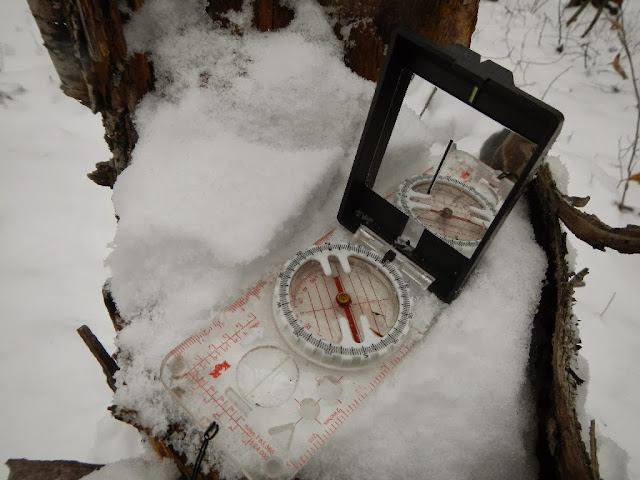 I ended up back on the trail earlier than usual, I was exhausted and dragging my feet along with my right leg, happens when I get really tired. I was quite happy to stumble back into camp with some light left in the day.

Time for some hot bacon and thick over easy eggs campfire style. 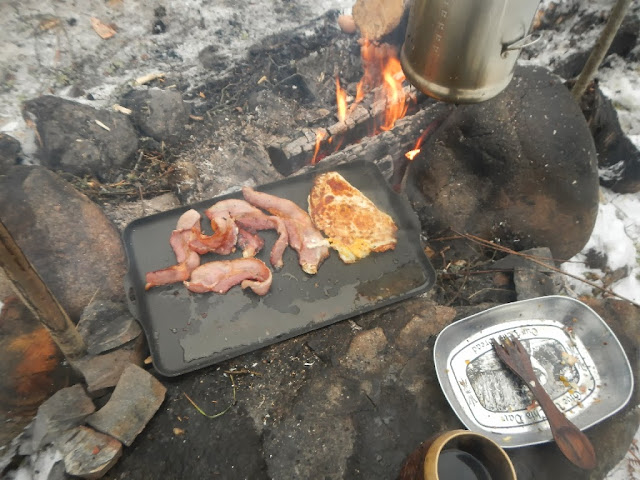 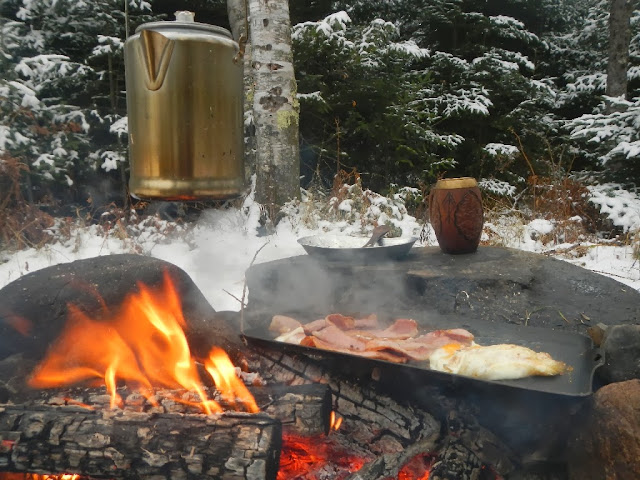 After supper I spent some time getting a final night's worth of wood together and tidying up camp. tomorrow would be the fifth and final day of my hunt. I got a fire going in the wood stove with no light left and snow beginning to fall. I was going to try to keep a fire through the night in the hopes that I wouldn't find the morning as rough as the past couple.

With the stove glowing I slipped off to sleep. 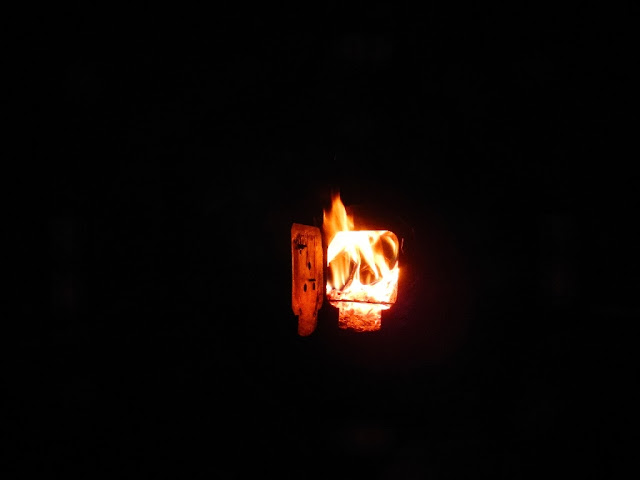 I woke up coughing.

For several seconds I couldn't comprehend what was happening or where I was. My eyes were burning and breathing was difficult, woodsmoke was overwhelming, I could hear the wind howling and I struggled to get out of the sleeping bag. I grabbed my headlamp and lit it up, nothing but smoke in the tent. Hacking and wheezing I got out of the tent throwing the front doors wide open and was smacked hard with how cold the wind was and how much snow was falling. The wind was incredible and sliced through my thermals like they weren't even there.

There were several inches of fresh snow on everything, the wind was blowing hard enough that the stove simply wasn't drawing at all now but instead was just coming out in the tent. I hacked and gagged and coughed some more. Smoke was rolling out of the tent and I was fast approaching popsicle status. I went back in the smokey tent and grabbed my mitts and a coat and ran back out. Donning both I pulled the flu pipe off the stove and shoved it hard through the jack launching it past the tent. I grabbed the handles on the fold up of the stove and carried it out of the tent.

The wind was already blowing all of the smoke clear from the tent, I gathered the stove pipe and put it with the smoking stove. The snow was coming on with a vengeance so I left it and got back in the tent closing one of the doors behind me.

I pulled the window ropes opening the back window of the tent and held tight while the last of the smoke flushed from the tent. My chest was burning from the smoke, my eyes were watering. I broke open a couple ITW Warrior wipes and washed my face and cleaned up. The tent didn't appear to be any the worse for the smoke bath, I on the other hand was a coughing wreck and freezing. I put on another base layer and a fresh pair of wool socks and burrowed up in the sleeping bags. For the first time since I'd woken I checked the time, it was only slightly after two am. I coughed again and pulled the Mountain Serape over my head and hunkered down listening to the wind scream through the trees.
Posted by Cro at 21:40