Unseasonably warm would be an understatement. It simply doesn't get this hot here very often, most of my summer has been similar to prior summers, mild to cool. In fact the average day time temps through the hottest months of summer for my area is July and August at 66 and 65 degrees, that's right, mid 60s in July and August is the average. So when  the mercury cracked into the 90s and the heat advisory went into effect I rounded up the family and headed to a small lake in the north county. I'd like to say it helped, and maybe it helped to distract us a little but the heat was dang near overwhelming to tell the truth. I know, I know, low 90s is nothing compared to most of the rest of the country but it is nearly a 30 degree move from what we are used to.

Thus we found ourselves on a small north country lake, canoes in the water and old canvas for shelter. 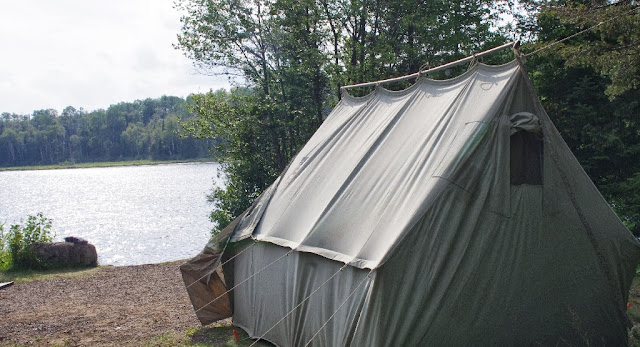 This was the view from the left rear of the old tent, which was made in Duluth Minnesota back in the mid to late 1940s. It's stamped with some of the locations it's been to, like the Annual Scout Retreat in 1956 and the Apostle Islands in 1960 to name a few. Patches in places, wearing a little thin in others, still keeping its occupants dry though, as we would all experience a strong series of storms on the first night. 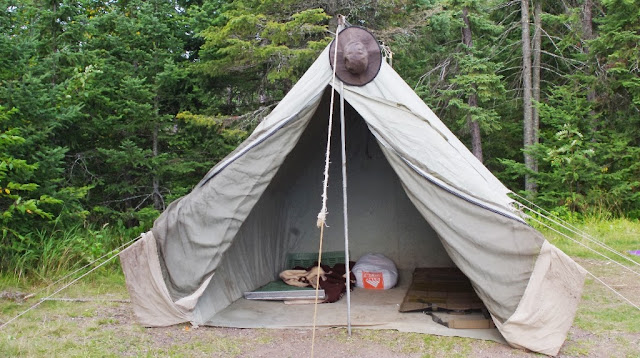 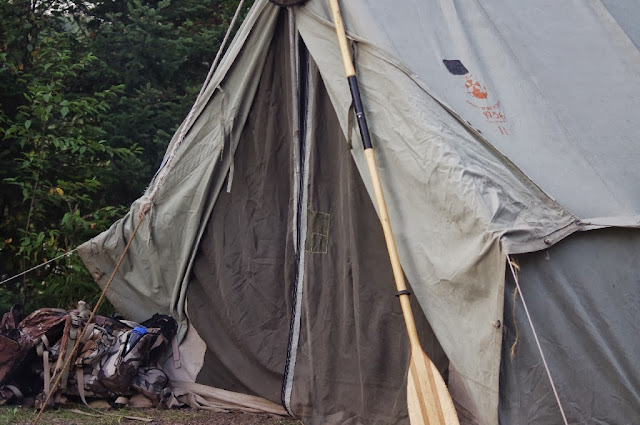 Like I said, it was hot and hot not like Minnesota hot, I mean like south east United States hot where I grew up. Just nasty humid dead air stuff, and in those conditions I knew the fish wouldn't be biting. Nonetheless the boys got the canoes in the water and paddled off to try some late afternoon angling.

My old battle worn and water weary canoe is still being paddled across the lakes of Northern Minnesota these many years later. 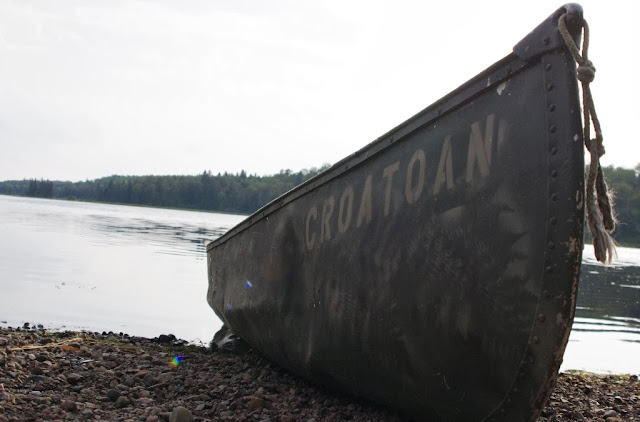 Meanwhile my youngest boy was disappointed that he couldn't see the fish he felt were or should have been there. Can't you just see the disappointment?

Well, once he'd expressed his disappointment in the lack of fish or other aquatic creatures to play with, he elected to 'sing the fish up', apparently he's more in tune with his Celtic ancestry than I am; and some ancient ability to sing the fish to shore and thus his 'singing to the fish' began. 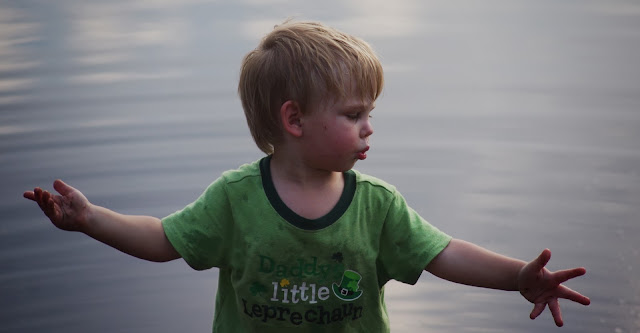 Sadly, it didn't work, or maybe it did and my ineptitude with rod and reel when my patience is lacking due to the heat resulted in dead worms but no fish. He was fine though, as he was soon distracted by a dragonfly that needed catching.

And so I put the rod away and worked on camp, getting ready for nightfall and dinner, before I did I started to notice the auto-focus drive on my camera was slipping and not hitting, it would just grind away and never find focus. Camera is pushing three years old now and I know for a fact it's had over 25,000 images taken as that's how many images are in my files since I purchased the camera, so sadly the days of this Pentax K-x might be numbered.

I finally got to bust out two of my four Coleman lanterns, ordinarily I don't pack them as I rarely camp where I have an opportunity at having such luxuries in camp. Normally I'm much lighter and more of a minimalist when it comes to camp gear. In this case I splurged and too the old '65 and the newer version out, oddly enough, the '65 puts out just as much light as the new model and consumes fuel at about the same rate it seems to me.

Of course Caiden had to assist with inspection and set up, the dragonfly long forgotten. 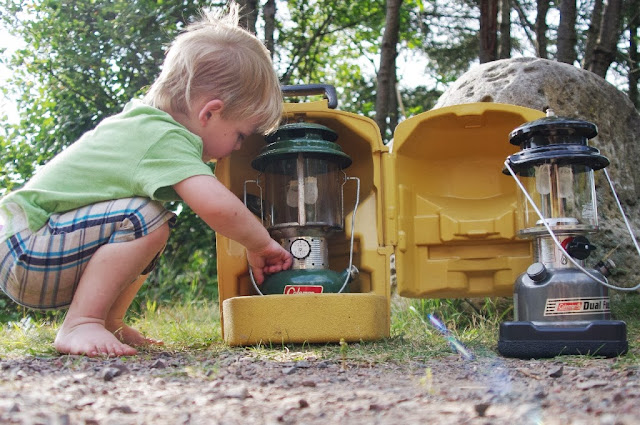 A lone loon spent most of the late afternoon and evening on the lake about a hundred and fifty yards off shore of our camp. Later in the night and early the next morning a series of loon calls fell through the little lake valley, a haunting sound that has always had an odd affect on me.

If you've never heard a loon calling take a listen to this video, it isn't mine but it is one of the best I've heard in that so many of the loon's vocalizations are heard in the short 49 seconds.

As sundown came on the lake became glass, a looking glass for the sky above. 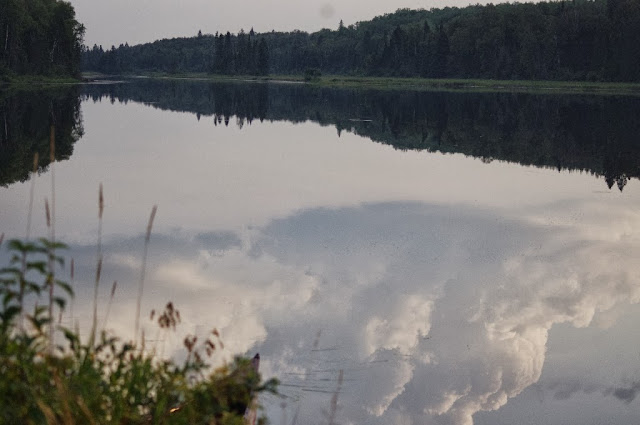 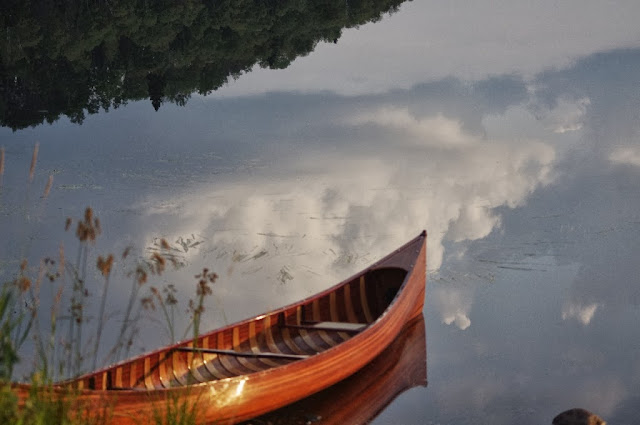 The camera at this point began to really fall down. I had the big 70-300mm lens on and I believe she just gave up. I switched back to the 28-80mm but there was only a small improvement.

Dinner was pork chops over an open fire, some foil wrapped vegetables rounding it out. No pics though, unfortunately. I did fiddle with the camera and dropped another lens size, down to the 18-55mm and got it working enough to get a few more images. A new camera now on the top of my mental list. 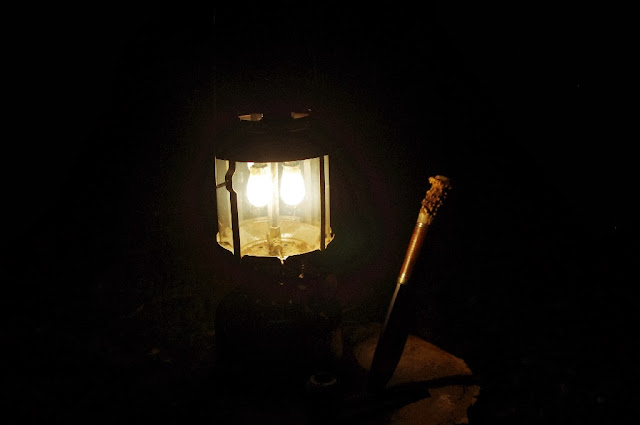 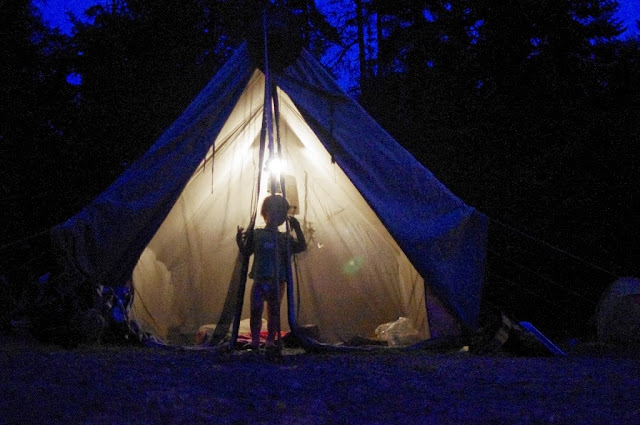 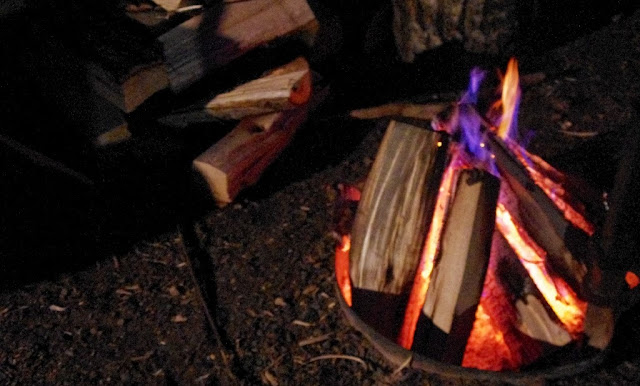 That was about it for the camera and it is a shame really, that pentax has documented much of the past three years of my outdoor life, lot of miles and memories. I couldn't get it to record either and this really bummed me out for we were treated to one of the greatest light and sound shows I have seen in the wild. The heat lightening and thunder began just as darkness settled, we could see it and hear it a long way off. About four hours after dark the lightening intensified, the wind came ripping through the pines and across the lake. A deafening roar and the storm was upon us with a vengeance. We watched from inside the old canvas tent, the front doors opened wide to receive the cool stiff wind coming off the water. There was no pause in the lightening, full dark never reached because another jagged bolt consumed the darkness leaving only white eye searing jolts. The rain came hard and fast and at times sideways, through it all that old canvas stood like some soldier on a wall, stalwart and stoic, taking in whatever was being dished out. And thus the night was spent.

The next morning I coaxed one more picture from my old Pentax, and perhaps one of her finest. The lake at peace after the night's roaring drama, fog gently rising from the warmer than air waters. A stillness fit to soothe a man's heart and soul.