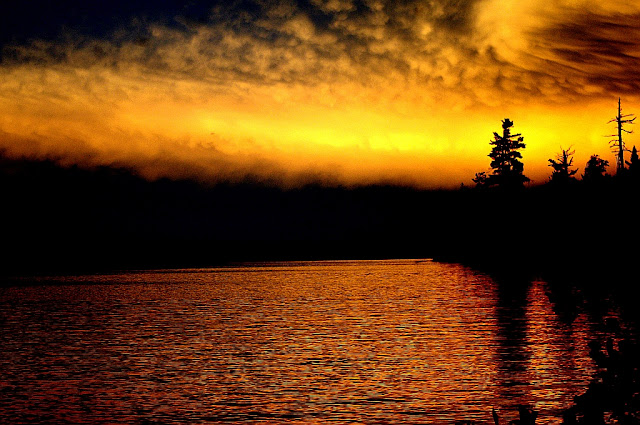 The natural world, and isn't it odd that this is a common way of referring to the out of doors? Almost as if humans live in a parallel universe of their own making, one the world of concrete and steel, the other the gilded pathways of the wood and mountain, river and lake. I guess this is a by product of the industrial and then technological revolution leading humanity down a different path, parting ways with 'the natural world'. Every year this divergence increases and because our education isn't centered on this natural world there is a growing ignorance regarding how to interact with that 'natural world' as opposed to our then by default 'artificial world'. Where once that relationship and interaction had understanding, cause and effect, and the consequences of actions there is now an expanding enigmatic view of how the wild places and how we interact with them. Philosophies have sprouted up that are not rooted in solid, real, and tangible science. It's is almost as if we've allowed the disconnect with the natural world to grow to the point that there is a schism between our day to day and the back of beyond. Emotional decisions are carried forth more often than not, science in some regards has taken a back seat and as a result we're doing damage to the very thing we believe we are protecting.

The early years of my life were spent on a homestead in rural southwest Virginia, there was no power or running water. Light was oil lamps, water was bucketed in from the creek that ran fifteen yards in front of the house. The house was situated in a valley that t-d off to the south at the base of a mountain. To the north was a large expanse of 'up' for lack of a better way to say it. It had been cut and cleared at least a hundred years prior and the fields were now hay. Behind the house to the west was a steep hill covered in thickets and briar, home to rabbits and quail. The front door faced east and the rising sun. I remember cold mornings watching that sun rise above the frost on the grass, I remember its warmth spreading through my face and chasing the chill away.

My room was a loft, to access it we climbed a old hand built wooden ladder from the front room. The square hole I climbed through was like the access door to the barn loft where hay is stored, I'm still not completely convinced that old home wasn't in fact a barn prior. The ladder was nailed to the wall, to the right was an old cast wood stove, a behemoth of a thing that sometimes glowed cherry red in the night. I still remember the smell of red oak stacked in the corner, our only defense against the freezing winter winds.

My days were spent sticking my finger in small snake holes along the creek bank, turning over rocks looking for crayfish. Chasing squirrels and rabbits with an old .410, climbing the ridges to what seemed to me to be the spine of the world. As I look back on it I cannot imagine a more enjoyable boyhood playground. It stuck with me because I've never been able to live anywhere that I didn't have access to that kind of playground.

I think part of the draw to the backwoods while rooted in my youth, is also the utterly uncomplicated nature of it. While it can be challenging, or even dangerous it isn't duplicitous, the wild doesn't possess man's seemingly innate ability to twist or turn or mislead or over complicate things. It simply 'is' yet at the same time the relationship with the wild is dynamic and ever changing. As I've learned to listen I've realized that there is an engaging conversation occurring every minute spent in 'the natural world'. The ebb and flow of the wilderness is a cycle like the tied but spanning centuries instead of a day. Sometimes it seems to me it is a massive organism so large in fact that it is beyond my mind's ability to truly understand.

In Utah there is a clonal colony of Aspen called Pando. It is a stand though that word is inadequate, of male Aspen trees that all stem from a single root structure and all are genetically identical to one another. It's a single organism that covers 43 acres. To anyone unknowing of this, each would seem to be just another tree among many that look the same. The giant banyan trees in India are the largest trees in the world.  One individual tree, due to branching propagation, covers over 19,000 square meters.

I believe man has hit the height of hubris, believing we know pretty much everything. Something about pride goeth before a fall.

I go to the wild not to pass through to another destination but rather be accompanied by the wild on a journey.  Along the way, once I stopped thinking of these journeys as time spent getting 'there', I began to see things differently. Where once there were trees there were now a tree that I saw singularly the way we see an individual person when we look. Each year I cut trees in my forest, I cut them for firewood, I cut them to open the forest floor, I cut them to improve the environment and the habitat for other trees, animals, plants and the general life within that forested area. This is not counter intuitive to someone who loves the wild places, no, it's stewardship of those places. It isn't something I just look at, or through hike, I interact with it, it improves my life and makes it possible. In return I do as I can to improve its overall health. A symbiotic relationship.

As a society I believe we are dangerously close to a line where the understanding of existing with the wild in a symbiotic manner is fading, being replaced with look but don't touch mentalities that don't really understand what they are doing. We need to return to scientific process, grasp a biological understanding, not manage from afar through emotionalism. We've been here before. At the turn of the century the US Forestry Service had a policy of fire suppression. As author Jared Diamond states in 'Collapse: How Societies Choose to Fail or Succeed...

"The U.S. Forest Service in the first decade of the 1900s adopted a policy of fire suppression (attempting to put out forest fires) for the obvious reasons that it didn't want valuable timber to go up in smoke, nor people's homes and lives to be threatened. The Forest Service's announced goal became, 'Put out every forest fire by 10:00 A.M. on the morning after the day when it is first reported.' Firefighters became much more successful at achieving that goal after World War II, thanks to the availability of firefighting planes, an expanded road system for sending in fire trucks, and improved firefighting technology. For a few decades after World War II, the annual acreage burnt decreased by 80 percent.

"That happy situation began to change in the 1980s, due to the increasing frequency of large forest fires that were essentially impossible to extinguish unless rain and low winds combined to help. People began to realize that the U.S. federal government's fire suppression policy was contributing to those big fires, and that natural fires caused by lightning had previously played an important role in maintaining forest structure. ... Take the [Montana's] Bitterroot low-altitude Ponderosa Pine forest as an example, historical records, plus counts of annual tree rings and datable fire scars on tree stumps, demonstrated that a Ponderosa Pine forest experiences a lightning-lit fire about once a decade under natural conditions (i.e., before fire suppression began around 1910 and became effective after 1945). The mature Ponderosa trees have bark two inches thick and are relatively resistant to fire, which instead burns out the understory of fire-sensitive Douglas Fir seedlings that have grown up since the last fire. But after only a decade's growth until the next fire, those seedlings are still too low for fire to spread from them into the crowns. Hence the fire remains confined to the ground and understory.  As a result, many natural Ponderosa Pine forests have a park-like appearance, with low fuel loads, big trees well spaced apart, and a relatively clear understory.

"Of course, though, loggers concentrated on removing those big, old, valuable, fire-resistant Ponderosa Pines, while fire suppression for decades let the understory fill up with Douglas Fir saplings that would in turn become valuable when full-grown. Tree densities increased from 30 to 200 trees per acre, the forest's fuel load increased by a factor of 6, and Congress repeatedly failed to appropriate money to thin out the saplings. Another human-related factor, sheep grazing in national forests, may also have played a major role by reducing understory grasses that would otherwise have fueled frequent low-intensity fires. When a fire finally does start in a sapling-choked forest, whether due to lightning or human carelessness or (regrettably often) intentional arson, the dense tall saplings may become a ladder that allows the fire to jump into the crowns. The outcome is sometimes an unstoppable inferno in which flames shoot 400 feet into the air, leap from crown to crown across wide gaps, reach temperatures of 2,000 degrees Fahrenheit, kill the tree seed bank in the soil, and may be followed by mudslides and mass erosion.

"Foresters now identify the biggest problem in managing western forests is what to do with those increased fuel loads that built up during the previous half-century of effective fire suppression. In the wetter eastern U.S., dead trees rot away more quickly than in the drier West, where more dead trees persist like giant matchsticks. In an ideal world, the Forest Service would manage and restore the forests, thin them out, and remove the dense understory by cutting or by controlled small fires. But that would cost over a thousand dollars per acre for the one hundred million acres of western U.S. forests, or a total of about $100 billion. No politician or voter wants to spend that kind of money. Even if the cost were lower, much of the public would be suspicious of such a proposal as just an excuse for resuming logging of their beautiful forest. Instead of a regular program of expenditures for maintaining our western forests in a less fire-susceptible condition, the federal government tolerates flammable forests and is forced to spend money unpredictably whenever a firefighting emergency arises: e.g., about $1.6 billion to fight the summer 2000 forest fires that burned 10,000 square miles."

Anyone whose been watching the forest fires of the past five years will tell you, it's gotten much much worse. The point is, we need to understand before we meddle, we need to know before we go down a path that might be hugely detrimental to the very things we love. Humans were not meant to live externally from the wild, believing that we are is a modern concept relatively speaking, and the further we remove ourselves from it the less we understand about it and the higher the potential cost and consequence there of. While I don't care for the idea of returning to the trees and masses of the population trying to 're-wild' themselves, we've gone way past that. No, I'd rather we look at our relationship with the wild and wilderness through objective scientific lenses tinted with wisdom, understanding, and foresight, not through wrongheaded though well intentioned emotionalism.