I leave today for the wolf hunt. I'm excited and filled with anticipation, I've been looking forward to this trip for a while now. The bad news is a few days were shaved off the trip, the good news it's to attend our annual duck hunt in Arkansas. So I'm in to the wolf hunt for five days and then a couple days in a duck blind in Arkansas, should make for a helluva week.

The early season wolf hunt in Minnesota hit quota about a week into the regular deer rifle season and thus the early season was closed. It'll take longer to hit quota in late season as most of the wolves taken in early were a matter of coincidence, a deer hunter that had a tag and a opportunity. Late season coincides with muzzle loader and trapping season though I believe I'm going to be alone for the most part. The area is very remote and takes a lot of effort to get to, guess we'll just have to wait and see.

Success rates for wolf hunts vary between 5 and 7%, so odds are not good, but this trip is about more than killing a wolf. I've been thinking about this a lot over the past several weeks. The why as much as the how has really been on my mind.

I have a lot of respect for the wolf, same as I do deer, moose, rabbits, beaver, bear, and all animals.  Because I do in fact care about all animals is why I will try to kill a wolf. I value all animals equally, none over or under the other, this to me is a balanced view and in turn I prefer to think that science and balance belong in the managing of wildlife populations. Minnesota has more wolves within its borders that all other lower 48 states combined. Go ahead and take a look at the estimated wolf populations of other western states that have wolf populations and compare.

As our wolf populations have climbed we've also saw other populations decline. We've hit a point where it is time to manage the population both for the good of the wolf and their prey. Our moose population has now hit a critically low point and some don't think they will ever recover in our lifetime. Our deer population has also been in the decline and no I do not attribute all of this to the wolf, our winters are a thing to behold, snow comes heavy, winds cut sideways, food is scarce.

My point is, if left to their own ends we'd end up with  wildlife populations out of balance, with starving wolves, fewer deer, no moose. Wolves have no natural predators other than starvation to keep their population in balance with the carrying capacity of the land they hunt. And so I will go and hunt the wolf and try to do my part to help keep balance in our wild wood. Odds are against my success but in the end the Minnesota DNR will get their quota, the wolf population will be thinned and balance restored. The controversy will continue, the debate will rage and frankly I don't care about that part anymore. If you think only with your heart no one and no amount of science can change your mind. The shameful part for those who refuse to see reality is if they had their way not only would we be out of balance here, we'd also see the starvation and decline of our wolf population along with the decimation of their prey. They do not live on sunshine and smiles don'tchaknow, they are unrepentant carnivors, much like myself...

I've gone through my gear and food lists twice, honestly I think I'm over thinking it. This isn't my first winter multi-day trip, I've done winter camping before but I can't help running through the mental obstacle course of what-ifs and do I want to take that too scenarios. We did the get the weather I thought we would. I've got about six maybe eight inches of fresh snow on the ground, temps have been quite cold for a while now, don't think we've been above freezing for several weeks now. Water is frozen, the closest lake to where I'll be is frozen as of last weekend, and frozen solid enough to walk across and it isn't small water.

All the mental acrobatics are over now, I'm loaded up and heading north. Time to put this rig on the road, all goes well I'll be posting trip reports beginning next weekend! 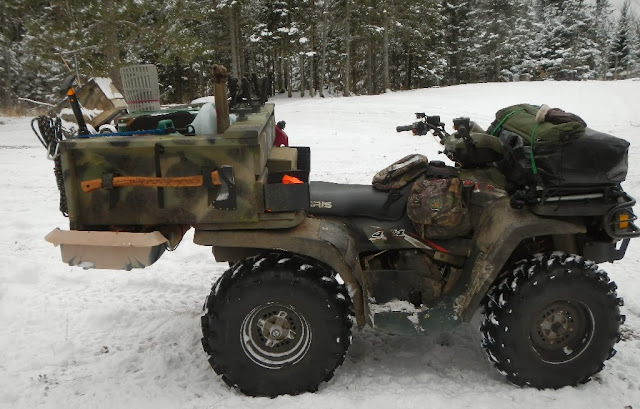