Being something of an organizational freak when it comes to keeping gear organized in kits I was happy to see the BisonGear Survival pouch on their website. I'd actually seen one of these when a friend of mine came up for a weekend of bow shooting. He was using his to carry a gear repair kit and some miscellaneous archery kit. The possibilities I recognized were endless. I guess I should also state for the record that after discovering BisonGear I've become a bit of a maniac for their products. There are good reasons for that though, not the least of which is they are designed for bowhunters and back country hunting types by bowhunters and back country hunting types. In other words people like me are at the design wheel and they come up with stuff that just plain works and is built out of materials I like in a bombproof fashion.

Here's the deal, all of my gear that I carry is broken down into this 'kit' or that 'kit', I've got a shelter kit, a hydration kit, and a fire kit, those are the top three buckets. Then there is a cook kit, a first aid kit, a tracking kit, and a field dressing kit when the seasons are in. Told ya I was a organizational freak. The point is I organize by groups, building a 'kit' for those groups and then putting them into containers/pouches/packs and so on.

The BisonGear Survival pouch measures 9.25" Wide x 6.5" Tall x 3" Deep, but that really doesn't tell you much beyond the outer size dimensions, more on that in a second. The one I have is also in Bucksuede but also comes in hemp, wool, and wolfskin. 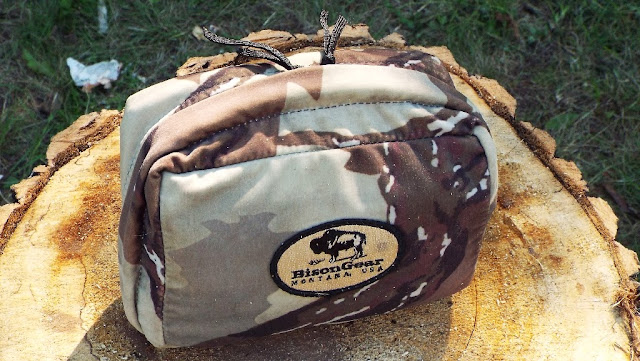 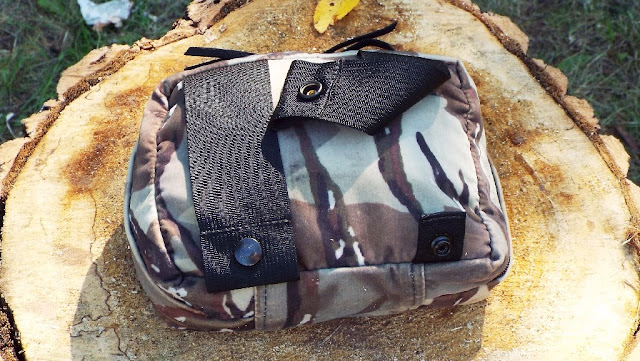 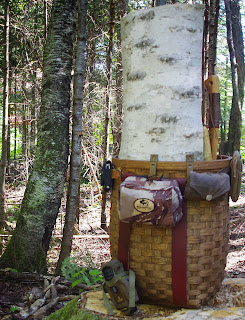 As you can see in the second image there are a pair of straps on the back with snaps. Now these were designed to be used in conjunction with a BisonGear pack with the customized waist belt but there's no reason they couldn't be used to put it on a regular belt. Or some of you may remember how I mounted it to my pack basket as seen to the right. There's a strap around the top of that basket and I just slipped the straps from the pouch behind it and snapped them shut. I had no problems with movement of accidental disconnecting, the snaps are heavy duty and I'd say highly unlikely to have them unsnap on their own.

I've also had it mounted to my Lost River pack and it carried just fine in that configuration, seen below. There is also the obvious carry method, just toss it in the pack! 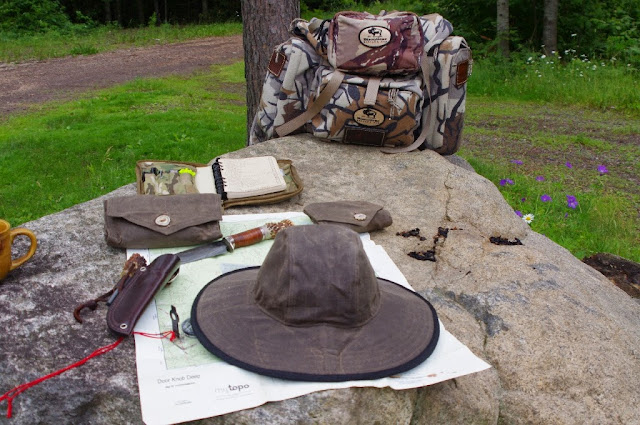 So you've got some options there for carry, in or on a pack or on your belt if you just want to grab one thing and hit the trail for example, this pouch would do that as it is roomy enough to carry quite a bit. Off to the inside!

We're coming up on the hunting seasons again and this will be carried again on all outings. I liked the pouch's layout and so I am now using it for the field dressing load-out. 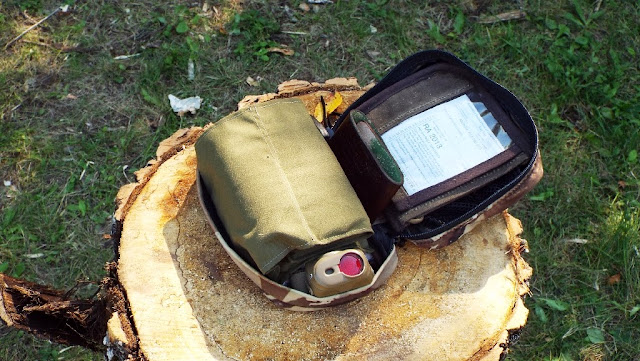 In the below you can see how the fold out works and how it is laid out with sewn slots to accommodate different sized miscellaneous items.Along with that fold out there is a pass through compartment in the center and a large mesh zippered compartment in the main lid. From left to right the notebook, warrior wipes, ruler, cordage, zip ties, hand sanitizer, Petzl headlamp, fine work knife, and hunting license are all visible and I haven't used all of the slots in the organizer. 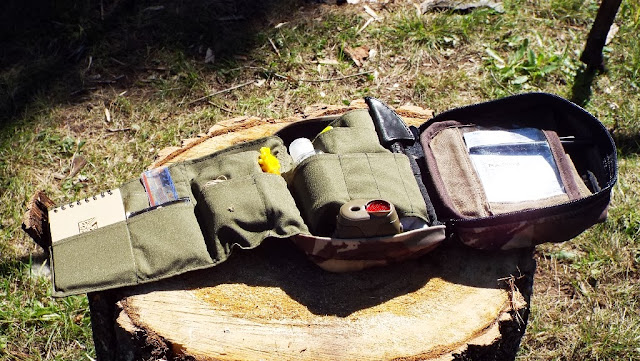 The mesh compartment is large, the zipper is high quality. I use this to hold several pair of black nitrile gloves. These are used for obvious reasons when dressing game, I also carry them in my tracking kit for handling bones or sorting scat to determine what something has been eating. In a pinch they can also be used as a water vessel and will carry quite a bit before rupturing. 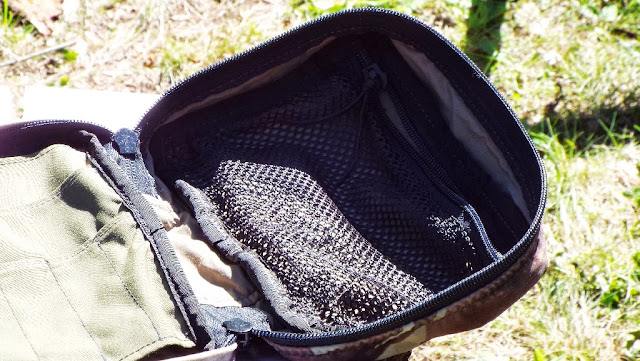 As you can see there are several slot pockets, some of pen size and others much larger. 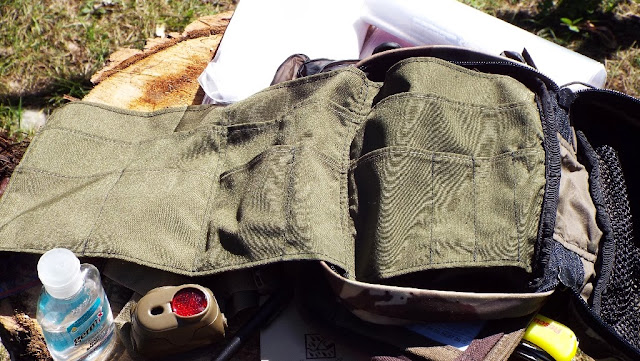 Here's what it looks like loaded up with the dressing kit. 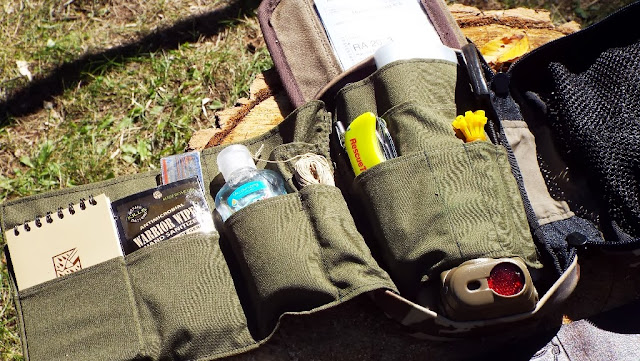 As you can see, this is where the gloves are carried in this particular configuration. 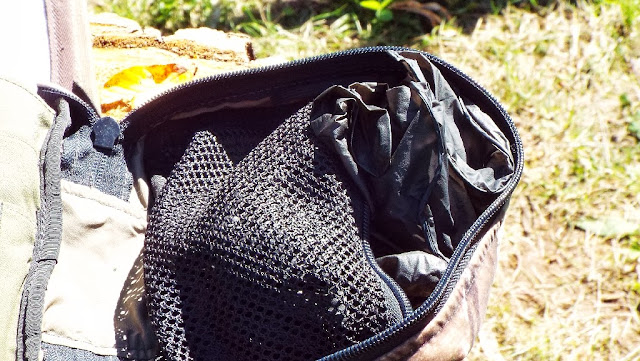 All of the junk you see below fits nicely in the pouch and it isn't stuffed, there's actually room to spare. 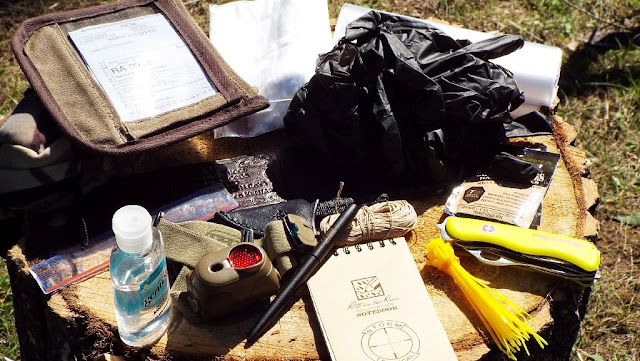 In looking at the next image you'll see the zip lock bags, this is the pass through compartment I mentioned. There are ten quart zip lock bags and a bag of wet wipes as well. I use the zip locks to bring out the heart and liver separate from everything else, or in the case of small game like grouse or rabbits if I've dressed them in the field, I'll use the bags to ferry my bounty home. 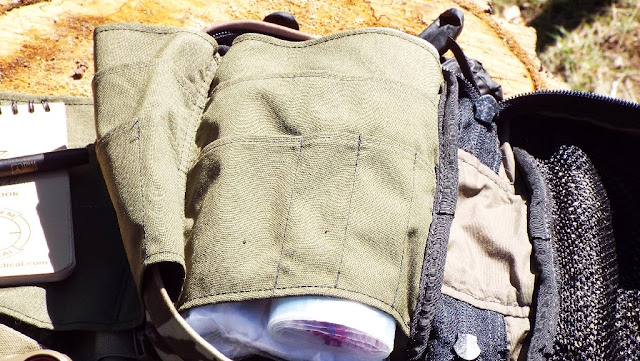 In the image below you'll notice the headlamp, this is a Petzl Tactikka XP model, super light weight and super functional. There is also a leather strop and pretty much the only thing I've found I need to carry to get a edge back to hair poppin sharp. It's flat and weighs pretty much nothing. I've got some green compound on the back side. The holes allow me to put one on a limb stub and hold the other with my finger thus keeping the strop flat and under tension in order to go through the stropping process. 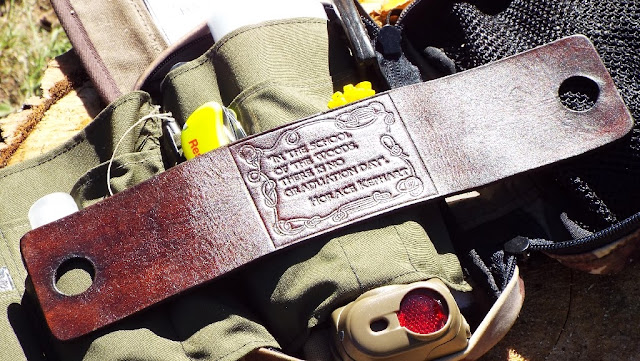 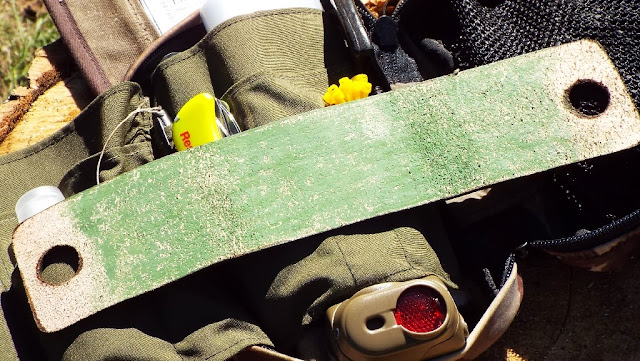 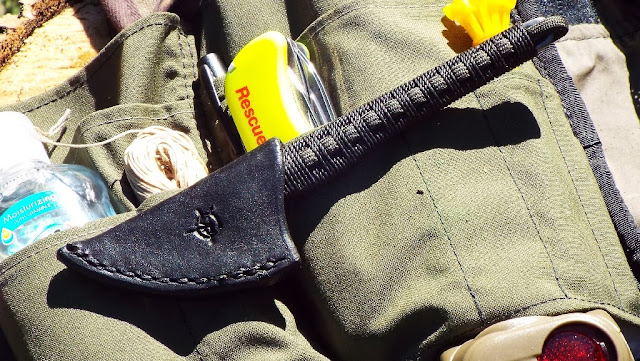 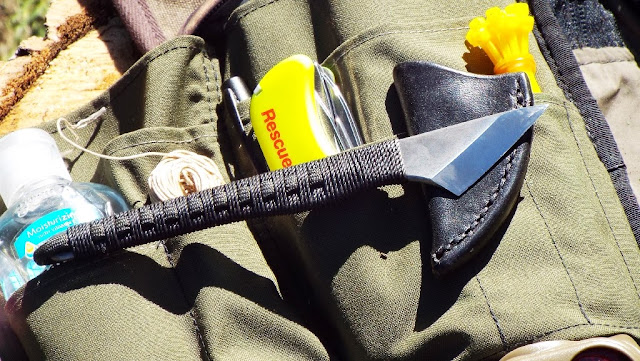 Another knife, this one has a lot of uses obviously but I've found it does a nice job during the gutting process and if I need to open the pelvis up because it does have the saw that works great. 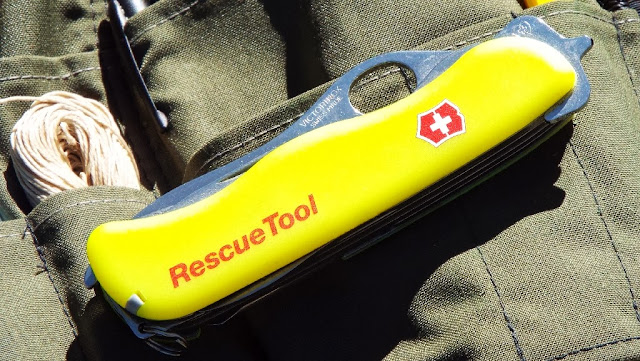 Saw blade on the left, and you'd be surprised at how well the blade on the right works to unzip a deer, that safety end and the curve to the back help keep you from puncturing things you don't want to puncture. Incidentally, the yellow zip ties are easier than using a piece of string to tie off the exit end in order to pull it back through the pelvis after the cut. I've also got some cordage as seen to the left that I use when I've got a long drag and want to close the cavity back up to prevent debris from entering the chest and abdomen area. Proper handling I've found, goes along way to excellence at the table. 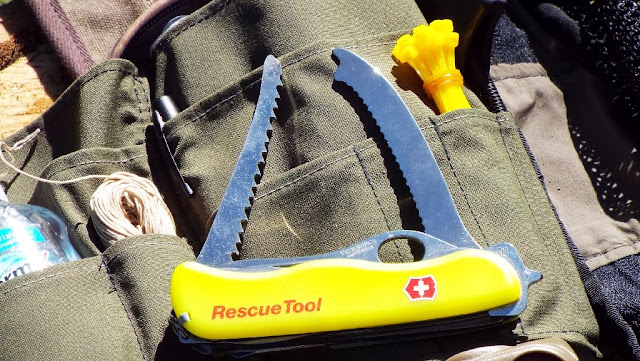 Also carry a small travel size bottle of hand sanitizer which beyond it's obvious intended use makes one heck of a fire starter if you're in a real jam, burns something fierce and for a long time. Some antimicrobial 'warrior wipes' a couple 3M steri-strip wound closures for any nicks or slices if I got careless while working. Also a notebook pen for collecting any notes that I might deem needed.  Sometimes I'll note the condition of the organs as an example, or where the broad head entered and what it did, how far the animal went and so on. 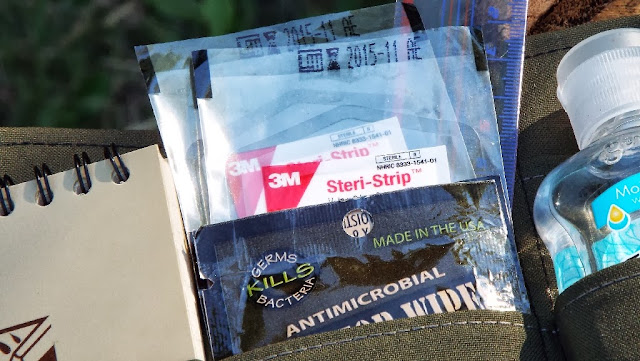 That's pretty much it for the dressing kit, it's made up of things I've found useful over the years of taking assorted meat from the backwoods and onto my table.

Previous to setting up the BG pouch for a dressing kit I had built it our as a PSK (Personal Survival Kit) and it works for that too! Here's a couple shots of what that looked like. 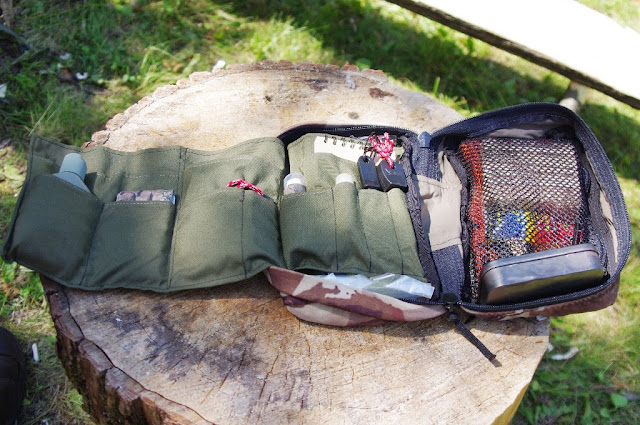 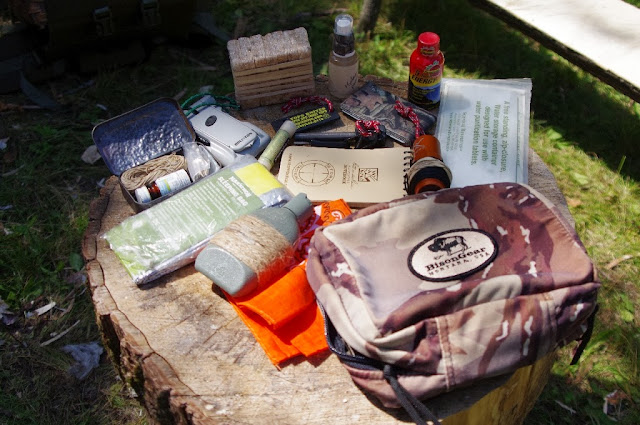 In that load-out there was enough gear and items to provide for an emergency overnight or two and not have anything else with me. As an example there's water purification, fire kit, shelter in the form of a mylar sleeping bag, 2000 calories of rations, note pad, pen, small FAK, navigation, cordage, gear repair, duck tape, emergency whistle, bandanna, more cordage, hand sanitizer, and a five hour energy drink. Like I said, it worked well at housing a PSK.

Overall the versatility and construction of this little workhorse pouch have appealed to me enough to make it a staple in my stable of organizational freak products! Once more BisonGear has put a nice little package together that delivers in many big ways.
Posted by Cro at 18:00