I spent nearly 8 hours in some form of support chat or call yesterday. A ridiculous series of escalations because the tech support at godaddy couldn't figure out an issue I was having.

Over and over again they'd come to the same conclusions which typically was to blame squarespace for a hosting issue, never mind the fact that squarespace isn't the host, godaddy is, or was.

At one point they blamed propagation issues and told me to wait 72 hours and the issue would resolve itself. Really? Even though the site had been function fine for over a year now, and only that morning developed redirection issues, it must in fact be propagation problems.

So, eventually they said they would escalate my issue to advanced troubleshooting.

I got an email this morning, screen shot below. 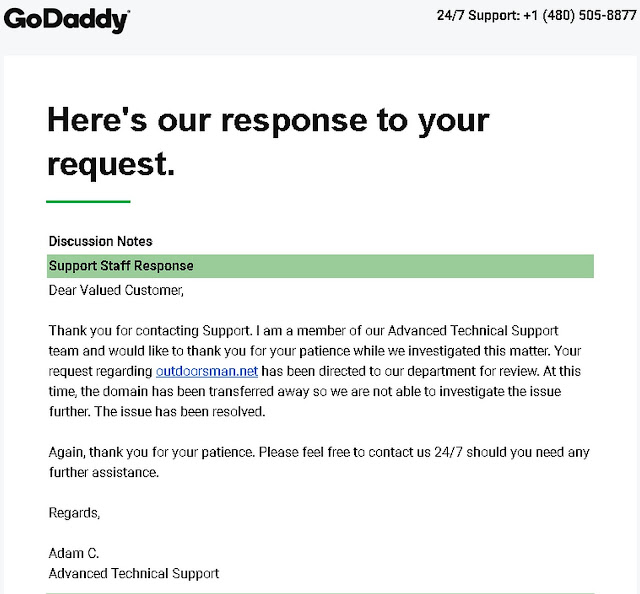 When a company begins to determine their issues are solved because they lost a customer, how long before said company implodes?

So what should they have done besides being able to resolve the issue in the 8 hours I spent trying to get the issue resolved? Were I still employed in the positions I held before I retired I'd recommend setting up a customer save team that the technical support team pitches customer to, that have elected to transfer away after a failed attempt to correct a problem. Said save team reaches out to save the customer.

At least make the effort, because patting yourself on the back for losing a customer isn't going to keep you in business in the longer term.
Posted by Cro at 09:02