After Action ~ Trip One Conclusion...

Next day I was out again before the sky had a chance to herald the dawn. Inky blackness with a crescent moon peaking through the trees. At least, I thought to myself, the skies should be clearer today as I hiked away from camp.

Having seen no tracks the day before and unwilling to invest another day in a blind without confirming sign I hiked to where the tracks should be, to the corridor I was watching from the blind. To my dismay there was nothing but deer tracks. No wolf sign to be had in any direction. I widened my search for sign in a circular pattern, ever widening out from the center of the corridor. I found no sign.

This was particular disturbing because my plan called for watching this area and calling, without sign to indicate they were in the area I felt the plan was a bust and I needed to adapt.

I did come across this though, and one of only four or so that I've ever found in the snow. Do you know what it is? There are no tracks into or out of it, only what you see in the image.

You're looking at a spot where an owl landed and deposited a pellet and a hairball. The outer edges at roughly the 730 and 130 positions are the wings as he swept them back. His tail feathers left impressions at about the 530 position.

I had to make a decision, stay and hold onto the slim hope of seeing something from the blind or strike out in search of sign. I made up my mind quickly. I'd strike out on my own and try to find some sign. I stashed the sled and blind gear and headed further north and up the hill. 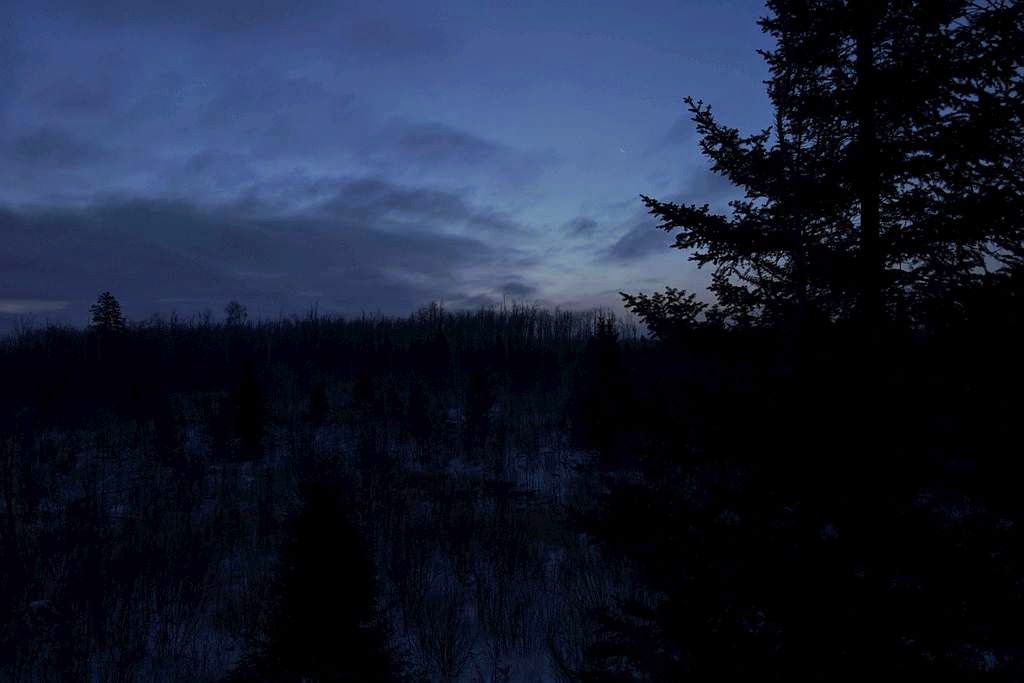 Once at the high point a positioned myself inside some pines overlooking a clearing and waited for the sun. I could see a distant tree line to the south and east and the area felt like it had some promise.

It was cold and the sun never came, dark grey became light grey and a vista rolled out before me. I could see further than I thought I'd be able to, at least to the north.

I hit the caller a few times but got no responses, nothing was moving. By 9am I was on the move again. Heading east and slightly south. A few minutes after I started moving the sun decided to bless me with some warmth and light. The scenery became less somber and I broke out the camera to take a few pictures. 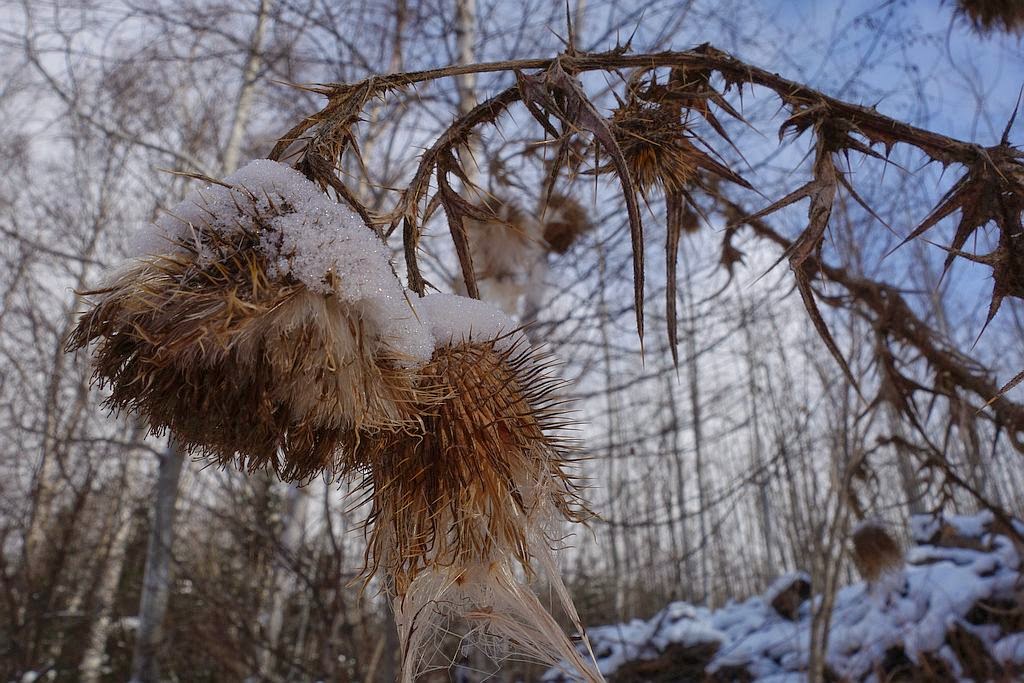 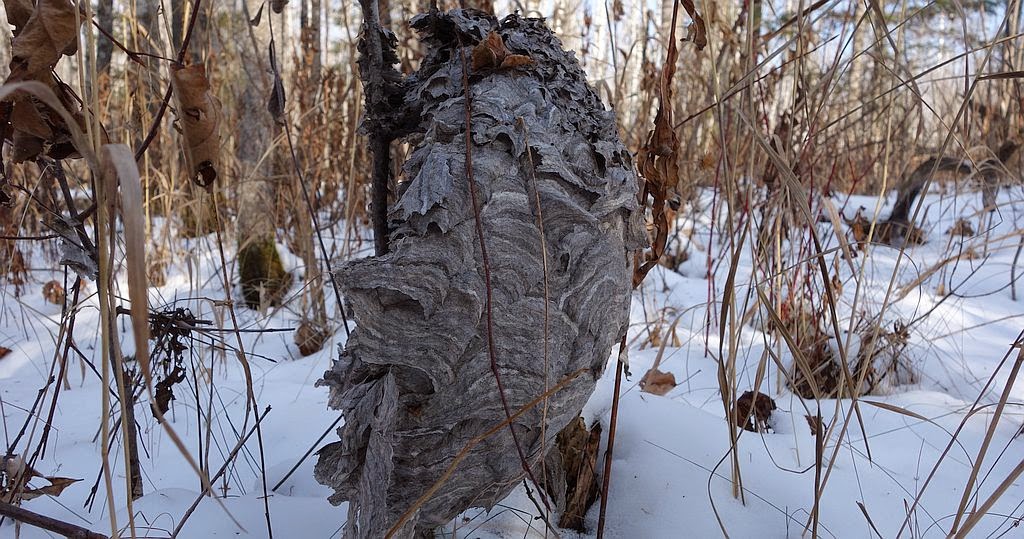 Deer sign became prolific, droppings, scrapes, rubs, definitely a buck or bucks running that ridge top. One of the rubs was massive and easily four inches across and three plus feet off the ground. Definitely a good sized buck in the area. Mental notes were being taken. Since I'd come into the area I'd not seen sign of any other human incursion. I don't believe this area gets a lot of pressure. 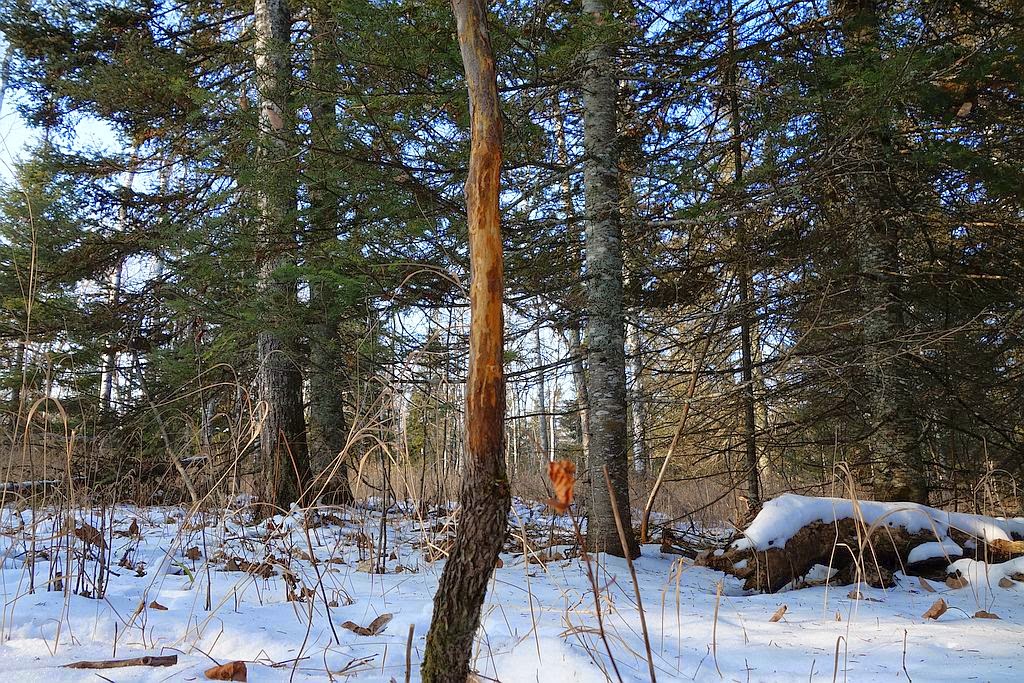 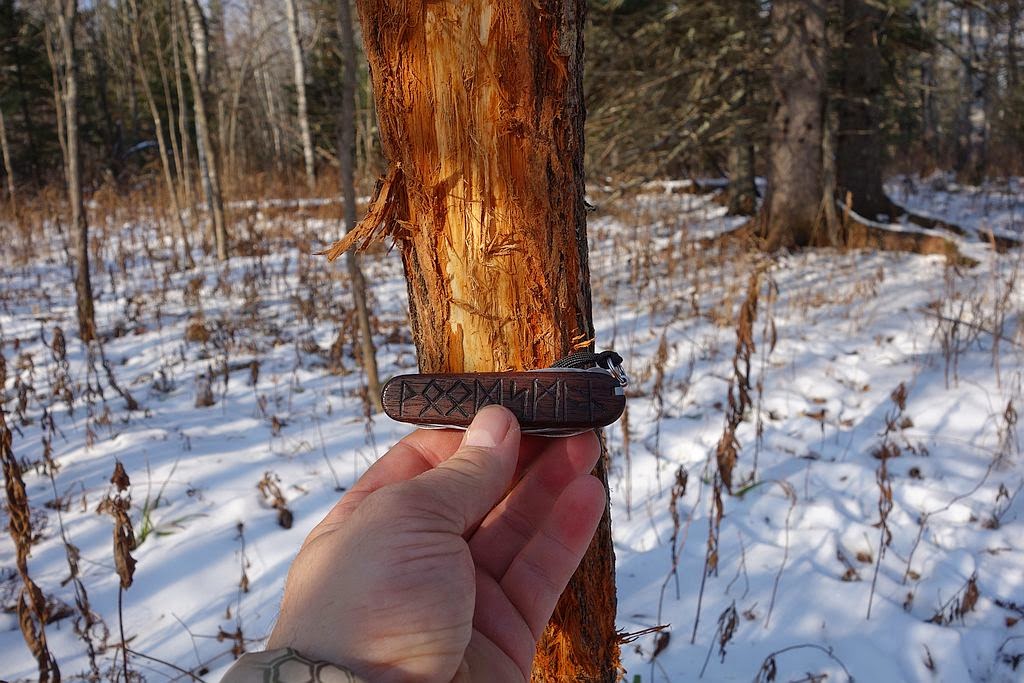 In the case of the rub below you can tell it was fresh. The rubbings are visible on the surface of the snow at the base of the sapling. 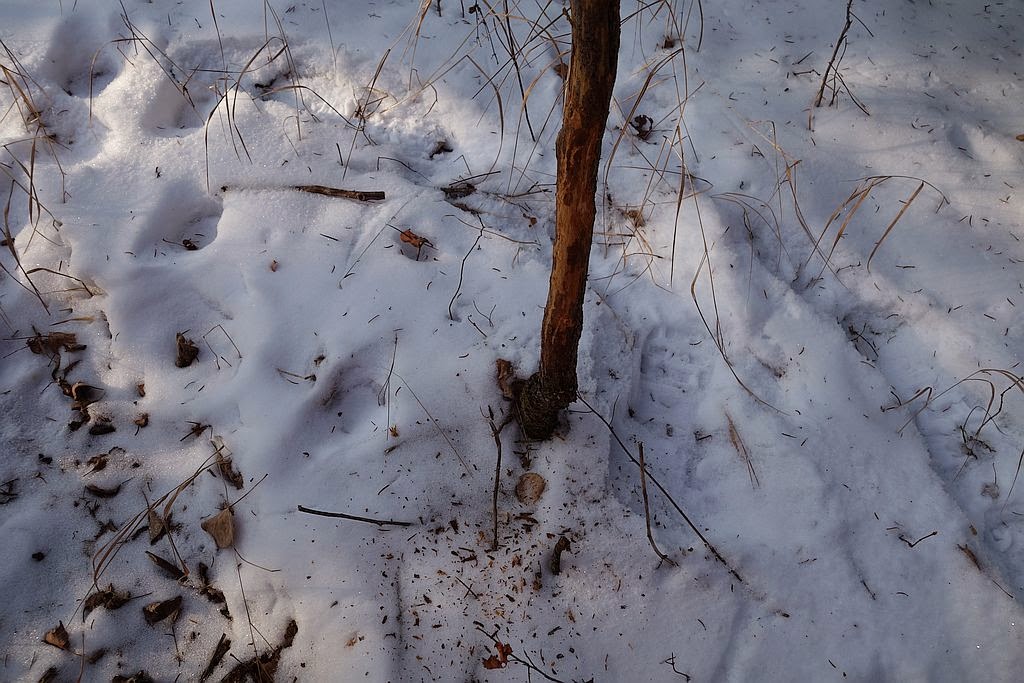 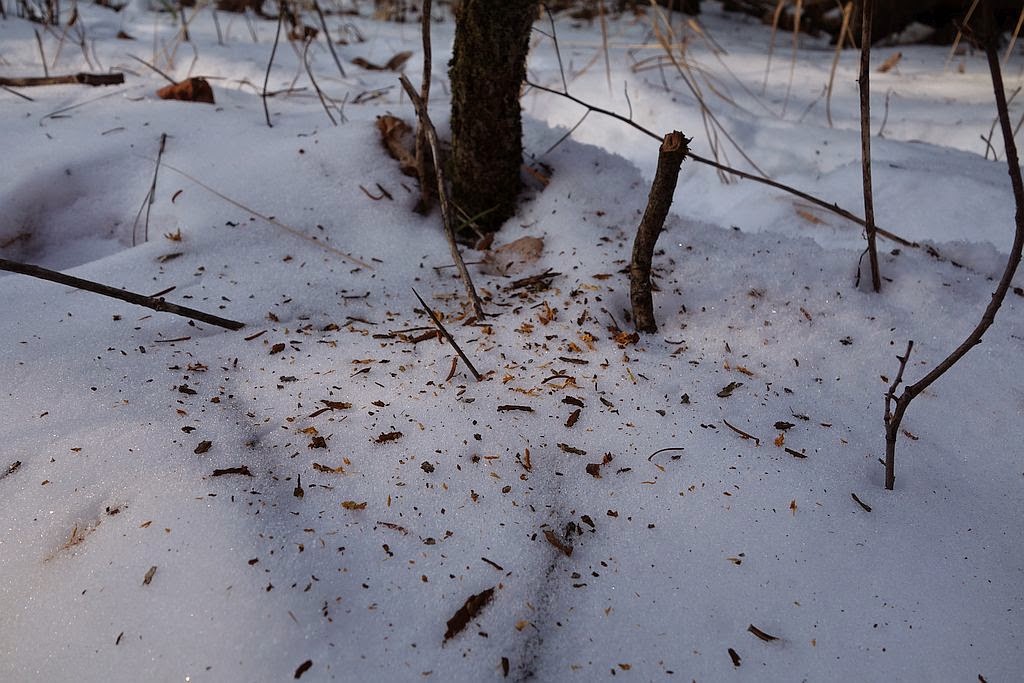 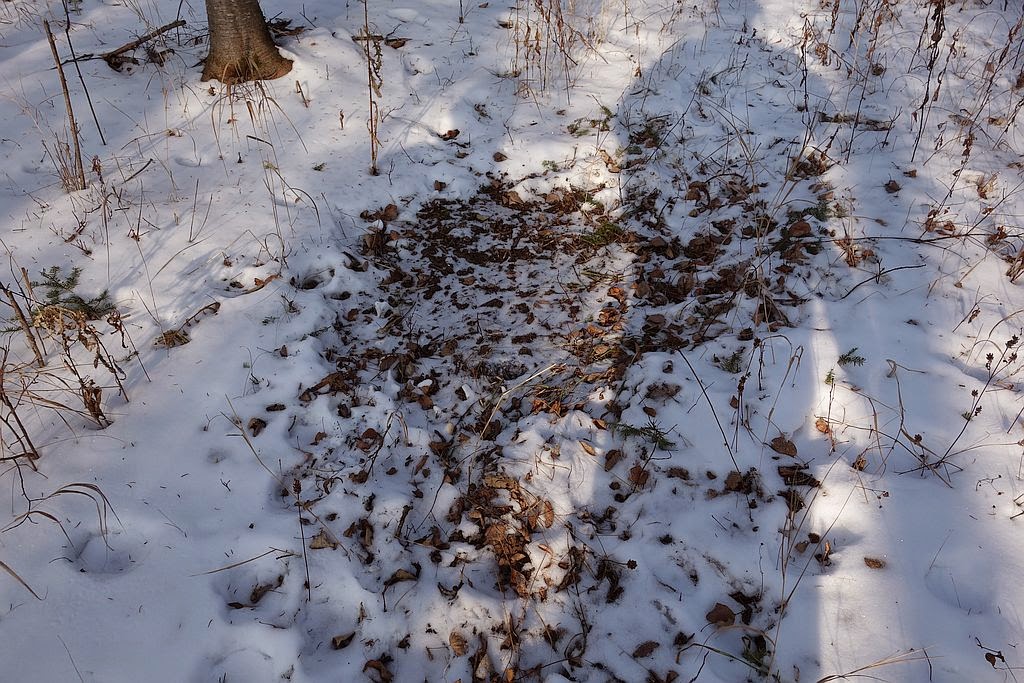 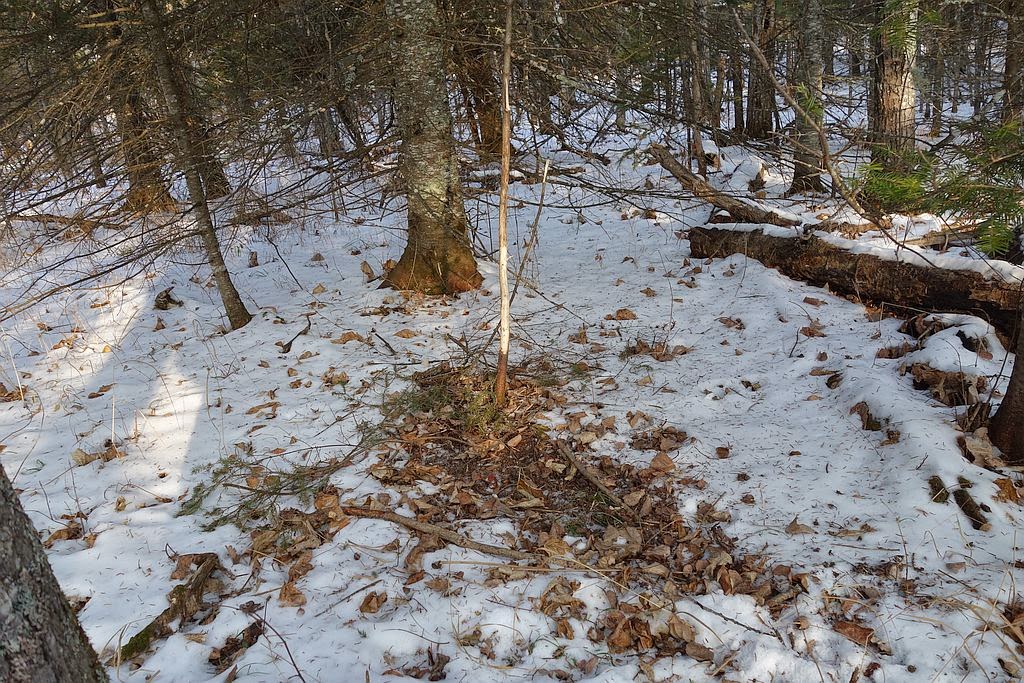 I marked the locations on my map and GPS units. While I've scouted this area prior I'd missed this sign. I'm already thinking about 2015 season...

The wind changed direction and so did I. The sun dropped back behind some clouds, clouds that seemed to be sinking, soon enveloping everything. I dropped back into the valley below to an unnamed river, crossed it carefully and headed back into the timber on the next rise. 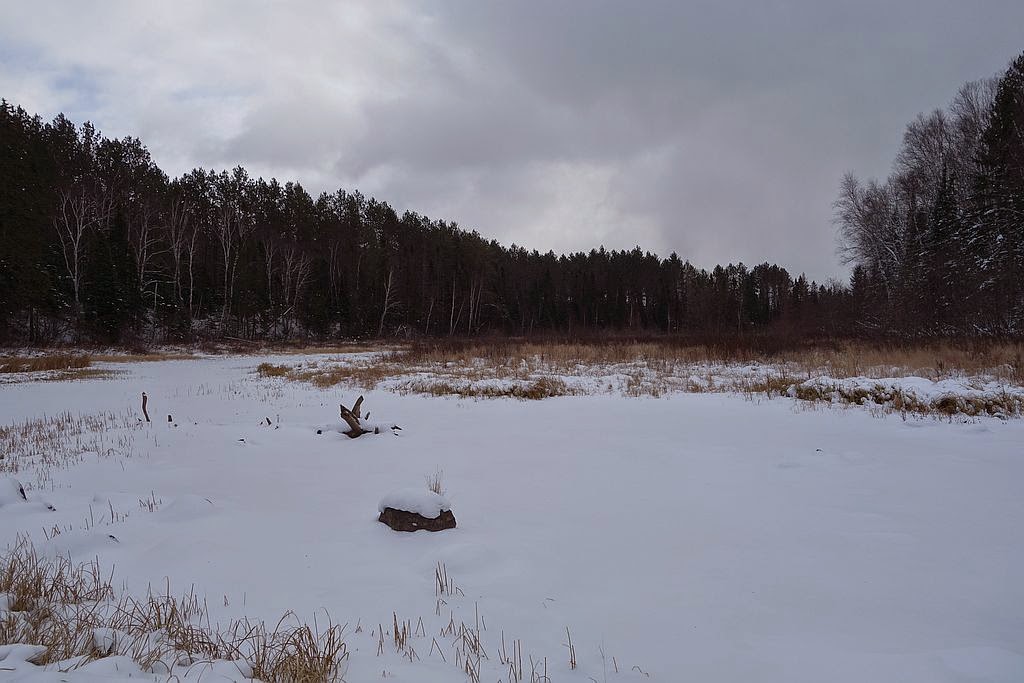 Once on the next ridge the timer changed, tall lodge pole in every direction. I drifted the timber imagining it must be similar to the Black Forest of Germany, at least it reminded me of some of the pictures I have seen of that place. Stories I'd read of wolves through the ages running through that forest came to mind.

One of the more interesting stories I've read was written by George William Reynolds, in 1846 or 1847 he published Wagner, The Wehr-Wolf. You can find it here and read it for free. It was a penny dreadful novel and I found it entertaining.

An example, while no snow on the ground the forest I found myself in was eerily similar to this, image is of the Black Forest. 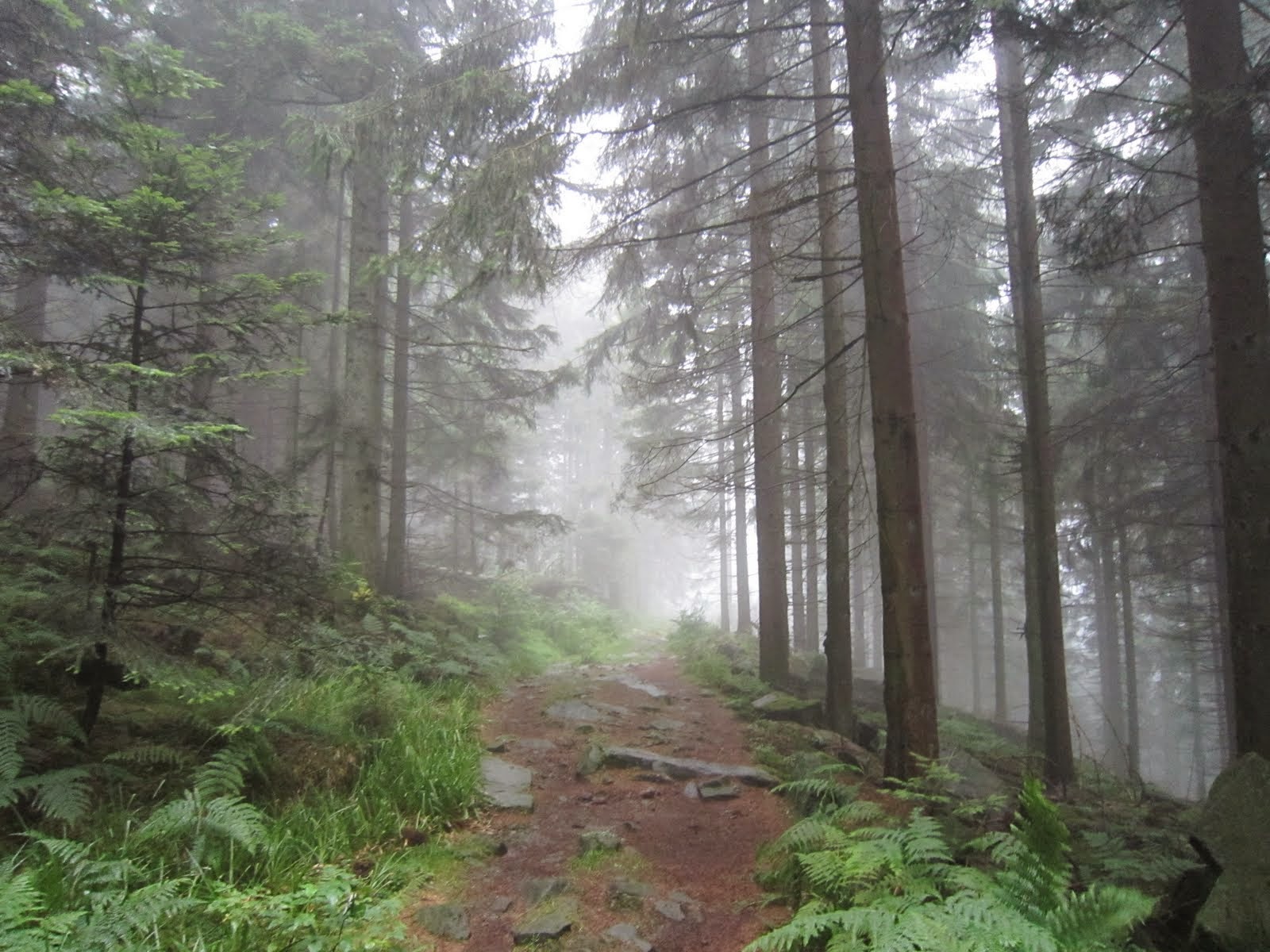 And an example of what I was walking through.

The sun struggled and fought through on occasion but as you can see, clouds were encroaching all around. 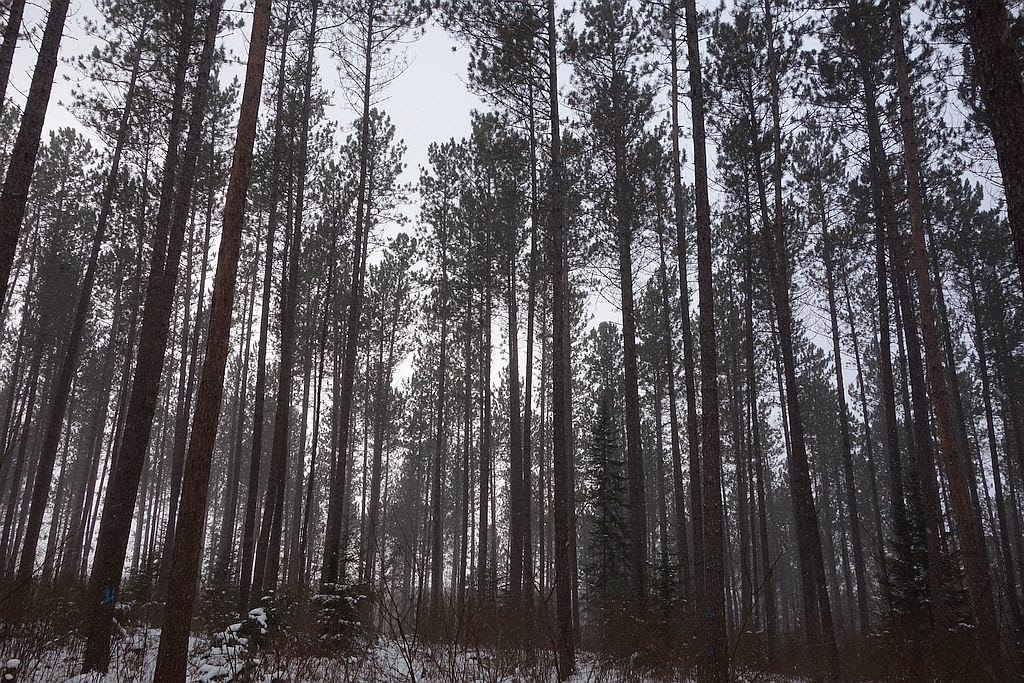 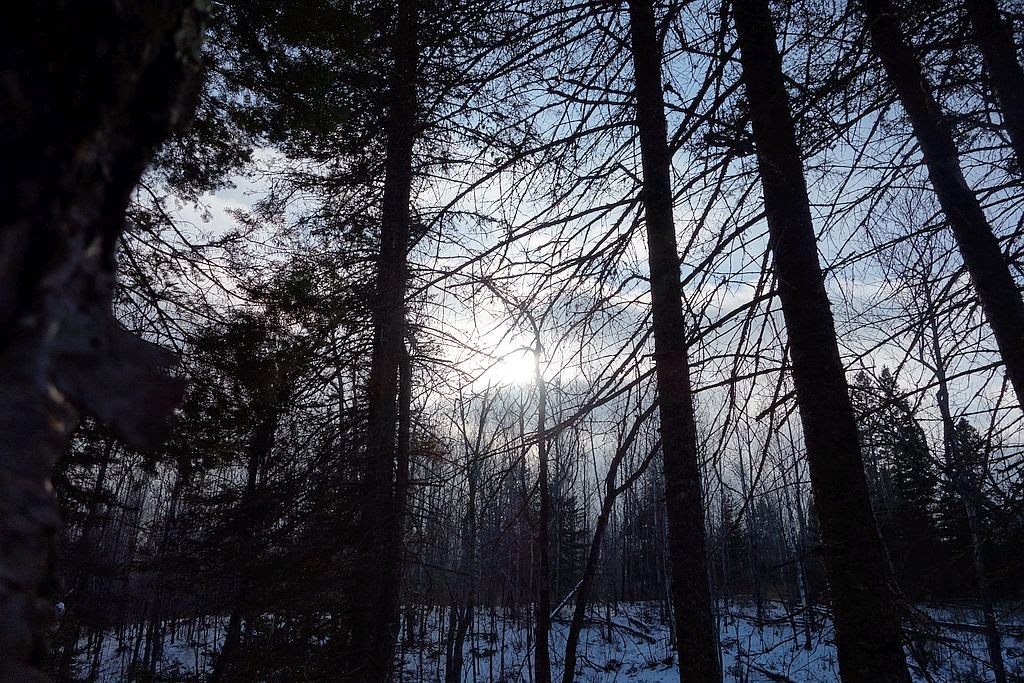 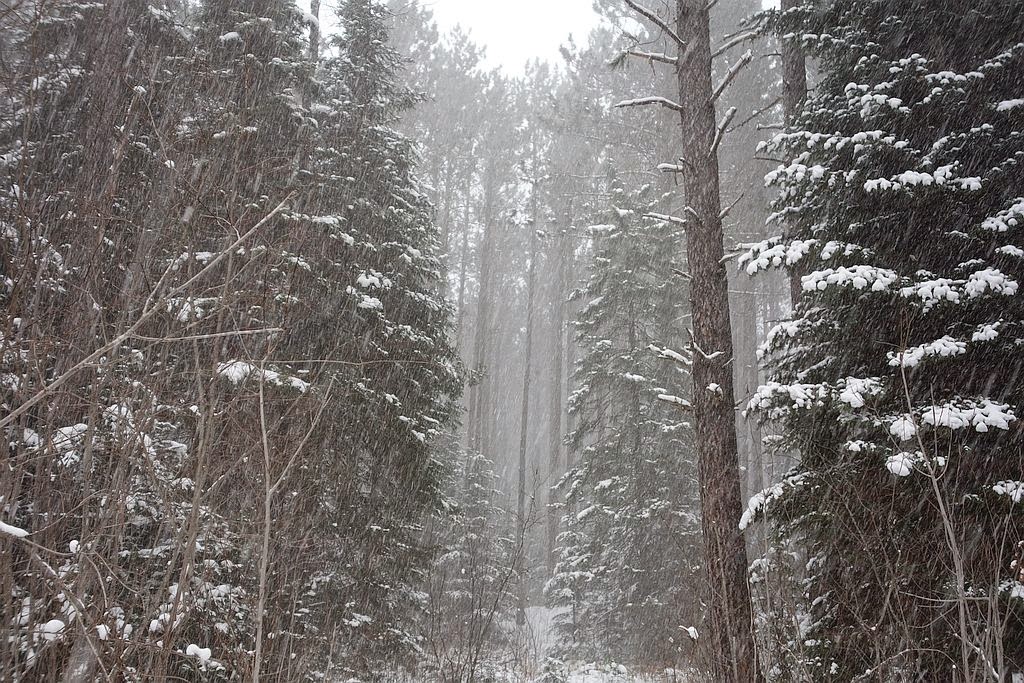 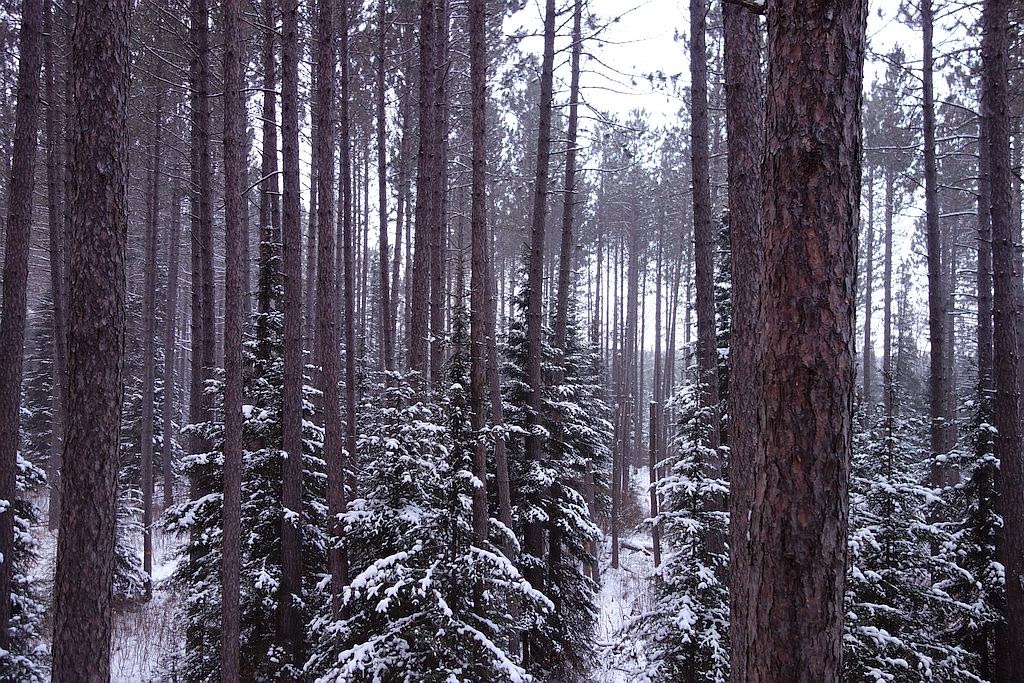 I found the terrain was changing again as I wandered down into another valley. The sun continued its battle with the clouds, sometimes winning sometimes losing. I took up a position watching the head of a valley, in the distance I could see a beaver dam and experience had shown me that the wolf pack that was in the area last year liked to use these as crossing points.

The sun won out again and I had mostly clear skies. The weather had been rather dynamic to say the least. You can see the line the beaver dam forms in the image below, this was taken by putting my camera to the eye piece of my binoculars. 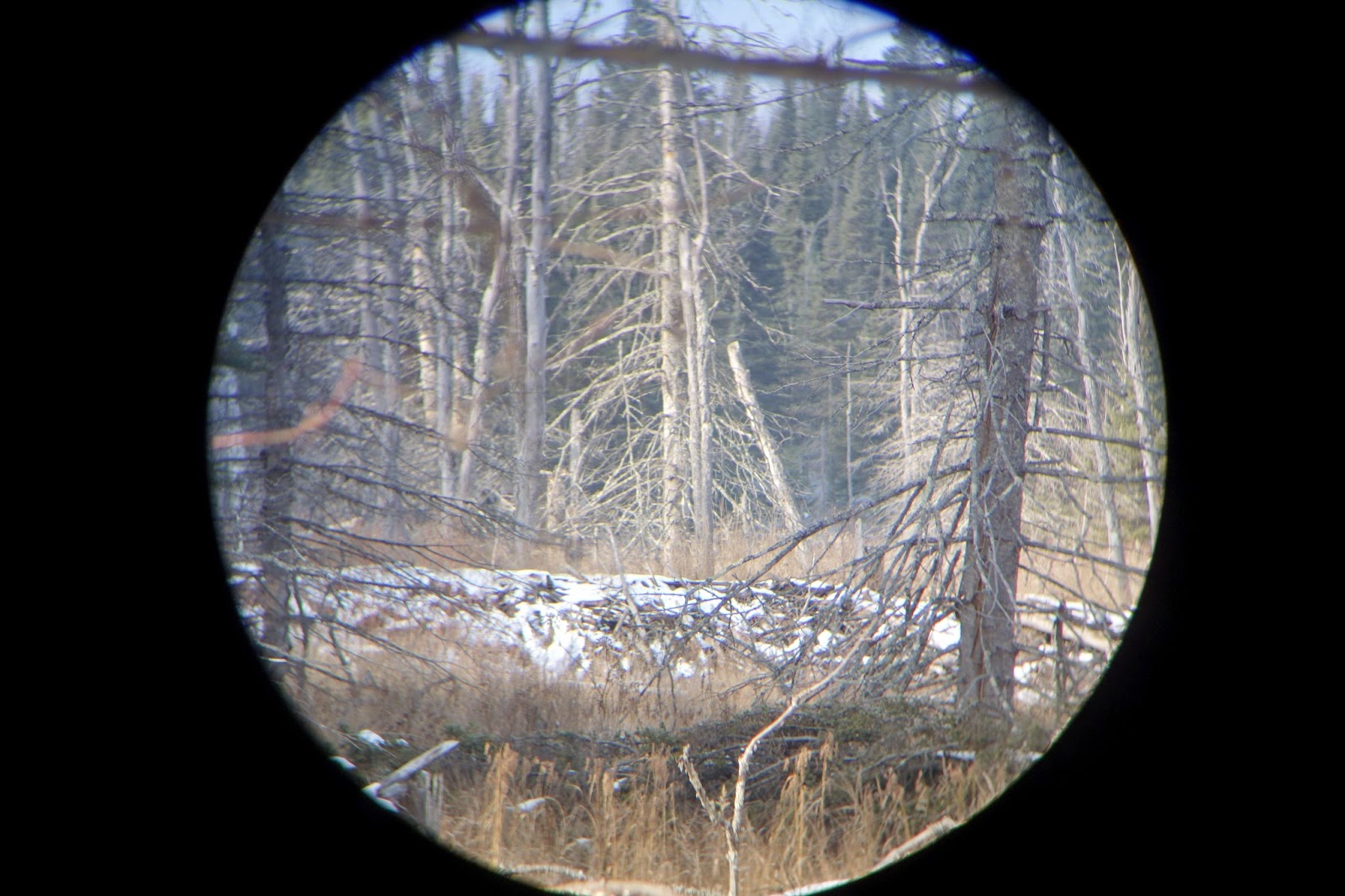 Same thing here but through the rifle scope. 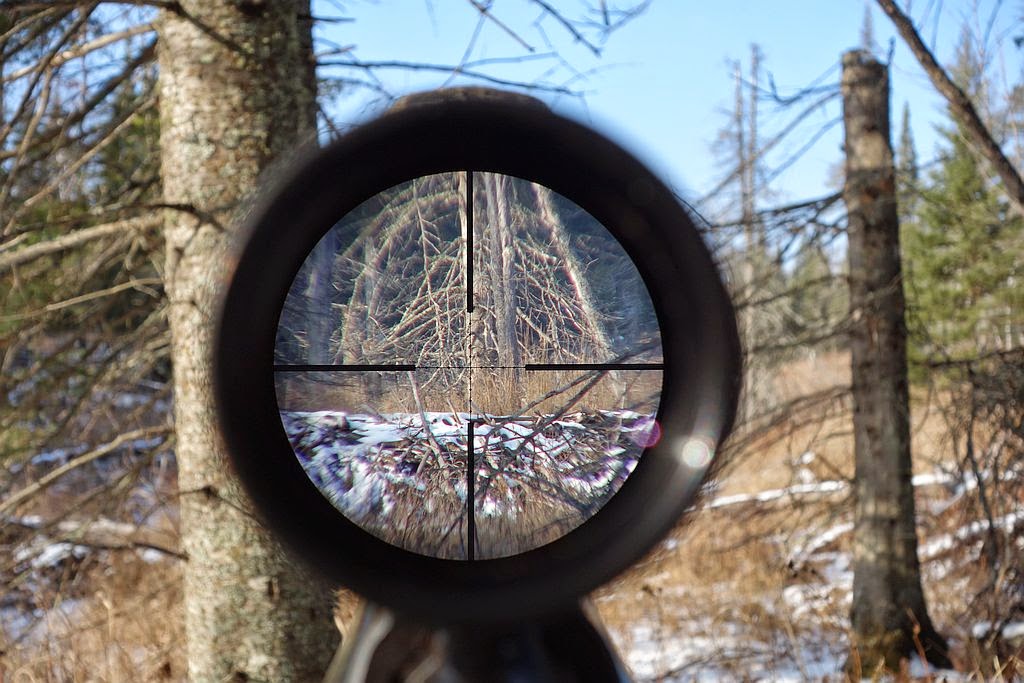 I did the usual, calling sporadically and had the same results, nothing stirred, nothing moved, nothing responded.

The single exception was the squirrel who inhabited the tree I'd picked to put my back to. He was thoroughly ticked off by my presence and made several darting moves down the tree to either spook me off or determine the threat level I presented to him. When it became clear I wasn't thieving his pine nut stash he grumbled a few more times and disappeared into the canopy. 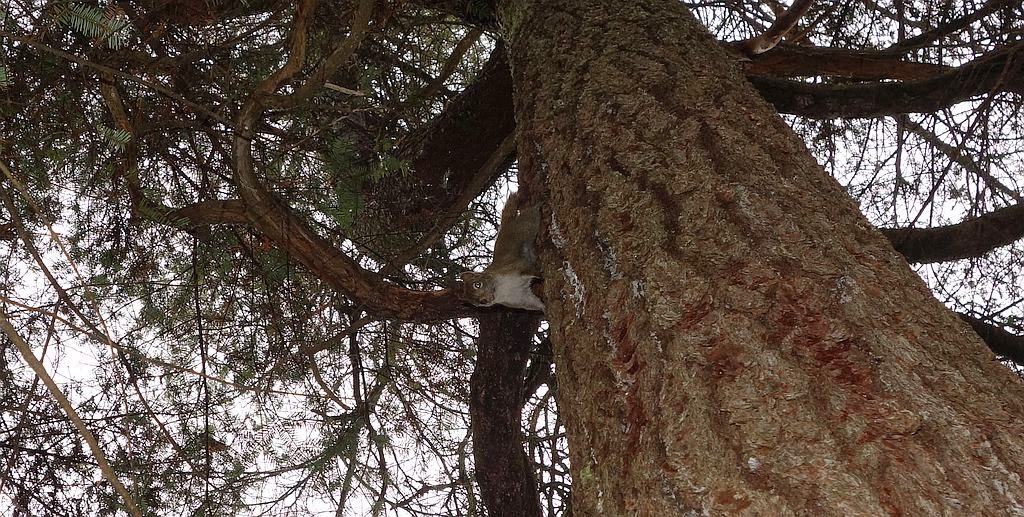 I headed back up ridge and in the general direction of camp with the intent of still hunting my way back to where I'd stashed the sled and ground blind gear. Immediately the sun fell behind the clouds and the gloominess returned, with a vengeance. 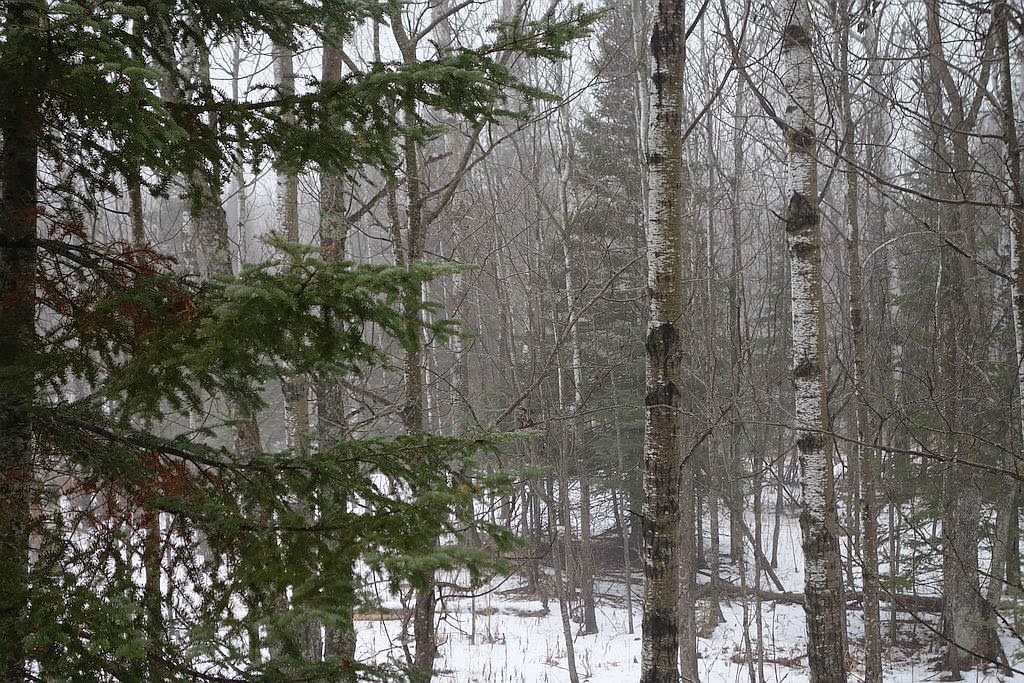 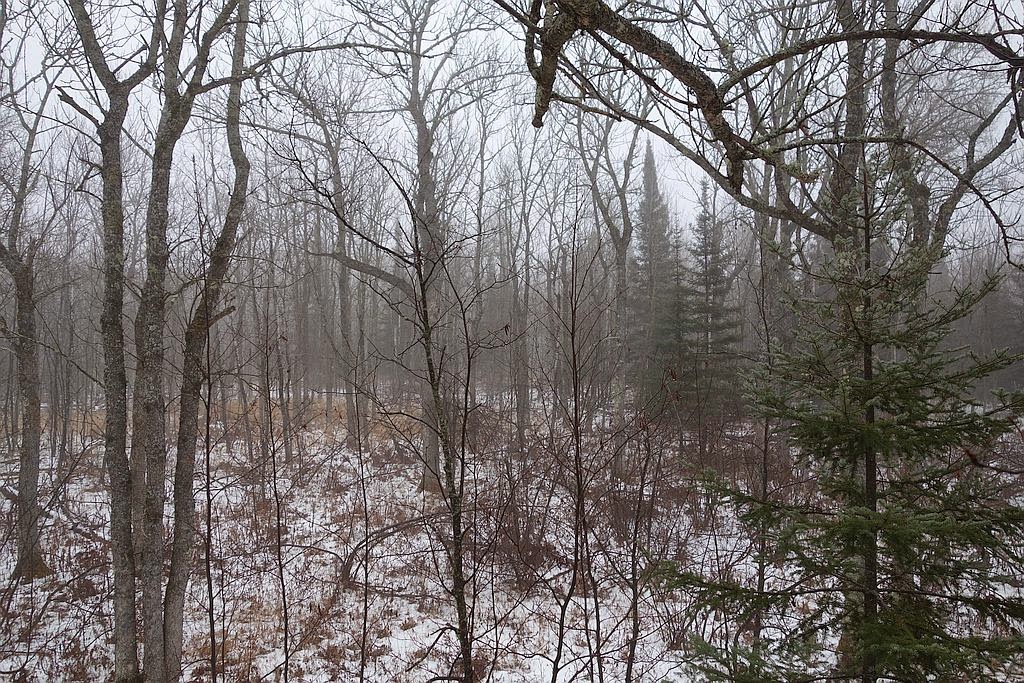 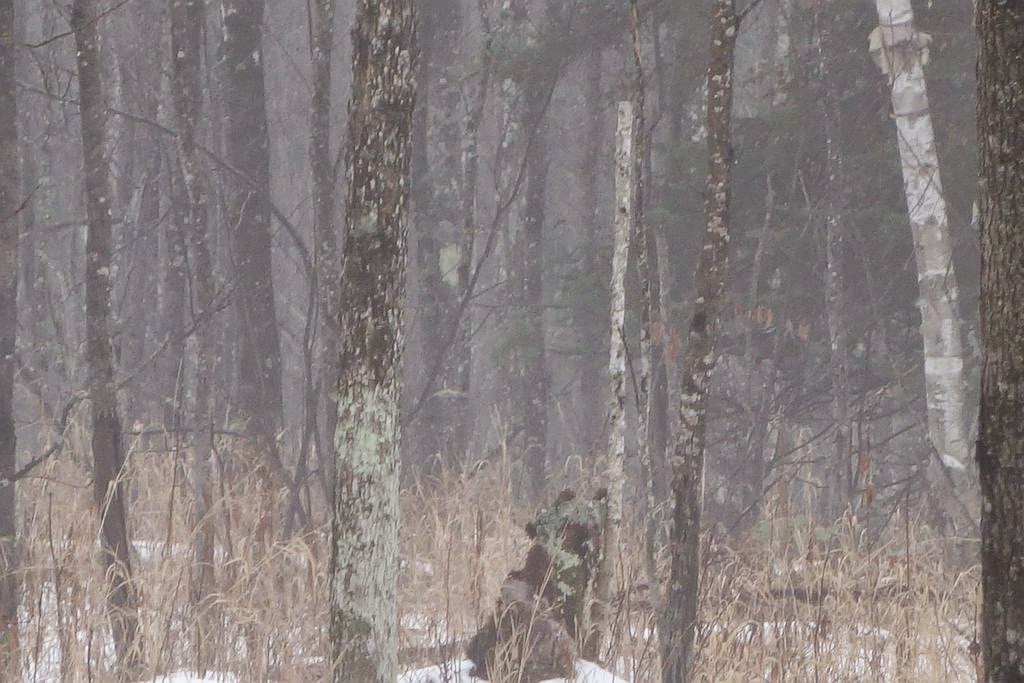 I'd covered a lot of ground and hadn't cut a single wolf track where as this time last year you couldn't take a step and not cross one. Something had definitely changed. I'm a firm believer that you have to hunt where the animals are and they were not here.

I was going to have to make a significant change and blow out of the area completely. It was the last day of the first trip, three more excursions planned but I'd have to reset and pick a new area quickly.

As I came back into camp my mind was in overdrive, I'd broken out my phone as much as I didn't want to I still had to get caught up. While the next weekend had been on deck, work had taken an unexpected turn and I was going to have to go to Philadelphia. This meant I'd have roughly eight days to figure out plan B in order to execute to it on the weekend of December 12, 13, 14.

I broke camp in the darkness, nearly mindless except for playing out possibilities in my mind. Seemingly in no time the sled was loaded and the smell and sound of a two cycle engine broke the stillness I had enjoyed for the past three days. With a biting wind I gunned the engine and headed back down the two track to the truck and the ride home.

I was both dejected and recharged. No wolf sign yet I had enjoyed the solitude of the mountains, of the weather war, of time uninterrupted, the passage of which was like cool water on a hot day. I was refreshed mentally and physically exhausted, no wolf yet but I had gotten everything else I came for.

While this concludes trip one, with luck there are three more on deck this month.