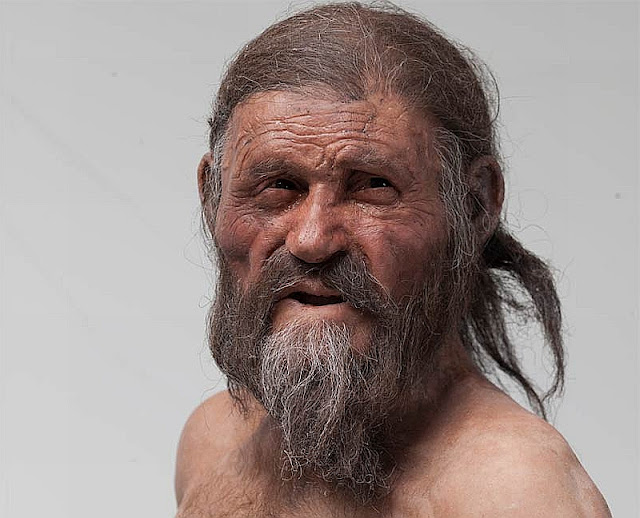 In 1991 a voice that had been silent for over five thousand years was, in a manner of speaking, heard again. During the summer snowmelt in the Otztal Alps a group of mountain hikers discovered the 5,300 year old Neolithic man who came to be known as Otzi The Iceman.

Because Otzi, his clothing, tools and miscellaneous other accoutrements were so well preserved he was able to communicate quite a bit of information to his modern day brethren. Everything from the fact that he'd been ill at least three times in the six months preceding his death, to his last meal, regular diet, age, height, weight, he had multiple tattoos that may have been an early form of acupuncture type treatment to where he grew up, where he lived and the sophistication of his clothing and tools. Pretty robust amount of information considering the source was over five thousand years old. Over the years research has added many details to his story. Scientists believe he was 46 years old, a long life for a man of that time. They've also identified the likely cause of death, blood loss as a result of an arrow wound to his left shoulder. He'd also sustained many other injuries indicative of a pretty severe attack. Even at 46 something tells me he gave as good as he got and did not go easy into that long night. 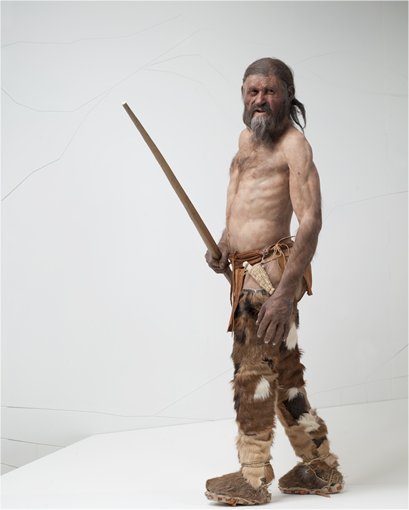 I've always been fascinated by Otzi, his life, his gear, his mystery. This man lived in a time when the world was so much different. When every single day a man was completely responsible for his own life and everything in it. His next meal, next drink, next shelter, next breath, next everything. He lived a long time for that period, or at least this is what the scientists and scholars tell us, since they've not found the remains of every single human of the time how do we know? If the bulk of the bones we've discovered happen to be on the southern side of sixty then that's what the evidence shows I guess, though I have to wonder if it's just a case of not having enough evidence to really know. Happens to be that my opinion is most scientists are so full of their own self confidence there is little room for open minded thinking. Hell, just have an honest look at the land bridge theory for the populating of North America if you need an example of "there can be only one way". Never mind the fact that we've got archeological evidence putting man in North America much much earlier that the bogus land bridge theory presents. I digress.

Otzi had many things in his possession at the time of his demise. Possessions that I think his attackers would have taken if they'd known where he was. See there's been some debate if he died on the spot of the attack or if he escaped only to pass on over hours or days later. I'm not a 'educated' type but I can tell you that I might know a thing or two about human nature. I'd venture a guess that with limited resources in a very rugged world you wouldn't leave easy pickins on the ground.

Otzi died with his possessions intact for the most part. This to me indicated he had escaped his attackers, thought the arrow wound to the shoulder was inescapable in the end. Among the list of items, a flint blade knife, a copper axe, a quiver of arrows, and a bow. Though it's believed the bow wasn't finished. Two of the fourteen arrows were broken, though they were tipped and had fletchings. The remaining twelve arrows were not finished. This seems a little odd to me, if the bow wasn't finished, then either the two finished arrows that were broken were for an earlier bow, or, the bow he had was finished but our learned scientists were not able to figure that out. There were likely other items that were lost to us before Otzi's discovery in 1991 though speculation has filled in some blanks. 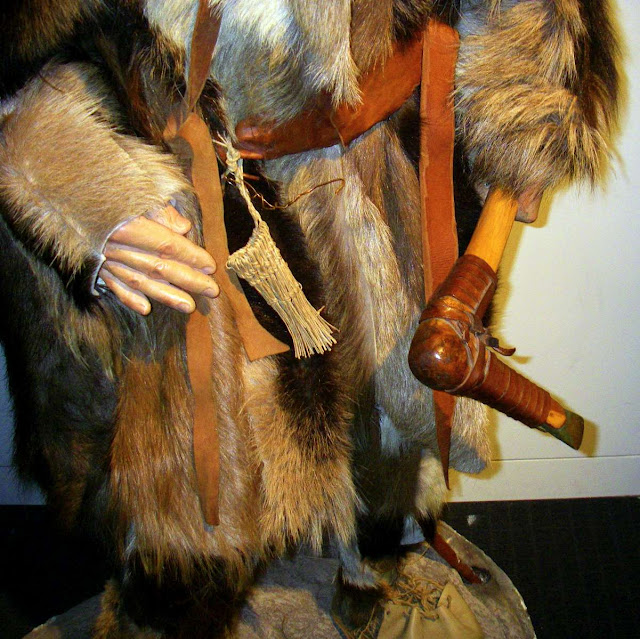 In addition, he had a couple birch bark baskets, berries, two species of polypore mushrooms that had leather strings through them. One of these, birch fungus is known to have antibacterial properties and was probably used for medicinal purposes and the other was a type of tinder fungus. It was commonly called hoof fungus or tinder conk, and it was included with part of a fire starting kit.

In my own opinion this is where speculation has gone a little far. While it is true he had what appeared to be a kit with very many different types of plant fibers and what might have been the mechanisms for making a fire this cannot be proven out. I think there are some things missing from what has been found. A lot of things could have gone missing in a 5000 year span after all, while he was discovered during a snowmelt in 1991 by hikers, who is to say he hadn't been exposed above the ice multiple times over the years? Many items that he may have had might have been lost. Though I don't think that items were removed by humans, if this were the case I'd expect that things like his axe would have been taken, among other items. 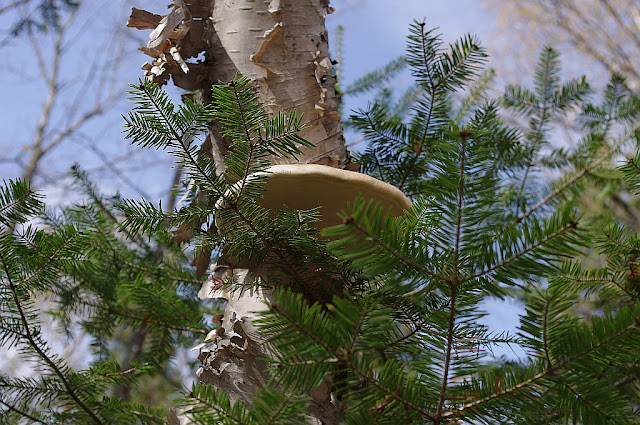 Birch Polypore as seen above, sometimes called Razor Strop fungus as it can indeed be used as a strop to sharpen knives. It also has antiseptic properties,  I've cut thin strips out of these to be used as improvised band-aids. With the antiseptic properties it is sort of like a modern band-aid with some Neosporin to boot. Otzi knew then, what most people today with modern reference materials and the omnipotent internet do not know. 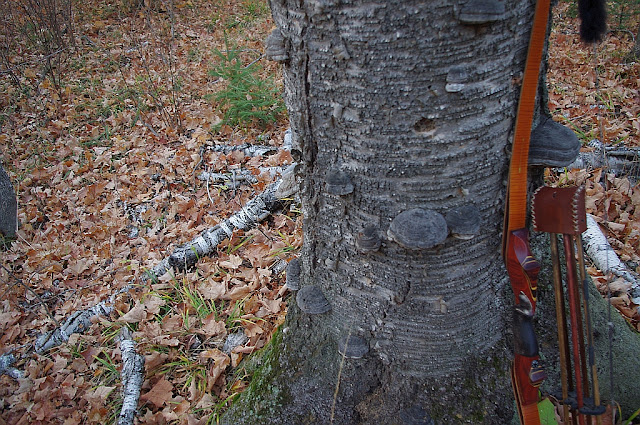 Hoof fungus as seen above, also known as tinder fungus, and tinder conk, and after the discovery of Otzi it also became know as Ice Man Fungus. No kidding. Otzi was carrying four pieces at the time of his death.

I've liked the simple nature of Otzi's knife since the first time I saw it. It has a used utilitarian look to it that just well, looks right. I liked it enough to have a modern rendition made.

I contacted Matt over at MP Knives about another knife, a special knife. A modern interpretation of Otzi's knife. In typical Matt fashion the turn around time was incredible, less than thirty days in fact, from concept to finished product. His interpretation of what I wanted was perfect. It's just over five inches long overall, the steel is 1095 high carbon and the knife is a full tang hidden but not a stick tang. Should be more than strong enough for the blade length, to do anything I'd ask it too. Very functional blade that's also pretty sweet to look at.

Whether or not Otzi would carry this knife I cannot say for certain, though I imagine he would. It isn't an exact replica, rather just a modern envisioning of it I suppose. It is fully functional and highly artistic if I do say so myself. Again more than pleased with Matt was able to do. It might be a little tough to see in the images but Matt laid in some symbols that are Sumerian Cuniform, the oldest known written language. They represent "gin ki", meaning "to walk earth." Sumerian script is believed to originate around 3000bc, roughly the same time that Otzi lived.

I'm still on the road so all I have are the pictures that Matt took, once I get some time I'll certainly be posting more about this. From the looks of things so far, I'm very happy with the way it turned out.

You'll be seeing more of this beauty in the future! 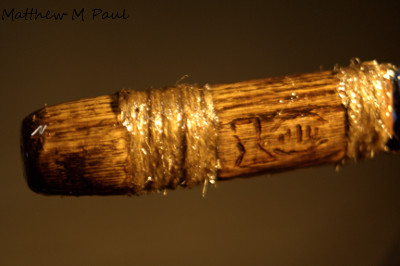 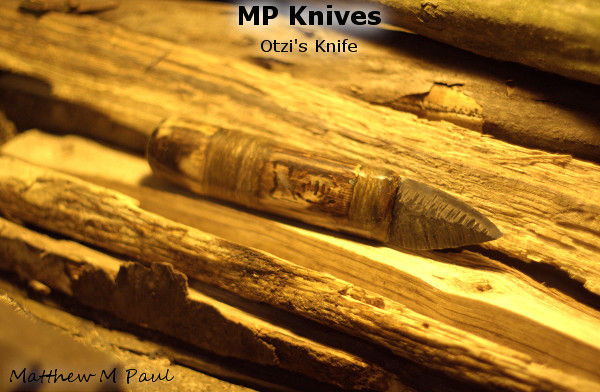 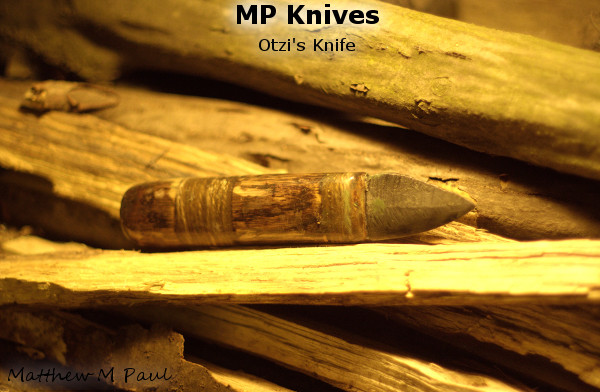 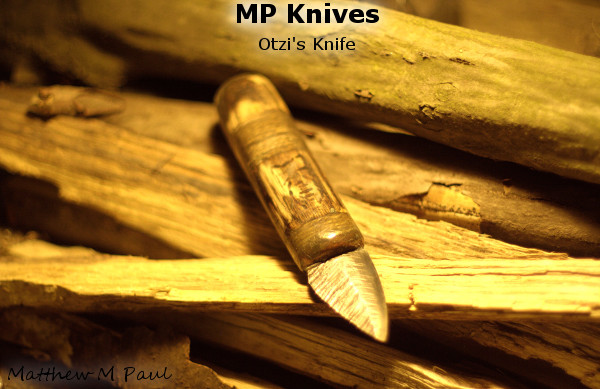 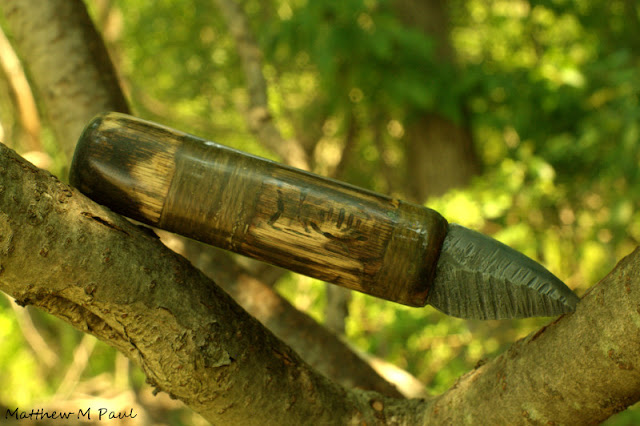