The Kitchen ~ Behind Enemy Lines ~

I've been married twenty years and still cannot navigate my wife's kitchen safely or efficiently. Sometimes I would swear she rearranges, moves the contents of cabinets and drawers on a weekly if not daily basis, nothing ever seems to be in the same place twice! Then there is the fact that the whole thing is booby-trapped, I am not kidding. I have to deal with IFDs and DTLs if I want to do something in the kitchen. She's 5'5" and sometimes doesn't get the higher items exactly where they should be so that when I open something I'm often hit in the head by the improvised falling device (IFDs), then there is fact that I often pick things up by the lid or top of the vessel/jar/container. Ever picked a three pound pickle jar up only to discover in slow motion horror that the lid wasn't quite tight, the echoing "NO-O-O-O" as the jar smashes into the floor? yea, she didn't tighten the lid, (DTLs). Now she would say, "I can't believe after twenty years you still pick things up by the lid!" To which I would reply, "I can't believe after twenty years you still don't tighten lids!". we really do have a wonderful relationship.

I try to make it a point of cooking on her birthday and today is her birthday. This year I decided to go about it differently. I committed myself to a tactical exercise where I drop myself behind enemy lines, into a HOT LZ if you will, where I will pack in everything I need, use my equipment exclusively and then bug out when it's over.

Go time is at 1700, I needed supplies and I needed them fast. I had previously decided on my killer beef & vegetable soup so I needed some fresh vegetables and some prime stew beef. Off to market.

Supplies and gear stowed in my Maxpedition Gearslinger Kodiak pack. Kitted out with IFAK- E&E kit- multiple illumination devices and enough edges to cut my way out of Cambodia. 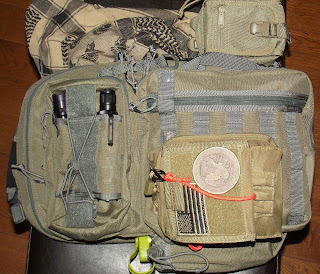 Insertion Time 1700 Hours
In the LZ covertly, you'd think I just HALO'd in as no one knew I was behind the line. Breaking out the tools needed I started with my optimal tactical medium speed moderate drag cutting board and placed the tools I would be using on it. Of course I took the time to take a tactical picture or two! My selection on weaponry was primarily related to recent acquisitions and happened to have already been in the bag. 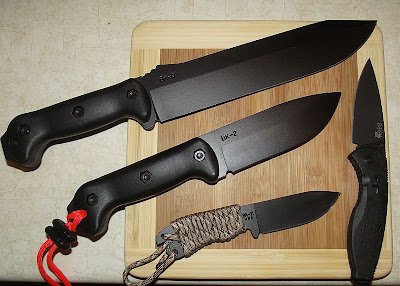 Not wasting time I set to work, quickly slicing through the attack onions, knowing I had only a small window of opportunity to avoid their wicked tear gas I put the big BK9 into action. 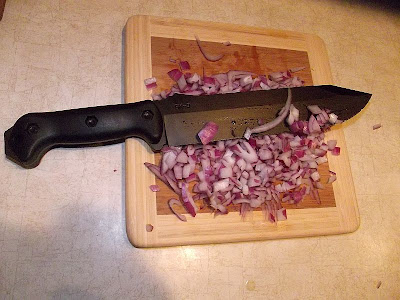 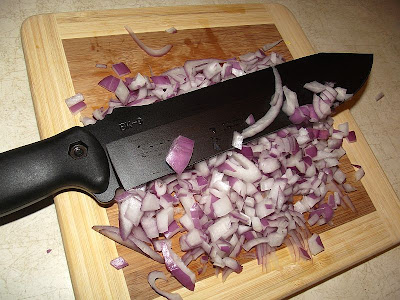 The big Becker made short work of the onions, Ginsu Madman Trophy earned.

Rolling into the shadow dwelling 'shrooms I used an assortment of edges. The Becker Necker worked wonderfully, the BK2 not so much. The blade was extremely sharp but the edged pry bar was just a little over the top for the work at hand. Strangely enough the big BK9 being somewhat slimmer proved to be a great slicer here as well. 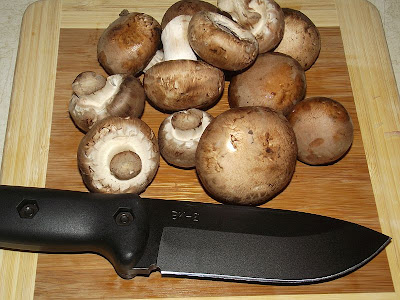 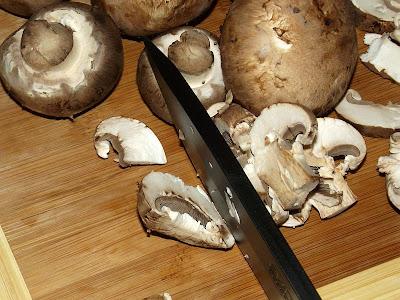 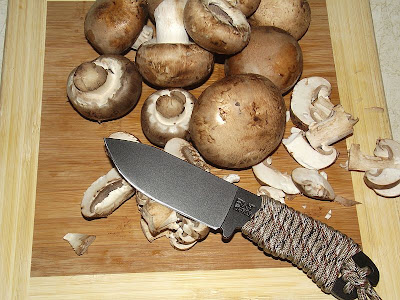 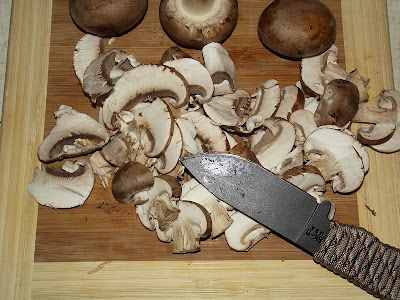 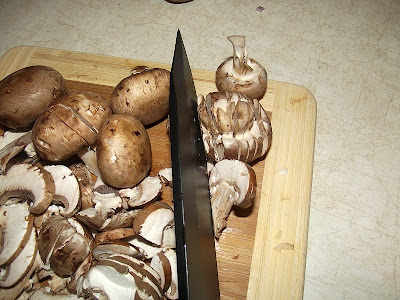 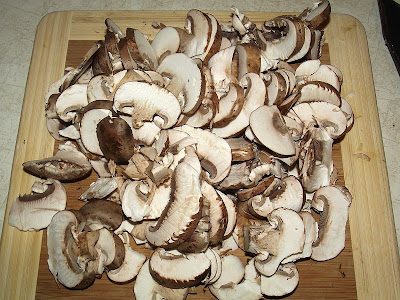 Moving well at this point, ahead of schedule I started in on the pepper patrol. Again it was the Becker Necker and the BK9 on the front line. 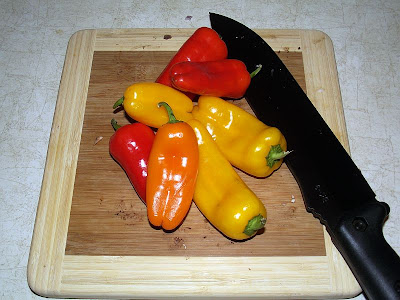 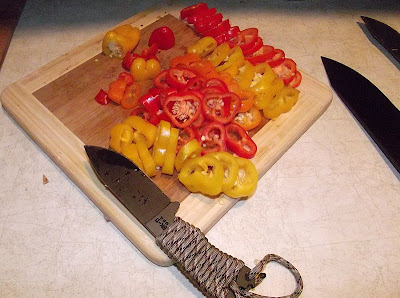 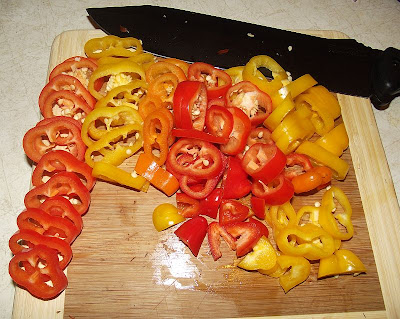 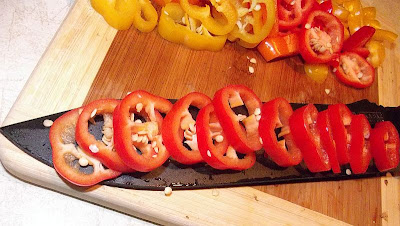 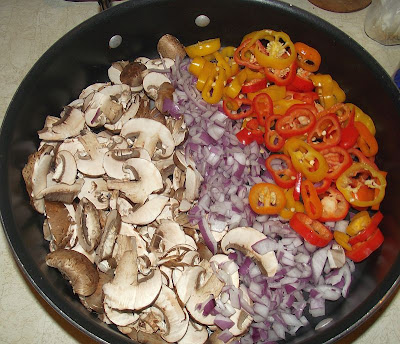 Time to cut the silent stalkers down to bite sizes! 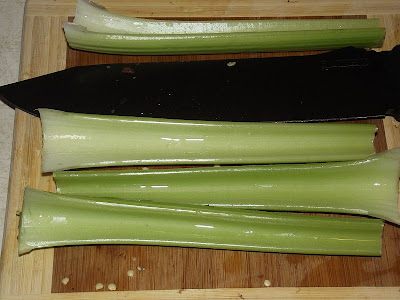 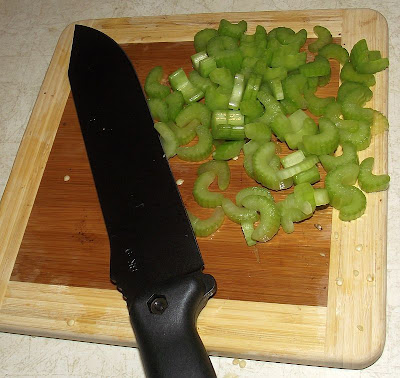 Forgoing all the edges but the BK9 we went head first into the remaining tangos. 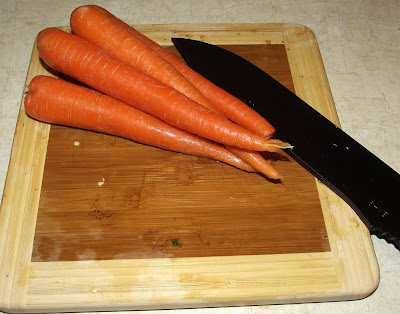 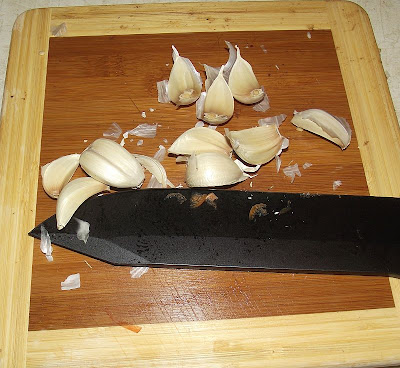 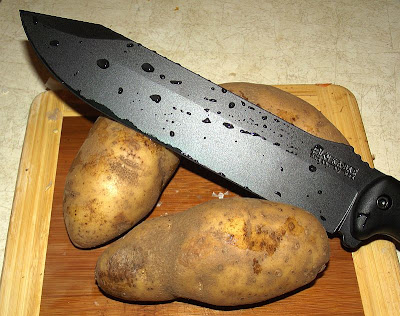 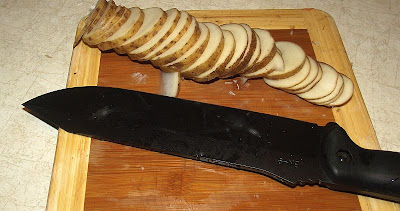 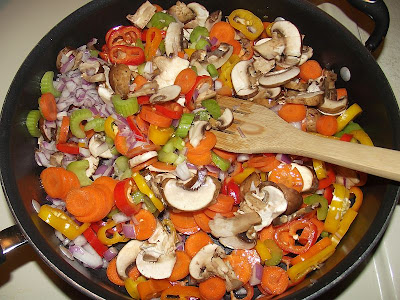 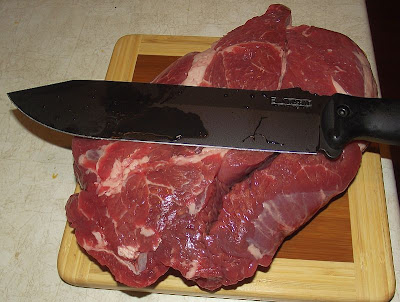 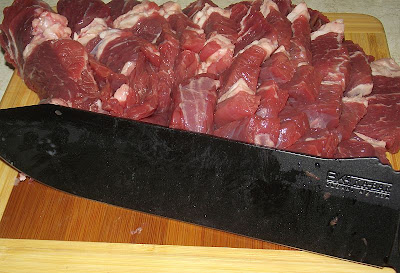 At this point I thought I was stuck, hit the wall, dead in the water on a dead end road, er something like that, then I remembered the special weapons pockets on the Kodiak. Going in as going back or looking for a can opener in the kitchen would be a fools errand. Success! 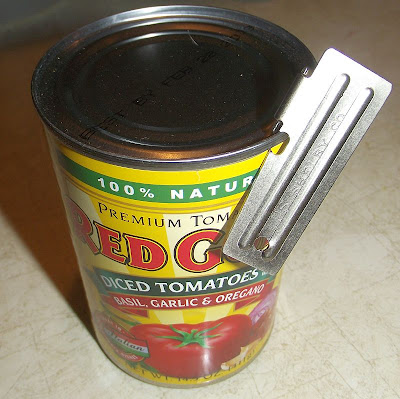 Mopping up time, we're in the home stretch, vegetables have been simmering waiting for the beef airdrop. 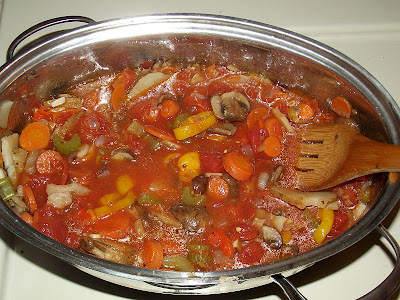 Beef into the fray, let 'er run and voila! 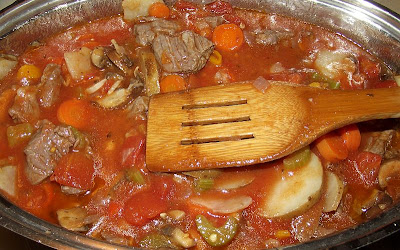 Happy Birthday sweetheart, though I may have enough illumination devices to provide 2 gigazillion combined lumen, you still shine brightest in my life.
Posted by Cro at 20:29