I enjoy a decent lunch when I'm bummin' around the backwoods and I really like my Wetterlings pocket axe, I'm not a fan of cooking over a campfire on the ground. It's not really hard to do or challenging I just prefer cooking off the ground, so I decided to combine my favorite lunch fire, which I call a "stump-fire", my pocket axe and lunch!

I am really fond of Wetterlings whole line of axes but particularly their Hunters Axe and their small axe. Wetterlings is actually owned by Gransfors Bruks, from what I understand they bought Wetterlings a few years back. The Gransfors axes as well as Wetterlings are made in Sweden, hand forged in the old way. While these axes are similar they are not identical, the Gransfors come with a little more polish and fine finishing while the Wetterlings is slightly less so it is still fully functional and a fine piece. At roughly half the cost of a Gransfors they are also a great bargain. 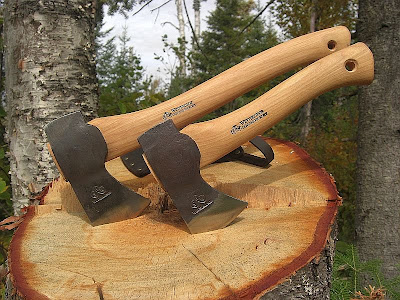 Both are nice in the hand, both arrived shaving sharp though having hand axes that sharp is certainly not necessary.


The history of Wetterlings started over 100 years ago. On a spring day in 1882 the engineer Otto Wetterling disembarked from a train in Storvik Sweden. For several years he had studied the production of axes in the USA. His brother, Sven Axel Wetterling had earlier started producing axes on a small scale in a forge in Storvik. His company was named S. A. Wetterlings Manufacturer, or, in short, S. A. W.

Otto Wetterling immediately became supervisor. Using ideas gained from the new country, and craftsmanship and experience from the old, the brothers created a piece of legendary industrial history. Since then the forge has been in uninterrupted use for almost 125 years.

Today, 10 people proudly continue the tradition of producing world class axes. The forge is in Storvik twenty kilometers west of Sandviken. An area in Sweden where people since time for the vikings have worked with iron.

Wetterling Axes are hand forged from quality Swedish steel alloyed from iron, carbon, silicon, manganese and vanadium. Hand forging uses presses that deliver many blows, making the axe edges stronger than if they were drop forged. The special axe steel alloy makes high quality hardening possible. After grinding, hardening and tempering, the Wetterling axes keep a Rockwell hardness of 57-58. These are the main reasons the Wetterling axes hold a keen edge with good "string" longer than most axes.

The handles are lathed from American hickory. The best stress capacity and resistance to blows make hickory the wood of choice for good axe handles.

An axe from Wetterlings is made to last. With a little care, your axe could last forever.

I prefer stump-fires for quick backwoods lunches, I find them easier to build, nicer to work from, require less maintenance and are easier to cook over. Pretty simple concept really, and if you live near old logging country you'll find plenty of stumps. In my case when coursing my own backwoods I've got several lunch and campsites where I have easy access to stumps.

Using my small axe I cut, chop, and carve out the center into the rough shape of a bowl, including a channel cut on one side that allows good air access as well as a good spot to use the firesteel, more on that in a moment. Here is what the stump with the axe work done looks like: 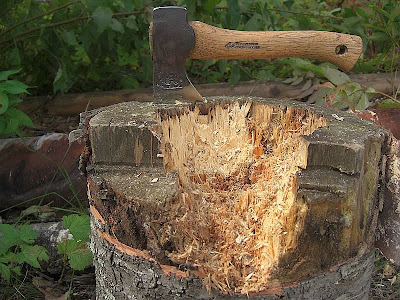 Once I have the rough bowl shape I put in a layer of Birch bark, doesn't take much and where I live it is quite abundant. On this I lay in my tender, more small slivers of Birch bark, ground leaves, and in this case some cuts of cattail as seen here: 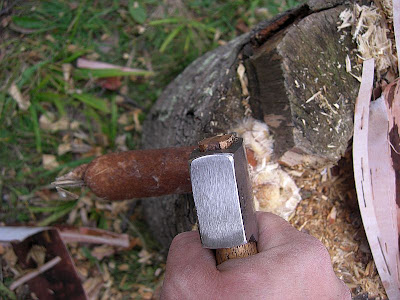 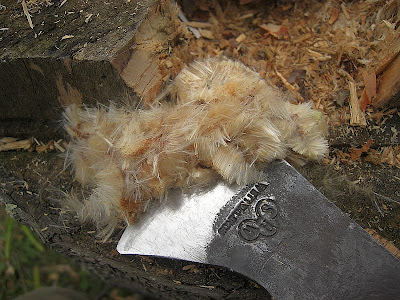 Once you have this you lay it in with the rest of the tender, all in place it looks like this: 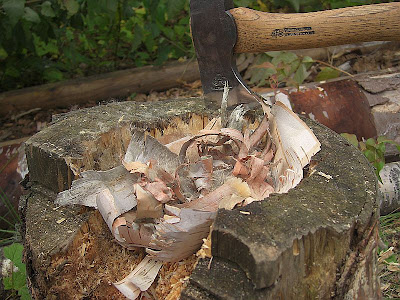 Using the small axe and my firesteel, couple strokes is usually all it takes, get the coal, blow it a bit and shebang, fire! 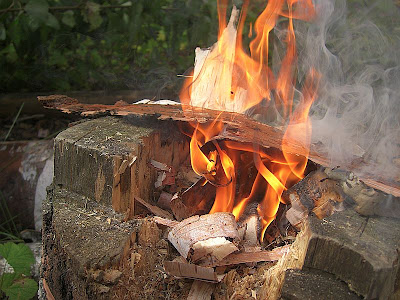 Feed this with twigs, more Birch bark and so on till it's running good. Add a few larger pieces and let it burn down into the bowl. 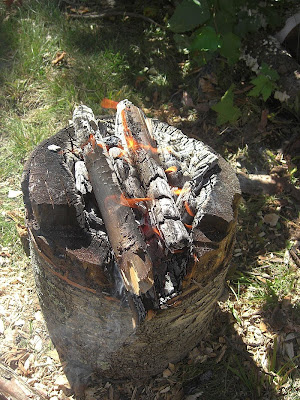 This will burn down into the bowl making a nice bed of coals, the edges of the stump are still good and solid, this makes a nice cooking platform. 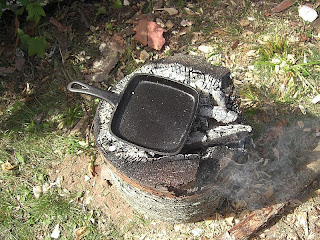 Now, those lovely treasure boxes provided by my chickens just this morning, on my way out. 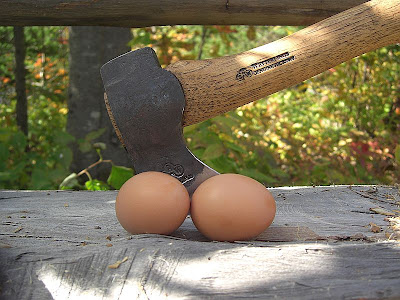 All down hill from here, the small Wetterlings axe is approved for Backwoods Kitchen USE! 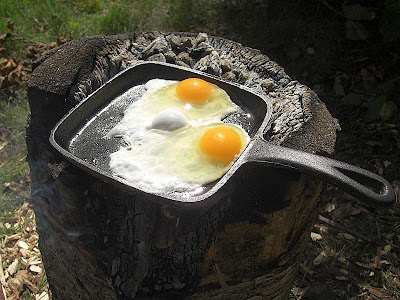 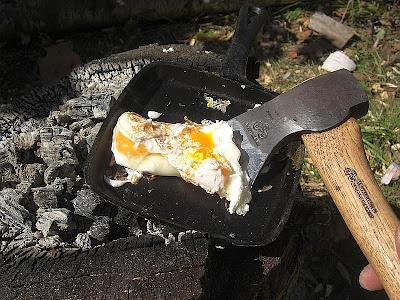 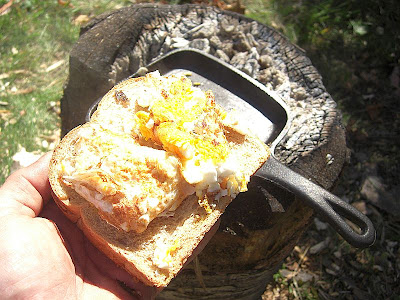 Like I said, nothing quite like a good backwoods lunch, something to be said for enjoying it having made it with tools that have become close friends. The Wetterling Small Axe is a joy to carry and use, something that is always on my side when I go backwoods bummin'. 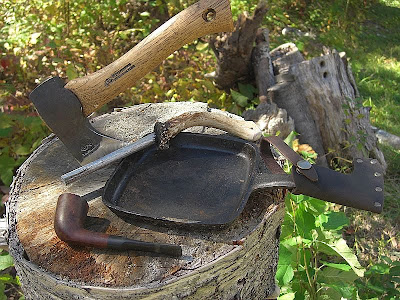 P.S. The leather blade cover for the axe also doubles as a handy pot holder seen here.
Posted by Cro at 16:13