Quick Hike into the High Country -Tribute to the Geezers-

It isn't a new one, in fact this one (of two as I understand it) has been kicking around in the world for a while now. I came by it second had, having bid on it in a charity auction to help another fella out. I'm hoping it helps ya Ka Bar, keep on kickin' Geezer! 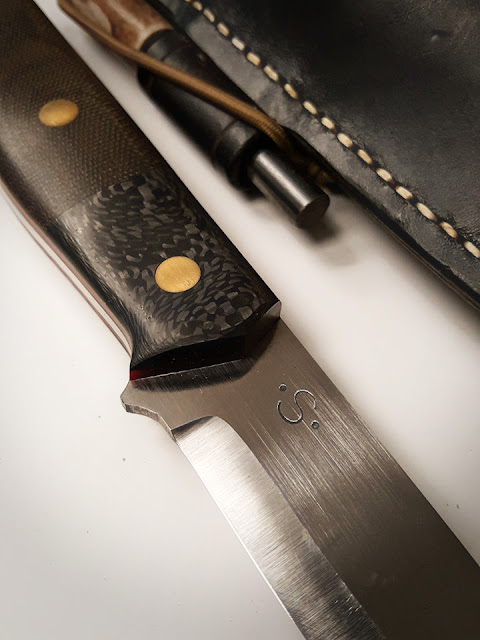 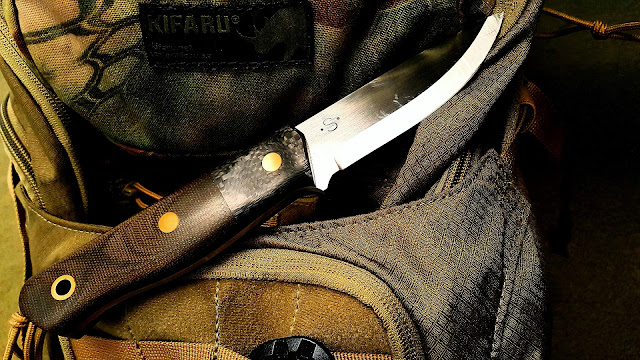 Well it arrived today and with daylight lengthening and a heck of an urge to get out I did just that. Not far away there's a trail head that leads up into the high country. 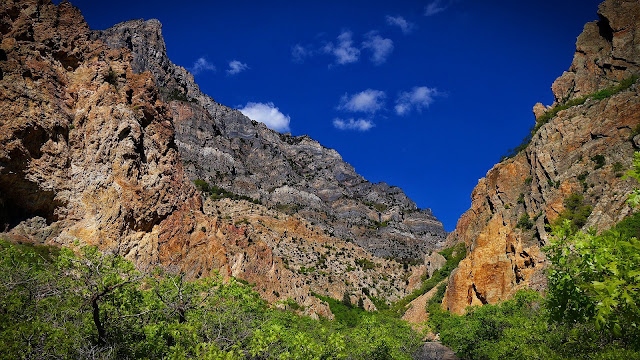 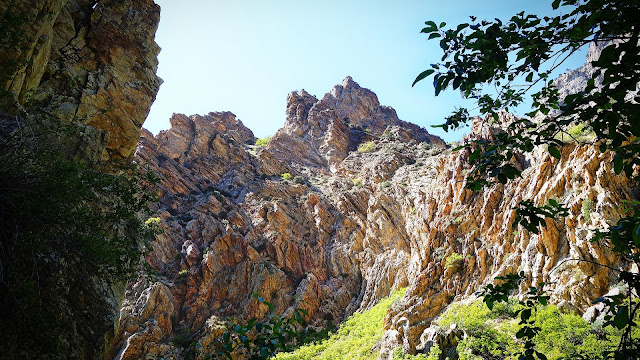 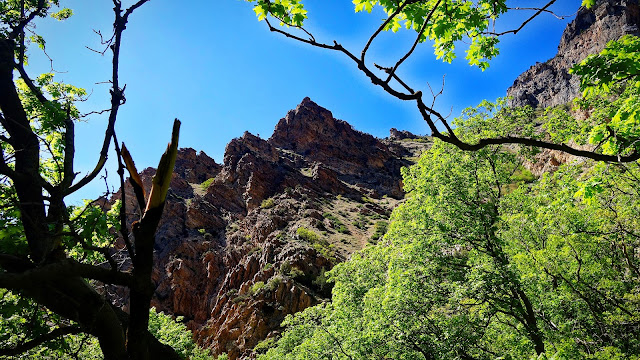 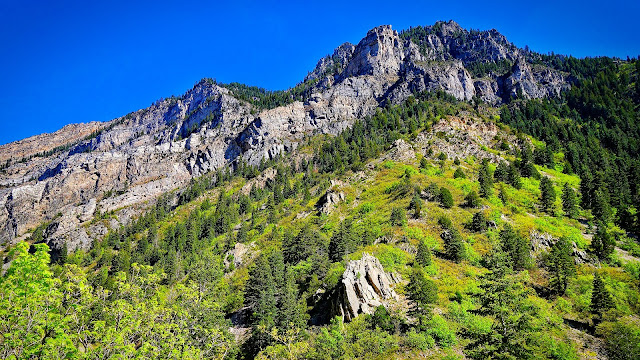 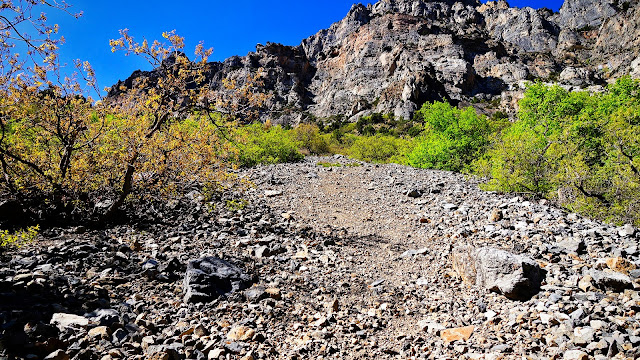 The terrain was steep and rather treacherous but absolutely gorgeous. 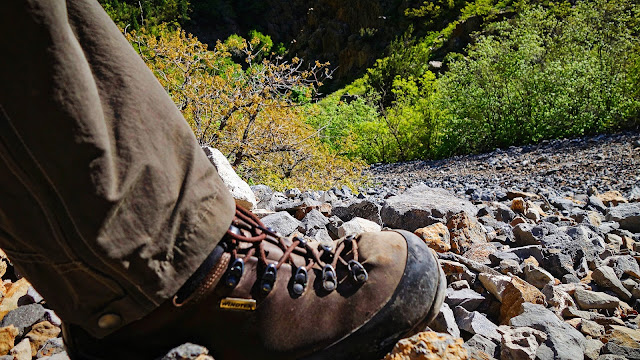 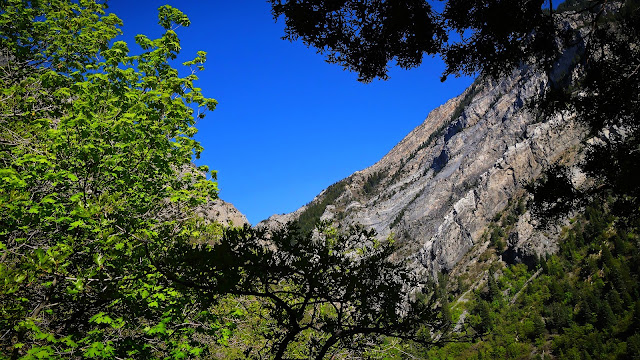 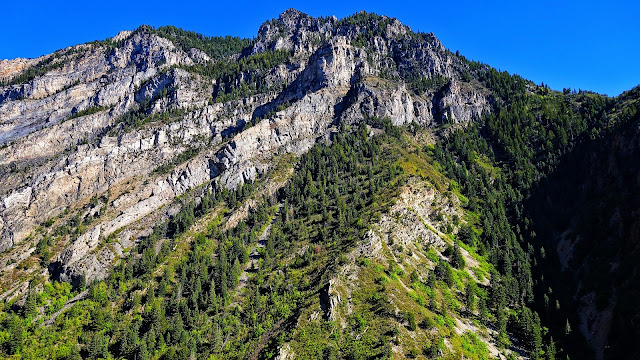 I ran into some ewes, Rocky Mountain Bighorn sheep, I didn't see any males but these females were fun to watch as they crossed the mountain with ease and climbed ever higher. 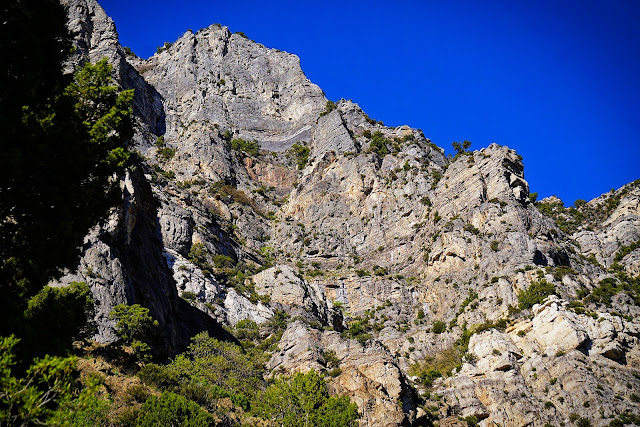 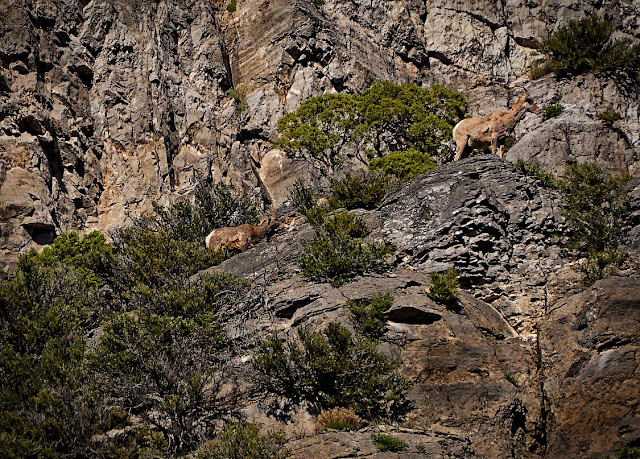 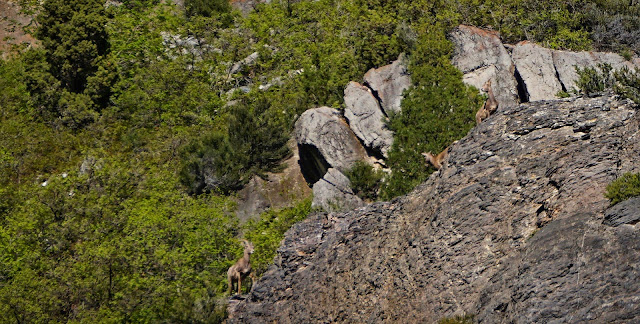 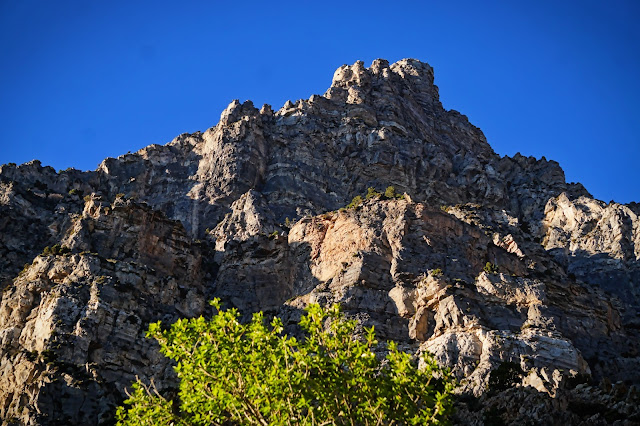 The Centerline Systems 'Mother' was put to use again, along with a new pack. The pack is a 5.11 Ignitor and while general use is fine and it seems great as a day pack with possible overnight capabilities it's got some drawbacks. Once I've finished giving it a go I'll post my thoughts on it.

The 'Mother' continues to impress. 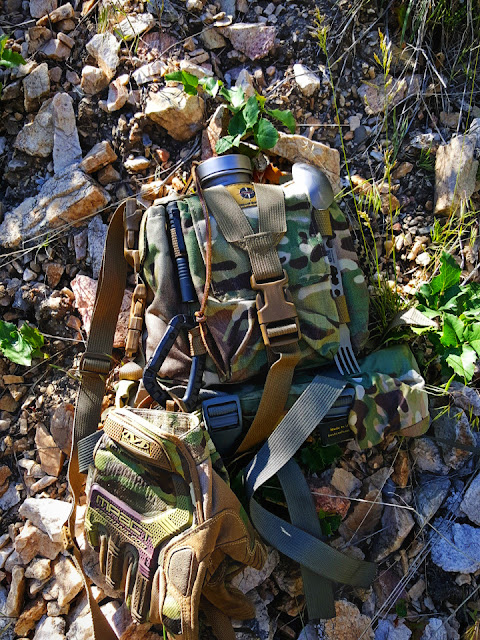 The HC Spork carries nicely in the loop tabs, 2 of 4, on the carrier. Fork end first and the spoon prevents it from sliding through and the bottle cap opener prevents it from accidentally slipping up. Locked in place and since I have nothing else to carry there at the moment it works great for this purpose. 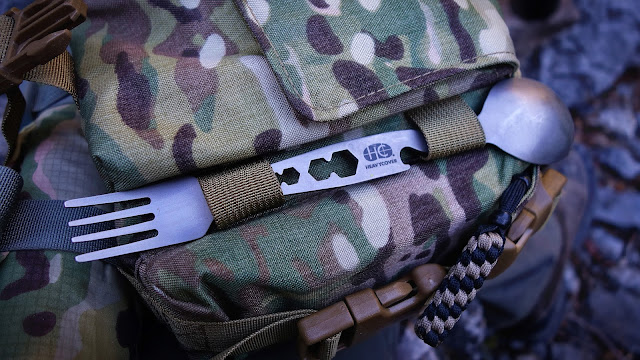 My eyes had dried out significantly at the higher elevation and like a dummy I rubbed them before putting some eye drops in. My right contact slid out of place, up under my upper eyelid. Compass with more than one purpose... 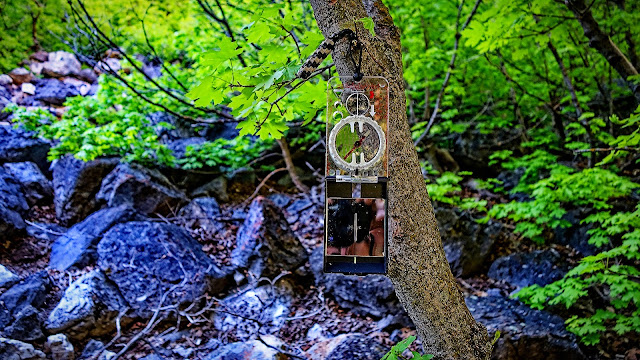 That particular model has a great mirror in it and I was able to slip the contact back to where it was supposed to be without much trouble. I hung it from a sapling at eye level and the task was easy to accomplish. So while it was meant to aid in signaling this one is clear enough to do delicate work. I've used it in the past to remove debris from my eye, handy thing to have.

I set about gathering fire fixins', I wanted something to eat before I started the hike out and besides, I had a new knife with me and that meant fire was mandatory! So after gathering I set up the old Emberlit and got to it. 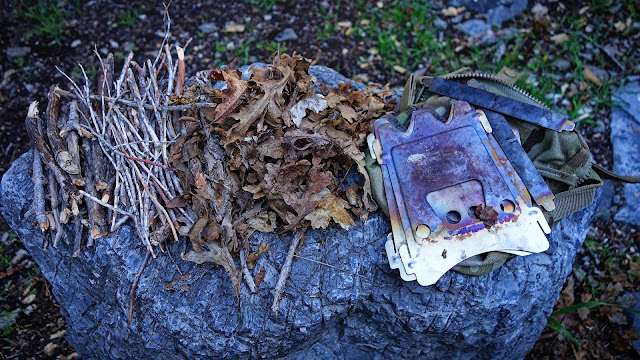 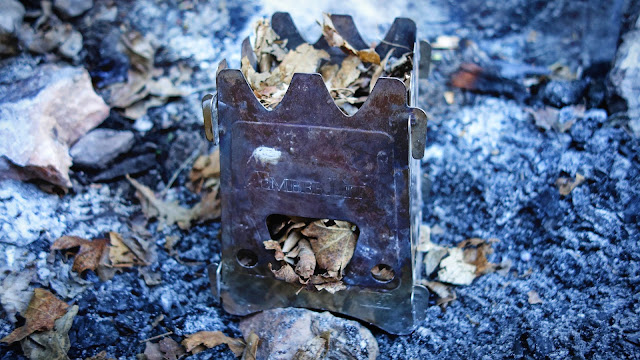 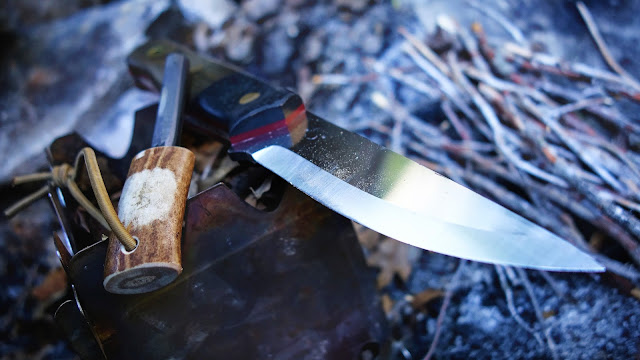 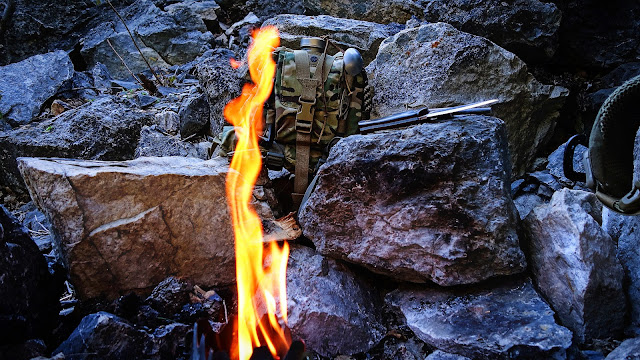 The Heavy Cover canteen cup sits perfectly on this Emberlit, even without the cross bar supports at the top. 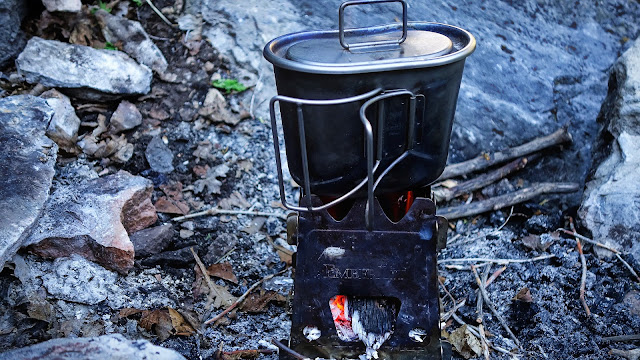 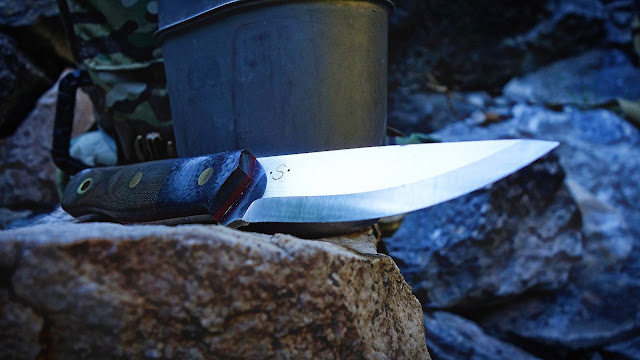 After climbing and then sitting in the shadow of the mountain, hot noodles were just the ticket. 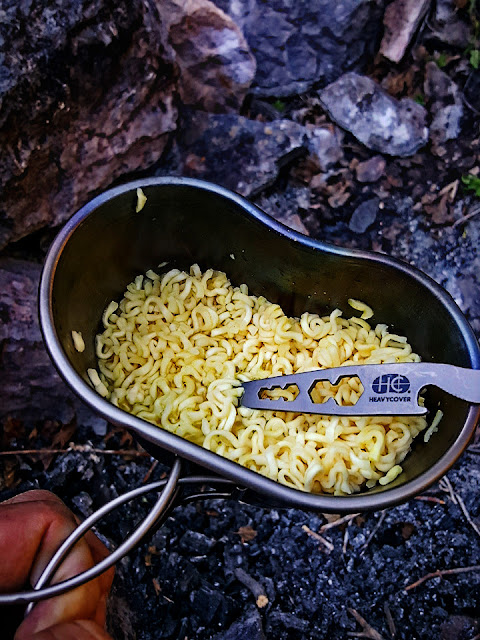 Hiking out was uneventful, though short the hike was invigorating and rewarding. I'm still mesmerized by raw beauty of this place, I think I always will be.